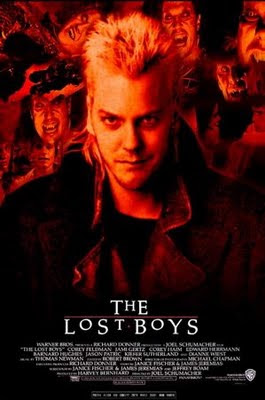 Going back to another classic, The Lost Boys (1987) is the first vampire movie I ever saw--or at least, the first one I really remember--and definitely the first one I loved. I'm pretty sure it's also the source of my longstanding crush on Kiefer Sutherland (although the Jack Bauer years have more or less put an end to that). But enough about me.

The Lost Boys is a story about a mom and her sons moving back to her hometown ("The Murder Capital of the World," according to some disturbing grafitti) in order to start over after her divorce. Chaos soon ensues as the brothers discover there's more to Santa Carla than hippies, bikers, and rampant unemployment. Older brother Michael gets mixed up with the wrong (undead) crowd, and younger brother Sam enlists the help of a couple of wacky locals (the Frog brothers) who have dedicated themselves to eradicating the vampire menace. It all comes down to living long enough to kill the head vampire in order to save Michael and his fellow half-vampires, Star and Laddie.

This movie just seems to have come together perfectly. Whether by accident or luck or seriously good planning, I don't know (and I'm not sure it matters). The cast is great--the two Coreys (Haim as Sam and Feldman as Edgar Frog), Jamison Newlander (Alan Frog), Jason Patric (Michael), Dianne Wiest (Lucy/mom), Barnard Hughes (Grandpa), and, of course, Kiefer as David (I couldn't imagine anyone else in this role). Not to mention Alex Winter (Marko), Edward Herrmann (Max), and Chance Michael Corbitt (Laddie). Oh yeah, and Jami Gertz too (Star), although she was just so-so for me.

The chemistry between the characters, particularly between Sam and the Frog brothers was so very good. What happened to Corey Haim? He was great in this role and so damn expressive--his delivery was made of awesome (watch and you'll see what I mean). I guess turning into an egotistical ass will detract from your skills and charisma. Shame, that.

Grandpa is one of my favourite characters--and he gets the best line too (the one at the end). I'm also a big fan of Nanook (Sam's dog), and he's used to good effect, providing some of the best tension (I don't want to meet the person who doesn't get at least a little anxious at the thought of movie pets being harmed by the bad guys...)

The movie's also got some fine cinematography and sets, and a great soundtrack. The opening shot of the camera swooping over the ocean and into the carnival, where we catch our first glimpse of David is perfect, not least because of the music chosen (the chanting boys choir that's used throughout--love it). And major props have to be given to director Joel Schumacher and the writers (Janice Fischer, James Jeremias, and Jeffrey Boam) for breaking ground with The Lost Boys by making it the first movie to feature vampires as teenagers.

But what's the point of all that unless the vampires are worth watching?

Luckily, they're fantastic. First of all, I like that Schumacher et al didn't go over the top with the vamps. There's something to be said for subtlety (which, unfortunately, too many filmmakers have no clue about). You don't even see a full-out vampire (fangs, bumpy profiles, red-rimmed yellow eyes) until 1:01:30 into the movie. Nice. The vamps are also the perfect mix of human and monster (for me, anyway). Restrained David is just as good as brutal David (the beach scene, where he bites into the bald head of a victim and the blood shoots out--seriously, what's not to love?) The makeup is also really good, especially considering the year this was made. Again, something to be said for old-school skills and subtlety. And I don't know if the actors practiced talking with the fangs in, or if the fangs were particularly well made or what, but I was happy that there was no lisping among the vampires, which even the Buffy vamps are prone to.

I know everyone complains about the mullets, but for the most part I think they work. They were cool at the time (more or less) and now, well, you can't fault a vampire for being out of touch with contemporary fashion. But yes, the movie does look dated now. I guess it should just be viewed as a period piece.

The worst part of the entire movie is the "rocking" scene with shirtless, oiled-up sax guy (aka Timmy Capello). Ew. And gag. And to prove he's just as cheesy in real life, look up his MySpace page.

Cheesy musicians and bad hair aside, this is a great movie (and probably the high point of several careers). You'll probably never see it on any "Top 100 Movies Ever Made" lists, but it's definitely one of the best vampire films, ever. And that's all that really matters, isn't it?

Mythology: Don't need to be invited in, but doing so renders you powerless against them. Half-vampires have drunk a vampire's blood but haven't killed anyone yet (once they kill they become full vampires). Killing the Master/Head vampire reverts all half-vampires back to human. They're heavy sleepers, but they can be woken and they're not completely helpless. They sleep upside down like bats, holding on with deformed, clawed feet. They have no reflection.

Sam: You're a creature of the night, Michael, just like out of a comic book. You're a vampire, Michael. My own brother, a goddamned shit-sucking vampire. You wait 'til mom finds out, buddy!

David: You'll never get old, and you'll never die. But you must feed!


The Blu-ray disc also comes with all kinds of bonus features, including: Inside the Vampires' Cave, Fresh Blood: A New Look at Vampires, Vamping Out: The Undead Creations of Greg Cannon, Haimster and Feldog: The Story of the 2 Coreys, the Vampires' Photo Gallery, A World of Vampires, and the music video for "Lost in the Shadows" by Lou Gramm.

A World of Vampires is a particularly cool bonus feature. It's an interactive map with a bit on vampire legends from around the world. I would have liked more detail, but what is there is interesting and, dare I say, educational. The accompanying artwork is also excellent. It's fascinating to see the similarities in vampire legends/mythology among diverse cultures, sometimes spanning the globe. There's also an interesting bit on the evolution of the Slavic vamp into our modern image of vampires. This is one of those features you want to see expanded and offered on disc in its own right.

Eat garlic to foil the South American asema; garlic makes your blood bitter and therefore uninteresting to the vampire.
Posted by Aspasia B at 8:54 AM