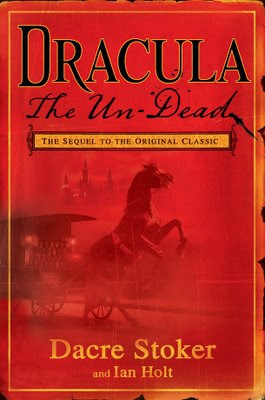 The new trend in publishing seems to be making sequels for books that have entered the public domain. That these sequels almost always end up being abysmal doesn't seem to bother anyone. But forgive me if I'm not holding out much hope for Dracula: The Un-dead, even if (or maybe particularly because) it's written by Bram Stoker's great-grandnephew, Dacre (oh yeah, and Dracula historian Ian Holt). The mere fact that Dracula has been made over into a sympathetic character (effectively rewriting the original) is enough to set my skeptic sense tingling. I'll do my best, however, to reserve judgment until I actually get a chance to read it.

Dracula: The Undead by Dacre Stoker and Ian Holt. From Dutton. Available 13 October 2009.
Posted by Aspasia B at 2:49 PM