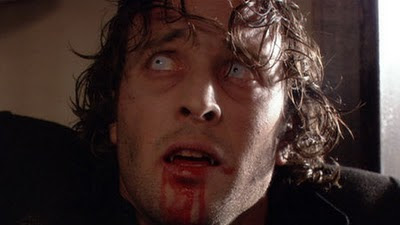 If there's one recurring theme throughout the world of redemption-seeking vampires, it's that the past will always come back to bite our reformed monsters (purely evil vampires don't tend to have such issues). Mick St. John's past isn't as long as some (he was turned in the late 1950s/early 1960s*) but it's long enough to be fertile ground for regrets and recriminations. "Out of the Past," as you can probably guess from the title, is all about one of them.

The episode starts with a "wrongfully accused" murderer, Lee Jay Spalding (David Fabrizio, Desperate Housewives), being released from prison after 25 years. While most of the world (and particularly Beth's friend Julia) is enamoured with the seemingly decent Lee Jay, Mick knows better.

Via flashback to 1983 we learn that Mick was hired by Lee Jay's wife, Ilene, to protect her from her psychotic husband. After Mick thrashes Lee Jay, making sure he understands he's to stay away from Ilene or else, Mick believes the problem is solved. Until Ilene turns up dead. Incensed, Mick tracks down Lee Jay and gives the terrified murderer a good look at him in full-on vampire mode. Sinking his fangs in and preparing to finish Lee Jay, Mick is suddenly interrupted by the arrival of the cops. Oops. He's forced to take off before they see him, while Lee Jay has the next 25 years to research and study vampires.

Back in the present Mick sets out to prove Lee Jay's guilt (and prevent any other women from ending up dead), while Beth starts having questions about Mick. Her dreams are filled with memories of her childhood abduction, while the buried knowledge that it was Mick who saved her is beginning to surface. She knows he's hiding something from her, but she can't figure out what. The situation gets even more complicated when Beth sees an old photo of Mick St. John in Julia's book on Lee Jay (note to vampires: you might want to change your name every twenty years or so if you plan on staying in the same city).

Once again the crime aspect of the show is mediocre. It could have been interesting had it been given more time (maybe two or three episodes) but it felt rushed. Still, there were a few unexpected twists, so not all bad. And once again the relationship between Mick and Beth shines. They have a connection between them that draws you in. I know I want to see more of the two of them together. Luckily, I have no doubt I'm going to get my wish.

I'm also enjoying that so many of the flashbacks (actually, I think all of them so far) take place in the 1980s. The party this episode with Duran Duran's "Hungry Like the Wolf" playing in the background? Nice. It's also nifty to see a bit of Mick before he acquired a pesky conscience. Hey, even rehabilitated vamps need to remind us about the monster every so often.

The episode ends with Mick staggering home wounded and desperate for blood. Beth arrives looking for him just as he's all vamp faced and sucking down a bag of plasma (bonus points for using the outlet tube as a straw). He tries to hide from her but there's no getting away this time. Beth sees him in all his glory, and he's forced to admit what he is. The next episode should be interesting.

*In my previous review I said Mick was 90: I should have clarified that I meant 30 years as a human + 60 years as a vampire.

By the way, supposedly you can watch the full episodes on CBS's site but I just get a blank page when I click on the link. That could be because I'm in Canada and somehow civilization as we know it will come to a crashing halt if Canadians download shows from American network sites. The horror! But give it a try and see if it works any better for you.

Appearance: Human, until the vampire emerges; then, ghostly white eyes and fangs that descend or retract at will.

Mythology: Vampires don't appear in photos taken with film, but digital devices will capture their images.

Mick: When you live forever it's disappointing how little humans change.

Beth: Why does the girl always have to wait in the car?

Moonlight, Season 1 Episode 2 "Out of the Past." Written by Trevor Munson and Ron Koslow. Directed by Fred Toye. From CBS/The CW.
Posted by Aspasia B at 1:59 PM