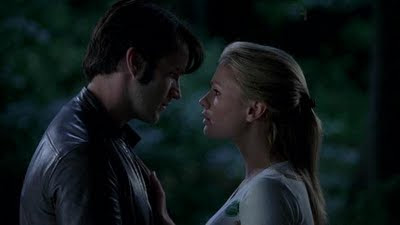 There's a maxim in TV land that as soon as things start going well for the hero and heroine, something bad has to happen. It adds to tension, keeps the story interesting , helps with character development, so on and so forth. It's a rare show that doesn't mess with its characters this way. So am I wrong in wishing that True Blood had tried something different?

Just when things were going so well for Bill and Sookie, Eric shows up with his "reasonable request." Fine, that's what Eric is there for. But at the beginning of "Plaisir D'Amour" when Long Shadow attacks Sookie as the other vampires watch indifferently and the humans panic, Bill is forced to stake the older, stronger vampire. Beyond the ensuing carnage that looks like a scene cut from Carrie, this act marks the end of Bill and Sookie's happiness. Didn't last long.

Part of the problem is the twelve-episode season. The writers and directors try to cram in a fully developed storyline in half the number of episodes a show usually gets--things get cut, things get rushed. Relationships hit snags way before they should. What can you do? At least it's not as bad as The Tudors, where plague outbreaks that would have lasted months in reality begin and end within the span of half an episode. But if HBO found a way to grant an extra hour or two--or twelve--to True Blood, this fan would be most grateful.

Anyway, back to "Plaisir D'Amour," Eric takes advantage of the situation by trying to get Bill to exchange Sookie for his silence on Long Shadow's killing. Bill won't give her up. He tries to reason with Eric, asking what Eric would have done to Long Shadow (given that he was stealing from Fangtasia) had Bill not staked him. Eric smirks that whatever he would have done, he wouldn't have done in front of witnesses--especially vampire witnesses. Bill is screwed. But he doesn't let on to Sookie, trying to reassure her that everything will be okay. She's quick to believe him, probably because she's still in shock from all the recent murders of people she loves, including--as she discovers when she gets back from Fangtasia--her cat.

Okay, I have to go off topic here for a second. I kind of understand why the killer stalking Sookie would kill her cat. He's trying to terrorize the poor girl, to taunt her and make her suffer before he finally gets her. Or maybe he was simply enraged that she wasn't home when he came looking for her, and took it out on her cat. Either way--it doesn't really matter. At least there was some kind of point to it, and it was portrayed as a horrific and traumatizing act (as it would be). But am I the only one who's had more than enough of cats (and other animals, although it's usually cats) being "killed" for entertainment purposes? There used to be a time when pets were off limits in horror shows. Now you can watch any show--any show--and if you see a cat at some point you know it'll eventually end up dead. And not from old age. And if they can throw in a good yowl beforehand (such as cats emit when, say, their tails are accidentally trapped in a door) so much the better. I would just like to point out to all the writers/directors/producers out there that torturing and killing animals onscreen is not entertaining. At all. And those of you who include such things in your shows for laughs have serious, serious issues. If I wanted to see that sort of horror, I'd watch the news.

Sorry about all that, but it had to be said. And once again, back to the episode...

After Bill promises he'll take care of Sookie and will never leave her, he has to leave her. It's not his fault--blame Eric as he shows up to complicate things. This time he has to take Bill to a vampire tribunal where he'll be put on trial for killing Long Shadow. This is an interesting twist--vampires generally kill one another without consequences. They're all monsters--who cares, right? At worst they might end up earning the enmity of other vampires (like Spike does when he starts helping Buffy and the Scoobies). But an official judiciary process is unusual. And in this case, worrisome. People don't usually get away with murder--how will Bill? At least Eric lets him go to Merlotte's first to explain the situation to Sookie and ask Sam to watch over her. Bill and Sookie get one last passionate kiss before Eric snaps that they have to leave, and then Bill walks away. Maybe forever (okay, you know that's seriously unlikely, but still...) It's enough to make a girl cry. Although Sookie doesn't seem too broken up; she must be the queen of repressing. At least she and Tara finally make up after their fight (and that lasts until Sookie sees Tara and Sam undressing each other. Oops).

While Bill is tying up loose ends, Pam and Eric hand out passes to Fangtasia. Only the redneck who burned his arm torching the scary vampires doesn't get one. When he protests, Eric asks how he burned his arm. Eric then announces to the entire bar that vampires know when humans have wronged them (he looks right at Amy as he says it) and that there will be retaliation for those wrongs. This is just the right kind of creepy. Do they really know? And if so, how? Can't wait to see how they deal with the redneck (and Amy too, hopefully).

Speaking of Amy, things aren't going so well with her and Jason. He's angry with her about the situation with Eddie, upset when he realizes she's kidnapped vampires before, and is starting to notice her annoying hippie condescension. All promising until the lure of the V pulls Jason back in. They get high, have sex (so much for being a "respectable girl"), and commune with nature. Amy is not only grating, she keeps reminding us she's evil too (despite the sweet and helpful facade she puts on at Merlotte's). As she and Jason are getting high (and frisky) on V, Amy insists on pausing to thank the vampire (tied up a few feet away) for the gifts he's bestowed on them. Eddie is about as impressed with her as I am. And yet later she tells Jason that vampires are not people, shows no concern about the prospect of Eddie starving to death, and claims that she "deserves" everything to work out for her. Uh, yeah. Jason ends up talking and bonding with Eddie, although he gets angry to a degree that screams "protesting too much" when Eddie suggests that Amy is a psychopath. Despite his anger, he later buys Tru Blood for Eddie and feeds it to him, reminding me why I like Jason so much, and offering some hope that he'll eventually see Amy for what she is.

Tara, as usual, is going through her own issues. She struggles with her doubts even as she starts believing she needs an exorcism. As Sam points out, who knows what else is out there besides vampires--why shouldn't demons exist? She's also struggling with the price tag on Miss Jeanette's services: $799.95, more than double what Tara's mom paid for her exorcism. Apparently Tara's demon is stronger and more dangerous. (Don't you love the price? Miss Jeanette clearly has experience in retail.) Wanting something more with Tara than just sex--and also wanting the constant fights to end--Sam gives Tara the money she needs. She reluctantly, but gratefully, agrees to take it.

And Sam is finally outed! We don't actually see the transformation but when Andy Bellefleur confronts him about the false story he gave about growing up in a nudist colony, Sam runs back inside Merlotte's to "get something he forgot," and a moment later the dog comes running back out. The dog then shows up at Bill's, where Sookie is spending the night, seems to understand everything she says to him, and looks away while she's changing. When Sookie wakes up because the dog is lying on her feet, she finds naked Sam lying there instead (his reaction is priceless--as she screams in shock, so does he). Now the question is--what is he exactly (were-dog)?

Will the exorcism help Tara? Will Jason do the right thing, or will he let the V keep controlling him? Will Bill and Sookie ever see each other again? Will Eric ever exhibit an actual emotion? Tune in next review to find out the answers to these burning questions...and more...

Appearance: Vampires look like pale humans. Fangs (resembling snake fangs) unsheathe at will. Their appearance also doesn't change after they're turned (if they're out of shape beforehand, they'll be out of shape afterward).

Mythology: A staked vampire projectile vomits blood before collapsing into a pool of liquid. Vampires are basically made up of blood held together by a little skin and hair. A vampire who doesn't feed for even a short while becomes badly weakened, lacking in energy and susceptible to extreme pain. Not all vampires have the same skills and abilities; according to Eddie, learning how to be a vampire doesn't happen overnight.

Pam: (to Sookie) You've got vampire in your cleavage.

Amy: Jason, can you please try to live in the now with me?

Pam: (as Bill and Sookie kiss) If I had any feelings, I'd have the chills right about now.
Eric: Not me.