Vlad the Impaler: The Man Who Was Dracula 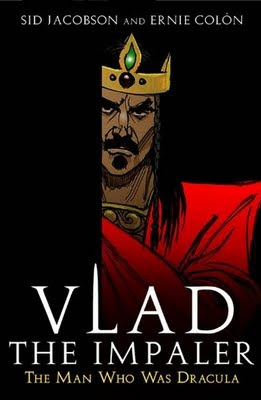 You wouldn't expect the people who brought you Richie Rich and Casper the Friendly Ghost to turn around and create a graphic novel about Vlad the Impaler, but if a 19th century Irish novelist can use him as his muse, why shouldn't Sid Jacobson and Ernie Colón be equally inspired?

For those of you who aren't aware, Vlad Dracula (aka Vlad Tepes aka Vlad the Impaler) was a 15th century Wallachian (Romania) prince and all-around psycho. He was an equal opportunity torturer and murderer with a penchant for impalement (nothing better to keep the riffraff out than rotting corpses--or squirming bodies--on pikes). Legend also has it that he was nearly impossible to kill, surviving where other men would have succumbed, and giving rise to early vampire rumours. Bram Stoker took inspiration from Vlad Dracula's history and used the name for the vampire Count in his own tale. So you can see why I jumped at the opportunity when Penguin offered to send me a review copy of a graphic novel about him.

Vlad the Impaler: The Man Who Was Dracula purports to tell Vlad's life story in all its gory detail, although I'm not too sure how accurate it actually is (the parts with Countess Flora leap immediately to mind). We'll just chalk it up to creative license. The writing is also clunky in parts ("Prince Vlad himself fought like a Greek god on a mission"), often tending to verbosity. It would have been nice if the narration could have taken more of a backseat to the artwork, letting the drawings tell the story rather than merely illustrating it.

And there is some really nice artwork in Vlad the Impaler, particularly some of the two-page spreads and, surprisingly enough, many of the impalements. They're disturbingly well done. At other times the artwork seems to be lacking in potency; this graphic novel might have benefitted from a slightly larger or longer format (or maybe just fewer small panels ).

The colour work is also nice, although maybe a bit on the obvious side. Most of the "good" characters seem to be blonde or fair, while the schemers and evildoers are raven-haired. Vlad's brother Radu looks like a golden cherub while Vlad always manages to seem a little darker than those around him, especially as he ages and becomes more brutal--brilliant from a character development standpoint, but also a little confusing, visually (why is adult Vlad so drastically different from childhood Vlad?) But colour is put to good use to portray the starkness and horror of certain scenes, utilizing simple yet highly evocative palettes. As well, the brightness of the hues in the depictions of the Ottoman Empire contrast nicely with the melancholy shades surrounding the Christians within it (although at one point I was reminded a little too strongly of the scene in The Simpsons episode "Home Sweet Homediddly-Dum-Doodily" when Maggie's viewpoint switches from the Flanders family--all rainbows, flowers, and blue sky--to drab and dismal Homer, Bart and Lisa accompanied by scary dead trees and angry frogs). Like I said--a bit on the obvious side.

Vlad does finally meet his end (what--you didn't think he was still around, did you?) with the novel nicely depicting post-mortem fangs in his mouth. This is followed by an unexpected conclusion--and possible set-up for a sequel. I'm not sure how I feel about this final bit--to be honest, I don't think it entirely works. But I would be interested in seeing how a sequel plays out.

Vlad the Impaler doesn't give you Vlad Dracula's full story--you would need a series of graphic novels to do that. But it does give you a taste of an intriguing and disturbing history, and every vampire knows that sometimes a taste is enough.

Vlad: The Sultan has given me a huge force to help me regain Wallachia, Radu. Will you join me?
Radu: I cannot, Vlad. This is my home, these are my people, Allah is my god.
Vlad: And Mustafa is your lover! Our father would piss on you!

Vlad: (to his closest friend after slashing him with his sword and leaving him to die) And if I had time I would impale you. Goodbye, Stefan.

Vlad the Impaler: The Man Who Was Dracula. Written by Sid Jacobson. Art by Ernie Colón. From Hudson Street Press (Penguin).
Posted by Aspasia B at 2:50 PM