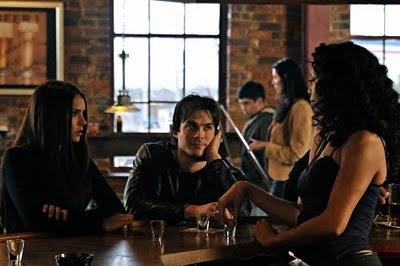 First off, I have to apologize for the lateness of this review. I may or may not have lost my notes in my own house *cough* But I have them now so let's not dwell on what might have been...

After the previous episode of The Vampire Diaries, "Bloodlines" (nice title, by the way) could have gone anywhere. The place I did not expect it to go, however, was a road trip. I kind of have to question what the writers on this show are thinking. But let me backtrack for a second.

When we last saw Elayna, she'd hit and mangled a person with her car, only to watch as the person instantly healed and started approaching her as she sat trapped and panicking. Promising, yes? Well, kiss that promise goodbye: mystery person decides for no apparent reason to take off. Then Damon shows up, gets Elayna out of the car, checks for injuries (conveniently none worth worrying about--see, flipping your car is no big deal), hides said car (which, of course, no one will notice, despite the fact that it looks like a crushed soda can), and takes her on a jaunt to Georgia. Might I just say: WTF?

But it gets better!

After a minor debate about being taken home, Damon somehow convinces Elayna that the whole thing will be a fun day out. She's satisfied so long as he promises not to compel her (an issue now that she stupidly took off the vervain-containing necklace). And for some reason he keeps his word and doesn't compel her. I guess he suddenly has scruples. Once again something potentially interesting has been set up (Elayna making herself vulnerable to compulsion) and promptly ignored. So much for the show's big cliffhanger--it seems to have turned into one big pointless fakeout. Woo.

Once in Georgia, Damon pays a visit to his clearly bitter ex, Bree (Gina Torres), a witch who he believes can help him figure out how to overcome Emily's spell and free Katherine and the other vampires from the tomb. While he's busy with that, Elayna drinks the regulars under the table and shows everyone just how much fun she can be. Bree, meanwhile, sets Damon up for a staking--not because he did her wrong, but because she's upset that he killed her good friend Lexi. Calling in Lexi's formerly human (now vampified) boyfriend to do the job, Damon is saved by...Elayna. Not only does Elayna save him but she begs--literally begs--for his life to be spared. Why the hell would Elayna even want Damon to live? Isn't he the guy who killed a bunch of people she knew, turned Vicky, compelled and fed on Caroline, ripped open Bonnie's neck, and threatened to kill Elayna herself (more than once) before taking her across state lines against her will? Sure--why wouldn't she want to save him--makes perfect sense. And as concerned as she is about him, she disappears pretty quickly when he goes back into the bar to confront the woman who betrayed him. Doesn't even ask him what happened with Bree. (For the record, a terrified Bree tells Damon that he needs to find Emily's grimoire and reverse the spell, just in time for him to rip her heart out with his bare hands. Guess he's done with scruples.) Elayna and Damon then have a nice chat on the way home about how much they like hanging out with each other. Right.

By the time Elayna gets home, she's ready to make up with Stefan--after he grovels an acceptable amount (can't have an episode without that). He tells her that he's known she was nothing like Katherine since before he ever met her. It turns out he was watching her from way back and, oh yeah, he's the one who saved her when her parents' car went over the bridge with her in it. He tried to save her parents too, but you know, it's not like he has vampire speed or anything. When Elayna angsts about why she looks just like Katherine, Stefan drops another bombshell: Elayna was adopted! Seriously? I guess incest is big in Mystic Falls because apparently there's no way the two families could have hooked up in the last 150 years. Not only that but in a town the size of Mystic Falls is there really any way Elayna could have grown up without hearing something about being adopted? Sigh--and the melodrama continues.

In other events this episode...

*Alaric Saltzman flashes back to his wife (Mia Kirshner), ending with his discovery of Damon draining and killing her.

*Bonnie realizes her powers are gone. Gram tells her she needs to confront whatever scared them away. Stefan helps her get her mojo back.

*Stefan and Bonnie's Gram (Sheila) go way back. Bonnie's family have been loyal to Stefan--but Sheila warns him that her family comes before any other loyalty.

*Jeremy makes a nifty new friend (Anna, played by Malese Jow, Hannah Montana) and together they start realizing that vampires are real and hanging out in Mystic Falls. They're also cluing in that their ancestors knew about the vamps and made an effort to fight them.

Despite so much going on in every episode of The Vampire Diaries, nothing ever seems to actually happen--at least nothing that's not predictable, pointless, or just plain illogical. That's probably why I spend so much time checking the clock whenever I watch this show. Even with all the various plots, subplots and asides, there's really not much to hold my interest, and definitely nothing worth caring about. The Vampire Diaries has a lot of potential, but when it comes to a good story, potential just isn't enough.

Mythology: As long as vampires regularly drink blood their bodies function as though they were still alive (that's why they can eat and drink). A starving vampire will initially be in a lot of pain but eventually their bodies desiccate and they (supposedly) no longer feel pain.

Damon: (after Elayna regains consciousness and insists that he pull over immediately) Oh, you were so much more fun when you were asleep.

Elayna: Can I trust you?
Damon: (shrugs and smiles) Get in the car.

Elayna: I saved your life.
Damon: I know.
Elayna: And don't you forget it.

The Vampire Diaries, S1 E11 "Bloodlines." Written by Kevin Williamson, Julie Plec, and Sean Reycraft. Directed by Dave Barrett. From The CW.
Posted by Aspasia B at 1:03 PM