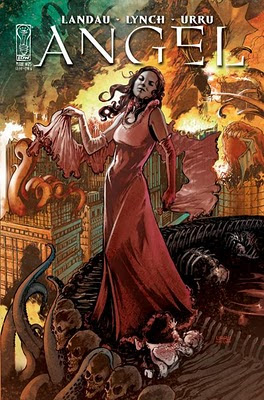 Wow--when I reviewed Angel #24 way back in August, I had no idea it would take me this long to get to issue #25. Hope it was worth the wait...

When we last saw Drusilla, she was in the process of escaping the confines of a pre-Fall LA insane asylum, on her way to unleashing her psychotic self on an unsuspecting city. Well, she never quite makes it outside the asylum. After indulging in a minor massacre, interspersed with memories of Angelus killing her family and turning her, Dru is suddenly overcome with visions of LA's imminent trip to hell. For some reason she decides to start drawing everything she's seeing, which is strange as that's hardly Drusilla's M.O. I'm also not really enjoying it as a plot device, but I think that's just me more than anything. It's actually pretty brilliant in a comics context. In a Drusilla context, however, I don't think it works (part of her immense charm is her speech).

Anyway, she apparently missed a couple of the doctors on her killing spree and they suddenly show up and start psychoanalyzing her through her drawings. Never mind about restraining her or--better still--keeping their distance from the woman who just slaughtered an entire hospital full of people; no, no--let's stop and look at the pretty drawings instead. She does warn them to run and save themselves, but of course they think it's all part of her delusions. Somehow she then has time to create an elaborate, full-colour drawing of a group of people glaring out at her. I recognize a few people in the group: her chaos demon ex, a doctor she killed in the last issue, the Anointed One, and--although it's hard to tell for sure--the nerdy vampire minion Dalton whom she handed over to The Judge in the Buffy episode "Surprise." I guess these are all supposed to be people she's wronged. The next thing we know she's vamping out and the entire group from her drawing is in the room--which seems to have attained warehouse-like proportions--with her.

The end is left ambiguous. Is Drusilla in her own hell? Has she somehow made it to to a more pleasant afterlife? Is it all just part of her insanity? Will we see her again? If there are answers to these questions, we're not about to find out anytime soon. There's also a repeated focus on a jewelled pendant in the flashback scenes--will it end up being important in future issues? Maybe, maybe not--but it didn't seem to go anywhere in this issue.

The artwork is nice in issue #25, particularly Franco Urru's cover; I can't get over how perfectly he's captured the essence of Drusilla. Inside, colour is used to full advantage, using limited palettes for the present and past, almost lurid colour for Dru's drawings, and light-filled tones for the ambiguous ending. Very nice indeed. There's some interesting framing, as well--you won't get bored looking at this issue, that's for sure.

There's also a few bonus pages of Juliet Landau photos where she's trying on different characters (the female Tyler Durden ones are great, but the ones of her as a blonde make me want to break out the black hair dye on her behalf). There are a couple of bonus pages of artwork too.

I have to say, though, that I found this issue fairly unsatisfying overall. Although the focus was Drusilla, there didn't seem to be enough of her. It also didn't resolve anything (like how did she end up in an insane asylum in the first place?) There are a lot of advantages to storytelling in comic format--namely the ability to have anything happen--but there are disadvantages as well. In a universe as elaborate as the Buffyverse, all too often we seem to be left with gaps and loose ends. To think you can capture all the storytelling ability of an episode of Buffy or Angel in one or two issues of a comic is ludicrous. I'm really hoping we have fewer one-offs and asides and more issues to do with the overall story arc. It's tiring to always be left with unanswered questions.

Drusilla: I wonder how long this will last?

Angel Issue #25; art by Franco Urru. Written by Juliet Landau and Brian Lynch. From IDW Publishing.
Posted by Aspasia B at 12:27 PM