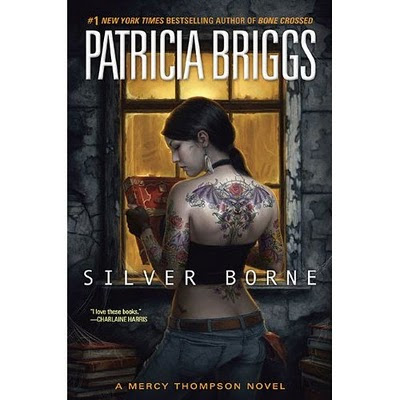 I was excited to get an email from Penguin a couple of weeks back letting me know that they had not one, but three, vampire-related novels available for review. I'm always up for a bloody good read. So I decided to start with Patricia Briggs's Silver Borne (not sure why I chose that one first--although the nifty cover art is pretty inviting).

Silver Borne is the fifth "Mercy Thompson" novel by Briggs. This is the first one I've read, but it doesn't seem as though you really need to read the books in order (not that it would hurt, if for no other reason than for the sake of context). From what I gathered, Mercy is a were-coyote and auto mechanic. Her mate (Adam) is the local werewolf alpha, which is an issue as the other wolves aren't too pleased about the presence of a coyote in their pack. It also seems that our heroine has a tendency to get herself into some serious scrapes involving fae, witches, and vampires.

I should point out that no vampires actually make an appearance in this novel, but since they exist in the Mercy Thompson universe I decided it would be okay to review the book on Blood Lines. Vampires are mentioned, though, and I get the feeling they're purely bad guys.

Silver Borne focuses mostly on werewolves, fae, and a nasty witch. There are mysteries to be solved and friends to save. There are also sub-plots about a suicidal werewolf, as well as the fracturing of the werewolf pack. In other words, there's a hell of a lot going on.

My first impression of the book wasn't a great one. The first-person narration put me off, as did what seemed like an unremarkable paranormal romance/mystery framework. But then Mercy had to deal with the lingering effects of a rape (not a spoiler--this happened in a previous book) and I was suddenly intrigued. The main character had more to her besides the usual "spunky, independent woman with a soft side" stereotype. And the more I read, the more I liked Silver Borne. This book has depth. Mercy and Adam's relationship has problems that they need to navigate. The other characters have some serious issues, and aren't always nice/reasonable people. The other species (witches/fae) have their own well-thought-out mythologies, and are individuals rather than one-dimensional "creatures." I also liked that consequences from events in previous books are still felt in this book; happily ever after only works in fairy tales (even then I still find myself wondering "what about..."). And there's a plot! It's not just about the wacky adventures of our heroine, punctuated by sex with the requisite manly man. The book is light without the fluff, and complex but not convoluted. Just the sort of read I enjoy.

I would have liked more fleshing-out of the sub-plots, and I did think the conclusion was wholly unsatisfying, having been reached a little too quickly and easily (can you say anti-climactic?) There was so much more that could have been done at the end. But despite this disappointment, I'm still interested in reading more of the Mercy Thompson novels (especially the ones involving vampires).

Also, judging by Silver Borne, these books will be appreciated by readers who prefer a more PG type of paranormal/romance novel. No real swearing (characters might start but they never quite get the entire word out), no over-the-top violence, and minimal sex (and in this book at least, what there is only occurs between fully committed partners). But the restraint doesn't come off as preachy or annoying (except in the case of the character Bran, who sounds like a bratty teenager rather than an ancient alpha werewolf--sometimes it's okay to swear--really); it's still enjoyable to those of us who aren't opposed to R-rated material.

I recommend Silver Borne to anyone who likes a bit of action with their romance, who has an interest in paranormal mythologies, and who enjoys being kept guessing. No vampires this time around, but still a good read.

Mercy: [re: the pack's opposition to her] "They're adjusting as fast as they can," I told him. "First there was Warren--did you hear that after you let him in, several other packs have allowed gay wolves to join, too? And now there's me. A coyote in a werewolf pack--you have to admit that's quite a lot of change for one pack to take.
Adam: "Next thing you know," he said, "women will have the vote or a black man will become president." He looked serious, but there was humor in his voice.

Silver Borne by Patricia Briggs. From Penguin (Ace Books).
Posted by Aspasia B at 12:27 PM