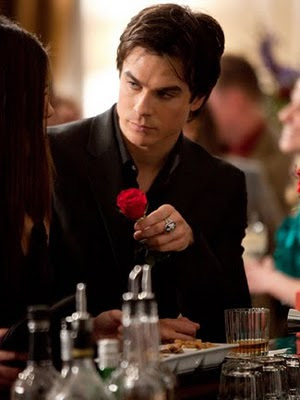 It occurred to me as I was watching the Vampire Diaries this week, that if you weeded out all the mediocre/crappy episodes and simply watched the few good ones, you really wouldn't miss that much. But then what to do with episodes like "Under Control"--mostly unimpressive, but with a couple of unexpected, and enjoyable, bits? My kingdom for some consistency on this show.

So, after reluctantly consuming human blood last time Stefan is now desperate to "detox." I don't know what's in the stuff versus animal blood but it has a similar effect on Stefan as meth has on some humans. Despite Damon's urging to use non-lethal sources of blood (i.e., blood banks), Stefan manages to stay strong. He even tells Elayna he's almost all better... after only a few days. But just when I was worrying that the show was wasting yet another opportunity for an interesting storyline, Stefan's resolve starts cracking. He shocks them both by vamping out in the middle of a hot and heavy session with Elayna. Later he gets drunk in an effort to take the edge off, which seems to only shorten his fuse. We know Stefan must really be on the edge because he's compelling people left and right. How... underwhelming. He then has the opportunity to unleash on a douche who's trying to pick a fight, but our hero manages to control himself and only hurts the guy's arm (and erases his memory). Yawn. After telling Elayna how much he's suffering and how he doesn't want her to see him this way, they get all sickeningly lovey dovey (like she's not secretly thinking of Damon). At home again, Stefan gives in to his brother's urging this time and drains a glass of human blood. I don't know--after watching a few episodes of Intervention, none of this seems particularly interesting or out-of-control. Then again, Stefan hasn't hit bottom yet. Let's see if the pretty boy vampire really has a dark side.

Which reminds me: clearly not all vampires lose control when they drink human blood. Damon lives on the stuff and seems calm even when he's killing people. Which means that he didn't kill anyone because he lost control--he killed because he wanted to/liked it. As a vampire fan, I have no problem with that. But maybe Elayna, Bonnie, and Saltzman (aka those who know what Damon has done and is capable of) should. Yet, other than initial bouts of annoyance, they're all fine with him. TV land is clearly populated by sociopaths and maladjusts. Or maybe he simply won them over with his charming personality.

Elayna spends the episode being about as useful as she ever is. She does attempt to bond with her brother, which backfires spectacularly when the topic of Vicky comes up and Jeremy--already suspicious about the circumstances of her death--realizes that Elayna is hiding something. Yeah--her diary, which he soon finds and reads. It's chock full of juicy bits about her vampire boyfriend, Vicky's demise at the hands of Damon and Stefan, and how Jeremy was compelled. Of course Elayna would be dumb enough to put all that on paper--it's not like these things ever fall into the wrong hands. But Jeremy keeps it to himself when he sees Elayna again, probably too preoccupied with planning her and Stefan's messy deaths.

By the way, Vicky's cause of death has been officially declared an OD, although the officials all secretly know better. But man is this tiny town efficient; Vicky's autopsy, funeral, and memorial service all take place within a few days (and they probably don't even have a coroner handy). You want value for your tax dollar, move to Mystic Falls. Yes, I am being sarcastic. No one expects realism on TV, but can we aim for believability?

Speaking of annoying, the writers managed to script the exact same conversation between Elayna and Damon twice this episode. The first time in her bedroom after she calls him over to talk about Stefan, and then again at the Founders Day kickoff party that night. Repetitive much? Wasn't I just complaining about the terrible editing on this show (see my review of Episode 17)?

Anyway, at the party Matt and his mom fall out again after he catches her sucking face with Vicky's ex, Ty. Classy lady. Drunk Matt's first instinct is to start wailing on Ty, but pretty soon Ty gets the upper hand and just about pulverizes Matt. When he's finally pulled off, Ty says he doesn't know what happened (anybody check what phase the moon was in?) Meanwhile Kelly is overcome with regret, tearfully promising to change--for reals this time! But Matt's done. He wants her out of the house--and his life--by morning. Meanwhile, Ty's dad the Mayor reacts to his son's apology in a way that would have made Alexis Carrington (you know--the bitchy one on Dynasty. Feel free to substitute the name of a character from a show made sometime this century) proud. In other words, he bitch slaps Ty and tells him that's the last time he embarrasses the family.

But all of that is inconsequential as the real story this episode centers around Damon and Elayna's uncle John(athon) Gilbert (David Anders, Heroes). John saunters into town without warning and without a plan for when he's going to leave again. It quickly becomes clear that no one likes the guy, including Sheriff Liz (who cleans up rather nicely, for the record). It's no surprise that John is part of the Town Council (aka the anti-vampire cabal), but his opposition to Jenna selling his brother's old office (the one that Pearl's intent on buying) is a little weird. And for someone who's been out of town since his brother's funeral, he seems to know a lot about what's been going on, including information he shares with the Council about missing people and blood bank thefts (all within a 75-mile radius of Mystic Falls). At the same meeting, Damon (who still hates the Founders Council but loves that they love him) takes note of the new guy, not least because he's a Gilbert.

What is surprising about Uncle John is that he knows who and what Damon is, as well as about the tomb of (now escaped) vampires. After informing Damon of this, he then taunts the vampire to tear his throat out. Cocky son of a bitch. Damon replies that he's not worth the effort and then walks away. So I really didn't expect Damon to suddenly run back and snap John's neck. After he dumps the body over the balcony, he goes back inside looking pretty pleased with himself. It's moments like these that make this show tolerable.

But there's more! Maybe we both should have seen it coming, but I admit I was about as stunned as Damon was when John walks back into the party as though nothing happened. Sadly, he's not a zombie. He does, however, have a magic ring just like Saltzman's. Cue dramatic music.

After filling Saltzman in on the details, he and Damon both confront John. It turns out John knows Saltzman... and Isobel (he's the one who sent her to Damon)... and Katherine. (No word on where the rings came from but they used to belong to Elayna's dad and John, but John gave his to Isobel--who gave it to Saltzman--and is now wearing the ring that belonged to his brother. Got all that?) Anyway, it seems John's a repository of useful information that he's not yet divulging. Oh yeah, and if anything should happen to him--like a vampire using his speed to get the ring and then permanently kill John--all that useful information is going straight to the Council. Damon is shaken, possibly for the first time (when Stefan was kidnapped by Frederick, Damon seemed more angry than worried). And I'm begging--begging--the writers and producers not to resolve this storyline this season. It's not a race--really.

Obviously this show has a lot of potential, but so far it's gone unfulfilled. Will they do any better with all the rich material (Uncle John, Stefan's addiction, Jeremy's revenge...) they now have? Sadly, I doubt it. Some people just don't know how to use what they've got.

Mythology: The longer a vampire avoids human blood, the more he craves it after he has it again.

Damon: (loudly after seeing Jeremy in the kitchen) No, Elena, I will not go to your bedroom with you!

Elayna: (re: Stefan) He's not you. Not even close.
Damon: Well, he doesn't want to be me. But that doesn't mean he isn't, deep down.

Damon: (after John returns from the dead) You've got to be kidding me.

The Vampire Diaries, Season 1 Episode 18 "Under Control." Written by Barbie Kligman and Andrew Chambliss. Directed by David Von Ancken. From The CW.
Posted by Aspasia B at 1:43 PM