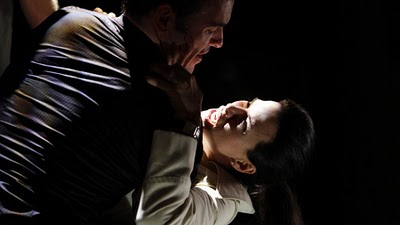 Brace yourselves, everyone: this episode contains actual vampire action (and werewolf action too)! It's like...it's a show about paranormal creatures or something. Crazy! Yes, that is sarcasm. One shouldn't have to go episodes between glimpses of fang on a show supposedly about vampires (ABC execs take note: that might have had something to do with its cancellation).

"Dog Eat Dog" starts off on a beautiful sunny day in the not-so-sunny gated community. Even though they're not homeowners, Nick and Sarah decide to go to the homeowners meeting anyway. And good thing they did! A fight breaks out between Ben McAllister (vampire) and Simon Ford (werewolf) over (sigh) the timing of Ford's sprinkler system. Only in the suburbs. (I know the show has set up an uneasy truce between perpetual enemies, but really? That's the best they could come up with?) Nick and Dylan break up the fight and Nick banishes Ford from the meeting.

At home later that night, we're reminded again of why Simon Ford is such a charming fellow as he's abusive to both wife, Joan, and son, Lukas. In anger he storms out of the house. The next day Sarah finds him, beaten into unconsciousness and lying on his front lawn as the sprinklers drench him. Ooh, irony.

Nick spends the episode investigating anyone and everyone. Ford's wife is convinced Ben McAllister is the culprit, but it turns out he has an alibi. After a whole lot of nothing, Nick finds out about the existence of the werewolves and their fragile truce with the vampires, the breaking of which would destroy the entire community--including the humans. He then conveniently figures out that Lukas is the one who beat up Ford. It turns out that junior caught senior drunk and off guard and, after enduring yet more (verbal) abuse, snapped and kicked dad's ass good. The only problem is that, having beaten his father in a fight, Lukas is automatically the new alpha. Once the other weres find out they'll challenge and kill him (since he's too weak to take on an adult were in a fair fight). Enter Coach Ross, the beta of the pack, who feels guilty for not having known about Ford's cruelty to his family (something the whole pack should have been involved in stopping). He decides to take responsibility for beating Ford and, thus, assume the role of pack alpha. Woo. Meanwhile, Simon regains consciousness and skips town (I guess there's no coming back from being ousted as alpha).

In other events, Peg gives Devon hell for growing "devil's weed" (actually Datura, which I also grow--oh noes!), claiming it's used for the "darkest of dark magic" (if only she knew about beastlyboy's eyeballs). Before dramatically exiting the shop, Peg orders Devon to get rid of the plants--or else. I wonder how she would have reacted if she'd known her daughter, Mia, was hiding in the back of the shop the whole time. Seems Mia's been visiting Devon to learn about "the cool stuff" that her mom won't tell her anything about. Next thing you know Mia and Devon will be consorting with the devil and ruining farmers' crops (they probably already are).

Andie and Brett continue to bond over their non-humanness. She seems to want to be with Charlie but is too afraid of hurting him, so I guess Brett will have to suffice (by the end of the episode it seems as though they're going to be 'experimenting' with Andie's powers--the kind of experiments that involve getting nekkid). Meanwhile Peg has told Mia (Andie's best friend) that if Andie doesn't take her medication her body will turn on her and she'll die. Of course, Andie's mother's unmedicated body was doing just fine until she lost control and "had" to be killed by her husband (definitely not the same as dying because your body turned on you). Dr. Peg seems like an overreacting busybody. Maybe she could use a little more consorting in her life.

And then there's the ongoing drama between Claire and Christian, source of the only interesting bits in the show. She comes upon him in her house playing with her daughter, Emily. But after Claire angrily confronts Christian and tells him to get out, he replies that if she doesn't come to his place at 8 that evening, he'll tell Dylan about their hunting escapades. She doesn't have much of a choice so she shows up. Christian is like a broken record, telling Claire that he should have been the one to turn her and that it's not too late for them. She disagrees, insisting that the bond between her and Dylan can never be broken. So Christian shows her how easily it can be broken (it seems that drinking her blood is all it takes, although there could be more to it that we didn't see). At home Dylan wakes in a panic and jumps out of bed (um, isn't it around 8 o'clock? Why is he fast asleep in bed?)

Of course Dylan realizes what's happened and, when Claire gets home and provides further details, decides to wreak some revenge on his good pal Christian. There's a really cool shot where Dylan's demanded Claire's phone: from a distance we see them, arms outstretched in the moonlight, hands barely touching as the phone is passed from one to the other. Why can't there be more scenes like this? Instead there are pointless scenes, like the next one, where Dylan texts Christian (I suspect it was a product placement, but I didn't care enough to pay attention). Dylan attacks Christian and ties him to a tree, where he proceeds to wash off Christian's protective layer of sunscreen. In disbelief Christian watches Dylan drive away. A moment later the sun comes up and Christian is badly burned (although I suspect not dead). When Dylan returns home it's clear that things will never be the same between him and Claire.

The episode ends with Nick getting a surprise visit from Simon Ford. Ford claims he's leaving forever but first he wants to give Nick a word of advice--don't trust the vampires (well, he would say that, wouldn't he?) Nick replies that he's not taking sides and he doesn't trust anyone. Ford says that's good because weres and vamps aren't meant to live side by side and sooner or later things will fall apart. Apparently Nick won't want to be anywhere near The Gates when that happens. Then Ford asks Nick to deliver a message to Lukas: he's proud of him. Then he's gone.

I don't get ABC. If they wanted to make a show about vampires and weres, succubi and witches, why focus so much on human drama? Isn't there enough of that out there already? The Gates had the foundation for what could have been a really cool show, but instead turned it into boring tales of suburbia. I mean, this isn't rocket science--did the producers really need to be told that a show about monsters should actually focus on the monsters? Apparently they did. How disappointing.

Appearance: Human, with sharp fangs that descend at will (rarely seen).

Weaknesses: Sunlight (have to wear a strong sunscreen to be able to withstand it).

Mythology: A bond exists between maker and made, but the bond can be erased by another vampire.

Simon Ford: Lay your hands on me again and that'll be the last thing you ever do.
Nick: You get the hell out of here or you're going to jail.

Christian: Claire, I love you.
Claire: I don't love you, Christian. I love Dylan.

Christian: You can live like a human, Dylan, but... you're not one. Neither is she.

The Gates, Season 1 Episode 8 "Dog Eat Dog." Written by Gabrielle Stanton. Directed by David Barrett. From ABC.
Posted by Aspasia B at 1:47 PM