Dead and Gone by Charlaine Harris 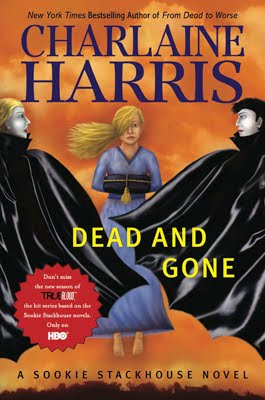 I think Charlaine Harris must have started taking cues from True Blood because Dead and Gone is dark. Disturbingly so (not complaining). But this has got to be the first time a show is based on a series of books only to have the author subsequently inspired by the show when writing said books. I'm not even sure where that falls on the life imitating art scale.

There seems to be slightly less than usual going on in this instalment of the Sookie Stackhouse saga, but in a good way. For once the story doesn't fly off in a million directions (not that there isn't plenty going on), and little time is wasted on the superficial/mundane. There's even character growth when it comes to Sookie! Shiny gold star to the author!

Dead and Gone starts off on a surprisingly light note, with an amusing bit about the vampire version of What Not to Wear (a show I now realize I'd love to see). But things quickly get serious with the second big supernatural revelation: weres and shifters finally announce their existence to the world. Of course there are mixed results. While people in Bon Temps seem to take it in stride (except for Arlene, who's gone off the rails in terms of hating anything not completely conventionally human ever since hooking up with a Fellowship of the Sun idiot), Sam's mom is shot by his step-dad. But no one could have predicted the horrific crime that ensues (sensitive readers skip this part): pregnant were-panther Crystal is found crucified in Merlotte's parking lot. Don't say I didn't warn you.

You'd think between running Merlotte's for Sam while he's off in Texas with his family, fending off the FBI (interested in using her and Barry for their own purposes), and trying to telepathically seek out Crystal's killer, Sookie would have enough on her hands. But that wouldn't be as much fun, would it? She also manages to unknowingly pledge herself to Eric (they're now the vampire version of married). This was a pretty awkward and lame part of the book, but at least things are progressing between her and Eric (and it also keeps her safe from becoming the unwilling property of the new King of Louisiana).

On top of all this, Sookie discovers she's in the middle of a fae war and is being targeted by the hateful Breandan, leader of the water fairy faction, as the beloved human great-granddaughter of Niall, Prince of the air tribe. After being attacked in her own garden by one fairy and stalked by another, Sookie decides to call in the supernatural cavalry. Using her status as friend of the Shreveport pack and taking advantage of the formal protection offered by the vampire King, she asks for their help. And what do they send her? One werewolf guard (Dawson) and... Bubba. I liked Bubba for about five minutes but now he's just getting increasingly annoying. I mentioned in the past that it's stupid to invent reasons to include him in the story, and this is the stupidest instance of all. Not only does it not make sense to have him sent to guard Sookie against an army of fairies, but Harris clearly didn't know what to do with him once he gets there. His presence sort of just fades away, with a vague mention or two of him after his big arrival. Terrible. Dawson's role isn't much better. It's no surprise Sookie ends up kidnapped by a particularly nasty pair of fairies.

What is surprising is that she's tortured by said fairies. Actual brutal torture (although, thankfully, details are minimal--but you definitely get the idea). Even Sookie says she's never going to be the same again. She is eventually saved, and more or less healed with Eric's blood, and the fae war is settled. But not without the deaths of a couple of characters I liked, and the permanent retreat of Niall and the other fae back into their own realm. It's disappointing that Niall was just introduced and he's already being shelved, although I have the feeling this isn't really the last we'll see of the fae.

I'm curious to see how things go from here: whether Sookie will really be a changed character; how her relationships with Eric, Bill, and Sam will evolve; what the consequences will be from weres and shifters being out in the world; how the ongoing threat of the Fellowship of the Sun will play out. And whether someone will finally stake Bubba already. There are many possible paths: which one will Harris take?

Appearance: Pale humans with long fangs that extend or retract at will. Vampires glow, although apparently only Sookie can see it. Their eyes also glow different colours, depending on their emotional state.

Strengths: Super strength, speed. Ability to track humans who have consumed their blood. Ability to form bonds with humans. Ability to "glamour" (hypnotize) humans. Some vampires can fly.

Weaknesses: Sunlight, silver (they can be poisoned to death by silver). They are at risk of being drained, as their blood is a drug/aphrodisiac to humans.

Mythology: Vampire society is hierarchical and highly political, with Sheriffs, Kings, and Queens presiding over various territories. There are complex rules governing vampire loyalties, and strict adherence to those loyalties (for example, a lesser vampire who no longer wishes to serve a higher-ranking one needs to formally request to be released. They may or may not be granted their freedom). There are also strict rules regarding interaction with humans.

"You're a Christian," he [Dillon, Sookie's fairy great uncle] said, as if he'd discovered I was a hermaphrodite or a fruitarian.

"I will make you a rug on my floor." Bill said [to Quinn], and his voice was colder and smoother than ever, like ice on glass.

Dead and Gone by Charlaine Harris. From Penguin (Ace Books).
Posted by Aspasia B at 12:08 AM