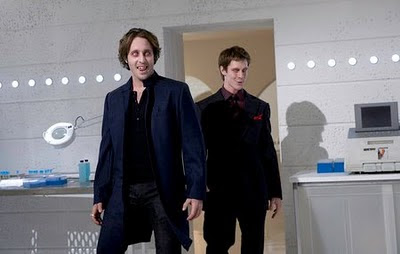 Woo hoo--Mick is human and Josh is gone--the stage is finally set for romance between Mick and Beth! Only, not so much. Prepare to be disappointed.

Despite it being only temporary, Mick is thoroughly enjoying being human again (see last episode), sleeping in a real bed instead of an industrial freezer, spending time in the sun without getting sick, and eating all his favourite foods. He even gets to enjoy a sunny picnic at the beach with Beth, who informs him that she's had feelings for him for a while. Mick still seems reluctant to do anything about it, though.

While Mick ponders the consequences of mortal-vampire relationships, Mo (Beth's boss) puts a damper on Beth's night by calling her into work (a hot story is about to break). But Beth's night gets worse when she finds Mo dead from a gunshot wound to the head and Mo's ever-present computer missing. She and Mick discover that Mo was in the presence of a vampire before she died, although she wasn't drained of blood. The mystery gets even more complicated when they find Mo's USB drive and discover she was working on three stories, one of which involved Josef and a charity scam. In order to find Mo's killer they're going to have to investigate the key players in all three stories, starting with Josef.

I was thrilled to see the lovely Ksenia Solo (Kenzi on Lost Girl) take on a role as a politician's daughter in one of the stories being investigated. We also get to meet the new DA, Ben Talbot (Eric Winter, The Mentalist), who starts out as kind of an ass but ends up being okay. I just hope he's not being set up as competition for Beth's affections. More likely that was the long-term plan before the show was cancelled.

The three mysteries are actually pretty interesting, particularly how they intertwine and relate to Mo's murder. Unfortunately, things really fall apart at the end with an unbelievable and clumsy conclusion. It turns out the murderer is a vampire, who--for no good reason--proceeds to vamp out in a particularly non-subtle way, kidnaps Beth and the new DA, and leaves Mick for dead. There might be an argument for kidnapping Beth, but the DA? Why not just kill the guy? And why wouldn't he check to make sure Mick was dead? How did Mick not bleed to death as he lay unconscious for two hours with a huge chunk of glass embedded in his thigh? What was the murderer doing for the hours it took for Mick to wake up, take care of his wounds, go back to his place to get weapons, and argue with Josef (including convincing Josef to turn him again since he obviously can't fight a vampire as a mortal)? Why wouldn't Josef do his best friend Mick a favour and fight the murderer on his behalf (something that would be a piece of cake for an ancient vampire like Josef) rather than turn Mick (wasting more time) and robbing him of his hard-won and much-loved humanity? Why would the killer bother blindfolding the DA (so that he doesn't end up seeing any of the vamp action that ensues when Mick and Josef eventually show up, of course). And why did it take all this for Mick to finally see the disadvantages of being human--what, he didn't already know that humans are weaker than vampires? Too many questions and no satisfying answers.

I did, however, immensely enjoy the scene where Josef turns Mick. Strange that with all the vampire shows and movies to choose from, we so rarely get to see any actual biting (often we see the lunge or the blood or the aftermath, but not the bite itself). I happen to enjoy it when vampires act like vampires and a good bite is a big part of the appeal (drinking blood out of a glass, while probably a necessity for the good guys, is just too... domesticated).

But speaking of unsatisfying, the end of the episode brings us full circle with Mick and Beth sharing another picnic, only this one is on a rooftop at night. The conversation comes around to their G-rated relationship. Mick claims he doesn't want Beth to get hurt but she turns it back on him, pointing out that maybe he's the one who doesn't want to get hurt. She calls him on using vampirism as an excuse for keeping them apart. As she stalks away he grabs her and finally kisses her. It's a good kiss too, and it looks like things are at last moving forward. Except that when it ends he tells her he still needs time to figure things out. Huh? I'm so not a fan of people (or characters) who over-think emotions (seriously, who believes you can weigh the pros and cons of love? If you feel the need to do that you're not in love). The show has officially gone from tantalizingly stretching out the tension between Mick and Beth to coming up with lame excuses to keep them apart. Fail. There are three episodes left and I'm starting to worry that Mick and Beth will never get together. So much for romance.

Appearance: Pale humans until the vampire emerges, then ghostly white eyes with reddish bruised-looking circles around them and long, elegant fangs. Prone to growling and eerie screeches when fighting.

Mythology: Cold is soothing to vampires. Vampires can eat food but it is flavourless to them. Animals are instinctively frightened of vampires. The Cleaner takes care of scenes of vampire carnage in order to keep their existence secret from humans. A blood exchange is needed to turn a human.

Mick: I... am in love with her.
Josef: Yeah. Yeah you are. Now go do something about it before it's too late.

Mick: People always hide things in the last place they think anyone else is going to look.
Beth: Tampons!
Mick: Excuse me?
Beth: I always hide my nice jewellery in a box of tampons.
Mick: Yeah, okay. I'll admit that's the last place I would look.

Josef: [being questioned about Mo's death] Well, was her body found in the La Brea tar pits?
Beth: No.
Josef: That was the only person I killed this week.

Moonlight, Season 1 Episode 13 "Fated to Pretend." Written by Gabrielle Stanton and Harry Werksman. Directed by David Barrett. From CBS/The CW.
Posted by Aspasia B at 2:04 PM