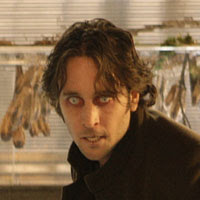 I hate it when shows screw up on continuity. I'm not talking about when a cup is half full in one scene and completely full in the next, or when a character's hair is slightly lighter from one moment to the next. I mean major inconsistencies in storyline. Like when Spike called Angel his sire even though, later on, Drusilla was revealed to be his sire. I understand that the writers/producers might want to change something in order to improve the overall story (believe me, I know--I'm a writer: editing is never done). But when you make changes to the mythology of the story, it throws the whole series out of alignment. That's what Moonlight does this episode. I'm less than impressed.

A good portion of "The Mortal Cure" deals with the aftermath of Josh's death. Not only Beth's feelings about Josh and the loss of him but the way she views Mick, as well. Things get even more complicated when Beth finds out Josh was going to propose to her and still more complicated when Coraline re-enters the picture.

Mick, meanwhile, has his hands full. After being confronted by an ancient vampire with a jet black eye looking for Coraline, Mick decides to find out who the vampire is, where Coraline is, and what this all has to do with the supposed cure for vampirism.

Mick learns that the ancient vampire, Lance (Jason Butler Harner, Fringe), is ridiculously rich, lives by his own rules, and "never" leaves Europe. He also discovers that Coraline escaped the hospital with help from her best friend and fellow vamp, Cynthia Davis (Meredith Monroe, Criminal Minds, Vampires: The Turning). After a little more investigation Mick finds out that Cynthia recently earned a Masters and a PhD in biochemistry, that she commutes between LA and Paris every couple of weeks, and that she's been importing agricultural products from France. What does it all mean?

Mick heads to the warehouse where the agricultural products are being delivered and discovers a lab inside. A vampire scientist is performing experiments, overseen by Coraline. And then Lance shows up. Mick takes a moment to save Coraline from Lance's clutches only to watch her run off as Lance proves to be unlike any other vampire Mick has ever encountered (rather than turn to ash when it catches on fire, Lance's hand quickly heals). After a fight in which Mick gets his ass kicked, Lance takes off (it's unclear why he doesn't kill Mick). Once Lance is gone, Mick calls the Cleaner, now played by a new (but not improved) actress. Unfortunately, there's a lot of mediocre acting this episode.

The next scene brings us a minor bit of discontinuity (not the really annoying one, but still worth mentioning) where Beth is supposed to be meeting someone at 2 pm and shows up when it's completely dark out. Man, the sun sets early in LA. Afterward, she goes to see Mick and just when it seems Beth is about to say something significant, Coraline shows up, latching herself onto Mick like a tick on its favourite dog. No surprise when Beth leaves without saying another word.

Coraline informs Mick that she needs to leave town and that she wants him to go with her. But of course she can't go anywhere before getting all expository about Lance and the cure. It seems the cure is itself mortal; merely a temporarily effective organic compound developed from local plants by an 18th century noble French family. Lance is part of this noble family, one of seven brothers--all vampires--sired by the same (also noble) vampire. In fact, King Louis XVI himself was a vampire. Oh yeah--and the French Revolution? A big fat excuse to hunt vampires. The compound was designed to mask the characteristics of vampires long enough to prevent a trip to the guillotine. Coraline stole the compound from Lance and now he wants it back.

She tells Mick that she's been trying to find a way to make the compound's effects permanent. It turns out she wants to embrace life again, or some such nonsense. She makes a gag-inducing comment about love not being able to exist without mortality and offers to give Mick a bit of his life back by using some of the compound on him. He's thrilled, of course, and the effect starts taking hold right away. At this point she claims she really has to go. Of course, as she and Mick are walking outside, Lance and his henchman show up. When Lance calls Coraline 'sister', Mick suddenly realizes that there weren't seven brothers in the noble vampire family--there were six brothers and a sister! And Coraline was the sister!

But wait--wasn't Coraline supposed to have been a 17th century courtesan? Wasn't that the whole point of the fleur-de-lys brand/tattoo on her shoulder, mentioned way back (a whole three episodes ago) in "Fleur de Lys"? Not only was it mentioned, but we got a flashback scene of Coraline being branded. So how does she suddenly go from being a 17th-century whore to being an 18th-century noble? And where did the brand/tattoo come from? She couldn't have got it after being turned (it would have healed, like any other wound) and I'm pretty sure nobles didn't mark their daughters. See why this annoys me? It's the worst sort of writing/storytelling to change the nature of a character merely to suit your changing needs. How hard would it have been to work around the show's established mythos? Next thing you know, Beth will have been a teenager when Coraline kidnapped her and Mick was a Vietnam war vet before being turned.

Anyway, being no match for Lance as a vampire, let alone as a temporary mortal, it's not long before Mick's life is in serious danger. At this point Coraline finally steps in, offering to go with Lance and give back the compound as long as Lance leaves Mick alone. Apparently Coraline's in trouble for more than just stealing the compound--she's also pissed off the rest of her family for turning Mick without his consent and without their permission. Lance stakes Coraline and then takes off with her to face the consequences for her actions.

Mick doesn't seem overly concerned about Coraline's fate. Instead he limps home, collects a vial of his own blood for future analysis, and spends the night gorging on food and enjoying the opportunity to sleep like a human (i.e., not in a freezer). The next day, plenty beat up from the fight the night before, he heads to Josh's funeral, where he and Beth talk about how great it is to be mortal and how some things (spending their lives with Coraline and Josh, respectively) were never meant to be. Then, as the service begins, Mick and Beth stand on opposite sides of the casket, staring at each other. It might have been nice if they'd at least waited until Josh was in the ground, but clearly things have changed and they're on a whole new playing field.

I really hope this is the last we see of Coraline. There were hints that there might be long-term plans for her and Lance on the show, but hopefully the writers didn't have a chance to act on those plans before the untimely demise of the series. Coraline was a much better character as a dark presence in Mick and Beth's pasts. Once she showed up again she lost her power (not to mention polluting the show with her bad acting and annoying presence). The change to her background just adds to the reasons to get rid of her permanently. There are only a few episodes of Moonlight left; I hope the show gets good again now. It would be a shame to remember it for episodes like this one.

Mythology: As vampires age they give off an increasingly stronger smell of decay. They also enjoy the cold, sleeping in freezers and taking ice baths.

Scientist: Let's be rational about this.
Lance responds by decapitating him.

Josef: [to Mick] It's just like Coraline to fall in quicksand and bring you down with her.

Coraline: I think Beth is starting to like me. She didn't stab me this time.

Moonlight, Season 1 Episode 12 "The Mortal Cure." Written by Chip Johannessen. Directed by Eric Laneuville. From CBS/The CW.
Posted by Aspasia B at 12:06 AM