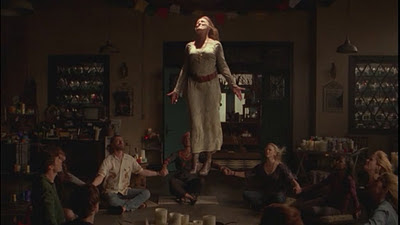 It's weird: necromancer Antonia should be a more sympathetic character. After all, she was imprisoned, tortured, raped and finally burned at the stake by vampires. Her desire for vengeance is justified. And let's face it--her powers are pretty damn awesome. So why is she not only unlikable but also being portrayed as the bad guy? I guess her insistence on killing all vampires everywhere has something to do with it (nobody likes a fanatic). But even the "good" vampires on True Blood have done some pretty horrible things. This is all getting too confusing. Do I root for the vampires or for the wronged witch? Can't we all just get along?

When we last saw Antonia she had made herself comfortable inside Marnie's body (the possession thing is also a little too creepy). She had then enslaved vampire Sheriff Luis. "Cold Grey Light of Dawn" starts off with Antonia using Luis to execute the "treasonous" Katie (one of Bill's security guards who infiltrated Marnie's coven). Too bad--I kind of liked Katie. Luis is then given orders to give his King a message.

When Luis goes to see Bill he informs him that Antonia is back. Then he shoots Bill before trying to stake him. Of course Bill gets the upper hand. When he demands to know what Antonia wants, Luis says one word--"Resurrection"--before staking himself.

From there we go to Pam--still decomposing alive--as she attacks Tara and her girlfriend. Just as she's about to choke the life out of Tara she notices a group of locals watching and taking photos. Reluctantly Pam puts Tara down but promises to come back and shred her like confetti. Tara's shaken, so much so that she sends her girlfriend away claiming she doesn't want her to end up dead as well.

Depressed, alone, and granted a temporary reprieve Tara spends the night getting drunk and wandering along the side of the road. Out of nowhere Antonia shows up and gives a rousing speech about how alike she and Tara are, how they've both been used by vampires and how together they can avenge their torment and exact retribution. Of course Tara agrees to help (she has to be the most easily swayed/manipulated character on this show) and they set about recruiting more people to their cause.

Jason shows up doing some truly impressive pushups in an effort to get his mind off Jessica. Too bad his plan doesn't work out. Especially when Hoyt shows up and, after a perfunctory show of concern for Jason ("You were raped" "It's okay I'm over it" WTF?) he starts going on about how Jessica is slipping away from him and it'll kill him if he loses her.

Speaking of Jessica, she's busy being filled in by Bill on the Antonia situation. Their relationship has evolved into a rather sweet father-daughter bond (reminds me of Buffy and Giles). I want to see more of the two of them. Anyway, Bill's convinced that Antonia will reprise her last stand and lure the vampires out into the daylight so he comes up with a plan to send away as many of the Louisiana vamps as he can and to have everyone else bound with silver during the day. It's not going to be fun but it'll keep them alive.

While all this has been going on Sookie and Eric continue to have sex--in the glade, at home, the entire way from the glade to home. Don't these two get tired? They finally take a break and the pillow talk turns to whether Sookie will still want Eric if he gets his memories back. Way to ruin the moment. She's not sure that she will still want him but she wants to. I guess that's something.

No sooner do they get some clothes on than Bill shows up. They thank him for allowing their happy reunion (he looks completely miserable) and then he tells them about what's been going on. He offers Eric a secure cell at his place but Eric isn't leaving Sookie's. Bill hands them a rather large pile of silver chains and heads back home to start getting ready. He makes sure his mansion is light proof and then he silvers Jessica and himself. The silvering process looks pretty horrific, worse than we've seen it before. Bill ends up taking pity on Jess and holds off on silvering her neck.

Since the pain from the silver is so intense the vampires can't sleep and that seems to put them in a confessing mood. Jessica tells Bill that she's not sure she can love Hoyt anymore. Meanwhile Eric tells Sookie that he doesn't want his memories back--he's perfectly happy as he is with her.

Now that she's taking a break from trying to kill Tara, Pam has decided to see the doctor about a cure of some sort. Unfortunately the doctor can only clear the surface rot and keep Pam pretty--she'll still be internally decomposing. Even that temporary fix involves ripping off the external layers of skin (shudder) and taking six injections four times a day. You've got to wonder if it's really worth it. Lucky Ginger gets the task of injecting Pam, as well as covering her with silver chain mail and keeping watch over her coffin. It's so glamorous hanging out with the vampires of True Blood!

After an inspirational talk Antonia gets down to business with her fellow witches and vampire haters. As they cast the spell the vampires all start going crazy, begging to be set free to see the sun. It turns out one of Maxine's neighbours is a vamp but didn't get the memo as she bursts into flame on the front lawn.

In other happenings, after vomiting and passing out Tommy is feeling better (the doctor blames food poisoning). Once he's sure Tommy's all right Sam gives Luna a call and is shocked when she's less than friendly. He ends up going to see her in person and when she realizes he doesn't remember sleeping with her it ends up dawning on both of them that Tommy is a skinwalker. They're both sickened at the thought. Later Tommy wakes up to find Sam staring at him. Sam is enraged, not only at what Tommy did but at what he might do (like kill Sam and take his place). In his anger he starts choking Tommy but eventually backs off. Then he tells Tommy he has 2 minutes to leave forever and, just in case Tommy isn't devastated enough, Sam tells him he wishes he could forget everything about him.

Meanwhile Jesus and Lafayette decide that even the relative safety from vampires isn't enough to keep them at granddad"s (the fact that he decided to prove that Lafayette is a medium by nearly killing Jesus might have had something to do with that). But why they went back to Bon Temps isn't too clear. Lafayette goes back to work at Merlotte's like nothing's happened, which is also strange. But I guess it gives an opportunity for him to see the lady ghost hanging around Arlene's baby.

As for Debbie and Alcide, after being inducted into the Shreveport wolf pack Debbie's jealousy toward Sookie starts becoming more apparent. Alcide assures her she's the only girl for him and although she seems mollified I have a feeling the jealousy issue will be rearing its ugly head again before long.

The episode ends with Jason stopping by to see Sookie. Hearing Eric's screams she quickly explains to him what's happening. As she returns to Eric Jason starts running for Bill's. Jessica has managed to break her chains and escape from the cell. For a second it looks like Bill will stop her: he commands her as his maker to...release him. She ignores him, however, and crawls upstairs. As Jason runs toward the house he gets intercepted by one of Bill's guards. As he grapples with the guard Jess finally reaches the doors and throws them open as sun streams in.

I will not be happy if Jessica dies. She's definitely one of my favourite characters. I hope the vampires have a good plan for putting Antonia out of commission; otherwise, the silvering is going to get old fast. And despite my questions at the beginning of this post, when it comes right down to it, I always root for the vampires.

Appearance: Pale humans with red-rimmed eyes and long, snakelike fangs that extend or retract at will (and also when the vampire is excited). A dead vampire is a mass of stringy, bloody bits.

Mythology: Vampire society is highly hierarchical with Kings and Queens ruling over Sheriffs and lesser vampires, and all ruled by the mysterious Authority. Vampire blood (V) is an addictive and illegal drug. If a maker orders his child to do something the child can resist but with great difficulty.

Redneck 1: What the hell's the matter with her face?
Redneck 2: Show us your face!
Redneck 1: Are you sure she ain't a zombie?
Redneck 2: Oh crap, now there's zombies?
Pam: I. AM NOT. A ZOMBIE!
Redneck: That's exactly what a zombie would say!

Bill: Since when has any fanatic been held back by the improbability of their righteous mission?

Jessica: When we survive the day I am going to eat that fucking witch, starting with her face.

Antonia: Vampires are not immortal. They are only harder to kill.