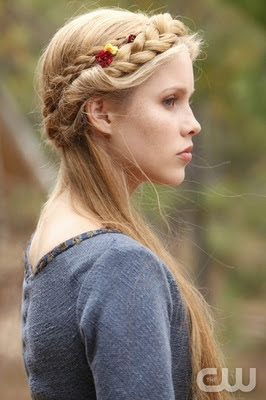 This just might be my most-hated episode of The Vampire Diaries. I don't know what they were thinking when they put this hot mess together. Here's some free advice for the writers: Vikings don't have English accents and they do not have Biblical names. Furthermore you're telling us there's no archeological evidence for an entire Viking village in the US from only 1000 years ago? Congratulations on coming up with one of the stupidest story premises I've seen in a long time.

So "Ordinary People" starts off with Alaric, Elena and Damon in the caves under the Lockwood estate. Alaric shows Elena the glyphs and explains that they tell a story before he points out that the Viking runes (which he can apparently read) include the names Rebekah, Elijah, Michael and Niklaus. See, I'd have no problem if the characters ended up changing their names over time but the fact that their names appear in runes means those are their original names and how can you expect me to believe any of this stuff if you can't get something as simple as names right? You show me evidence of a Viking named Rebekah or Elijah and I will give you a million dollars. Seriously. But Alaric, Elena and Damon have other things on their minds. Alaric's managed to interpret that werewolves lived in Mystic Falls long before there was such a thing as Mystic Falls, while Damon figured out that Michael is the Original dad.

We're also treated to a series of flashbacks, starting with one of Rebekah and Klaus in the cave as she carves the runes. Why? Who knows? I guess there wasn't much to do back then. We also find out that they and their siblings are all afraid of their father. We get a sense of why when we later see the miserable bastard chewing out Klaus for nothing.

Back in the present Alaric takes photos of all the glyphs so he can study them at home. As they're discussing their next move Elena spars with Damon (let's just say she's no Buffy). Elena finally decides they need to talk to Rebekah to find out more about Michael and the Originals. And after a few threats Rebekah is more than willing.

Rebekah tells a truly ridiculous tale. Apparently her parents, back in the land of the Vikings, lost a child to plague and decided they needed to take their family someplace safe. That safe place was the new world (already populated by werewolves) where everyone was healthy (they apparently travelled there with the help of a witch.) First of all, you don't get plagues in sparsely populated areas. I don't think plague was a real issue for the Vikings. Second of all losing children was commonplace back then. Yes it was sad but people were used to it. Running away from the dangers of life wouldn't occur to anyone. Thirdly I can't believe a Viking would run away from anything. But Rebekah goes on. She adds that her family lived in peace with the weres, retreating once a month to the caves while the wolves did their thing. That was, until the night Klaus and youngest brother Henrik decided to go out and watch and *gasp shock* Henrik ended up dead. Well, that was it--no more friendly relations with the weres. Because, you know, it was their fault the kid got himself killed. And the family couldn't go anywhere else because Michael was too proud to run (except from disease, apparently). No, Michael decided they had to use witchcraft to make themselves meaner and stronger than the weres so they could kick their collective ass. Really? When their witch refused to do something so against nature, mom Esther (another fine Viking name), also a witch, stepped up.

Although it goes against everything witches stand for Esther agreed to work a spell to change her family into the first vampires. She didn't include herself in the spell, however, because you can't be a witch and a vampire. Of course now that they've said that unequivocally you know a vampire witch is going to show up at some point. By the way, Esther was also the Original Witch. Once the spell was out of the way Michael fed his kids blood and killed them. Then when they woke up he brought them fresh blood in the form of a girl to complete the transformation. Of course there were consequences, being the weaknesses we all know about (see Fang Files).

But wait, the worst was yet to come. When Klaus killed his first human it triggered his werewolf gene. Of course that made him Michael's greatest shame. So Esther put the curse on him and turned her back on him. But Michael still couldn't deal. He slaughtered half the village and then killed Esther in front of Klaus. From there the family was scattered, although Klaus, Rebekah and Elijah stayed long enough to bury their mom and vow to always stick together.

Elsewhere Damon has decided to amuse himself by releasing Stefan from the cell. He's not a big fan of the Lexi rehab plan so he's going to try another way. It's not a particularly subtle way as they head to some random bar where they indulge in whiskey, blood, and dancing on tables. Damon claims he wants Stefan to remember what freedom feels like so he'll get mad and fight back against Klaus. Before they can really explore that idea Michael shows up. How he found them considering they don't even really know where they are, who knows? He starts questioning Stefan about where Klaus is but because Stefan is compelled he can't give anything away. So Michael decides to motivate him by shoving his hand into Damon's chest and threatening to rip out his heart (by the way, this counts as impaling if you're playing my drinking game!) At first Stefan still insists he can't tell Michael anything but just when Michael is about to perform amateur heart surgery Stefan suddenly admits he can lure Klaus back to Mystic Falls. Good enough--as soon as Klaus shows up, Michael will kill him. And if Stefan can't get Klaus back then Michael will kill him.

While Elena is busy with Rebekah and Damon is busy with Stefan, Alaric has Bonnie bring him the necklace that wouldn't die. With the necklace he can confirm that one of the recurring glyphs is the symbol for witch. Once Elena is done with Rebekah she joins Alaric and helps fill in the blanks in the glyphs. And--OMG--she realizes that it wasn't Michael who killed Esther--it was Klaus!!!!! When she runs back to Rebekah with photos and a breathless revelation the vampire first gets angry and then starts crying. Because somehow it never occurred to any of them that Klaus might have been lying about Michael killing their mom. I can sympathize with Rebekah, though--this episode made me want to cry too.

There is a satisfying moment, though, when Stefan mouths off to Damon and Damon handily kicks Stefan's ass. As Gordon Ramsay would say, well thank fuck for that. The episode ends with Damon waiting on Elena's bed as she's about to settle down for the night. There's an amusing moment as she's pulling on the blanket, trying to budge it so she can get under it while Damon ignores her and keeps talking. But then she slides in anyway, tells him they might have Rebekah on their side, and mentions that she thinks Damon will be the one to save Stefan from himself--not because Stefan loves Elena but because he loves Damon. Aww. Then she falls asleep under Damon's watchful eye (you know, when the Angel[us] would watch Buffy as she slept it was considered creepy. Now it's the romantic thing to do...)

I really can't stand shows that make it up as they go along. Yeah maybe that helps with the element of surprise but mostly it encourages the element of idiocy. Come up with a long-term story outline, makes sure it all makes sense, execute. How hard it that? At least this show still has Damon. He's the only thing that keeps me coming back.

Mythology: Originally there was no way to permanently kill an Original (especially Klaus) but now it seems there might be a way (involving a stake made from the white oak tree). Vampires can turn off their emotions/humanity at will. In order to be turned a human needs to die with vampire blood in their system; to complete the transformation they need to feed from a human.

Damon: [re: the cave glyphs] Yeah, it's the Lockwood Diaries, Pictionary style.

Rebekah: [to Elena] If you wake Michael we are all doomed.

Elena: [re: Stefan] How does he look?
Damon: Pasty and pouty.

Stefan: Damon, you are worse than Elena. Getting me drunk, brotherly bonding. What, you think I'll break down and you can pull me back from the edge, is that it?
Damon: I happen to like the edge, Stefan. Your problem is your inability to resist falling over it. You're all or nothing, man. You can't just be. Although, who am I to judge?

Rebekah: A witch is nature's servant. A vampire is an abomination of nature.

The Vampire Diaries, Season 3 Episode 8 "Ordinary People." Written by Caroline Dries and Julie Plec (based on a story by Nick Wauters). Directed by J. Miller Tobin. From The CW.
Posted by Aspasia B at 6:47 PM