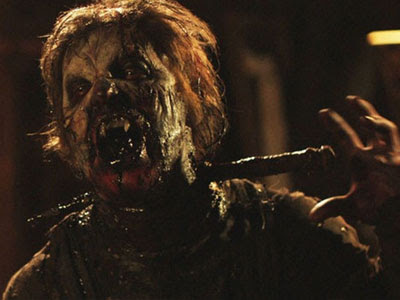 I'm definitely a fan of the VILF genre of vampires but I have to say it's nice to see a movie where the only contact you'd want with the monsters is when your stake contacts their undead hearts. Giving the zombie treatment to vamps is also a step in the right direction of reminding us why vampires are still scary.

Stake Land won the Midnight Madness Audience Award at TIFF 2010 and will be released in theatres 22 April. Can't wait.
Posted by Aspasia B at 5:55 PM No comments: 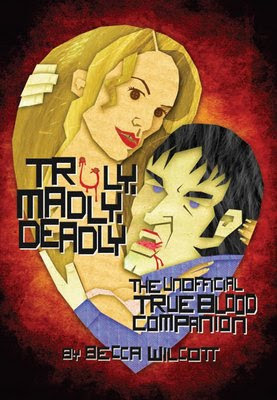 Being in love with True Blood and having plowed through the Sookie Stackhouse books, I figured it only made sense for me to follow those reviews with Becca Wilcott's Truly, Madly, Deadly: The Unofficial True Blood Companion. But when I started reading TMD I became worried I would hate it as it seemed bent on deconstructing the idea of vampires. I'm not sure when but somewhere between university and attaining so-called adulthood I grew to despise all things over-analytical, nit-picky, and pretentiously intellectual. I like my vampires visceral and enigmatic, thank you very much, not as an exercise in intellectual dissection. For a moment it seemed as though TMD was heading into murky territory. But I'm happy to say that TMD is smart, thoughtful, humorous--an overall enjoyable read with none of the cringe-inducing doucheyness I was worried about. And I'm not just saying that because I'm mentioned in the book (ahem, check out page 165).

The book is packed full of information, some of which was unexpected, which made for quite a few pleasant surprises and thought-provoking moments. There are bios and interviews featuring various fans, writers, bloggers, and lifestyle vampires, as well as the show's actors, Alan Ball, and Charlaine Harris herself. Pam fans (represent!) score with an exclusive interview with Kristin Bauer van Straten (back when she was still Kristin Bauer). Possibly less exciting is the exclusive interview with Patricia Bethune (Jane Bodehouse).

Chapters include "The Pleasure and Pain of Alternative Lifestyles" and a fascinating exploration of HBO's viral marketing campaign for True Blood's premiere (I wish I'd started Blood Lines back then). There's plenty on the pop culture politics of the show, especially the LGBT connection. I was also thrilled to see an entire chapter ("Being Bad Never Felt So Good") devoted to the opening credits, including the producers (Digital Kitchen) and songwriter Jace Everett. I'm a huge fan of the opening sequence (as anyone who's read my TB reviews will know) and "Bad Things" and it's good to know I'm not alone in my appreciation.

A major portion of the book is devoted to episode synopses (seasons one and two only), along with quotes and interesting facts. While there are some compelling insights and opinions expressed here, I kept being distracted by the silly names of the sub-categories (e.g., "Relationship Crypt Falls" and "Paging Dr. Creepy"). Vampires might value puns but, as Sookie demonstrated, humans not so much. Also annoying to me were the (thankfully few) bits where the author speaks directly to (or as) the characters. TMD's weakest parts are when it, like a comedian who feels the need to always be "on," tries too hard.

The other weak part is the chapter on the TB Twitter roleplayers. I think unless you're part of the roleplaying (which I'm not nor have any desire to be) it's less than fascinating stuff. Unfortunately the author spends a fair amount of time on the Twitterers, including quotes by and interviews with the players in character. I found the quotes awful and the interviews simply unreadable. Here's a handy tip, guys: we already know what the characters sound like--do not torture us by writing in dialect. There's nothing more annoying than trying to read phonetic spelling. Seriously.

Luckily TMD doesn't stray from form too long and returns to the far-more enjoyable interviews with writers and fans. I especially enjoyed the "Interview with a Sympathizer" highlights gleaned from the author's website. It's always good to see what other people have to say about a topic so dear to my heart, even when I strongly disagree with their viewpoints and have to suppress the urge to yell at the book.

I would be remiss if I didn't also mention the numerous photos, both black and white and glossy colour, of the cast, fans, and sets. The author did not skimp on tantalizing details when she put this book together.

I think TMD qualifies as essential reading for any True Blood, Alan Ball, or Charlaine Harris fan. When I finally reached the end of the book I was sorry that there wasn't any more to delve into. I hope Becca Wilcott has future editions planned (seasons 3 and 4?); I'll be right there to get my copy.

I'd also like to take a second to thank Becca sincerely for including me and Blood Lines in TMD. My labour of love suddenly seems so much more worth the effort. Cheers!

Becca Wilcott: "You want an ideal coming-of-age metaphor, stick to werewolves and witches. But leave me my deepest, darkest vampires. To be precise, that which is not seen, not surface, and not freakin' sparkling."

Truly, Madly, Deadly: The Unofficial True Blood Companion by Becca Wilcott. From ECW Press.
Posted by Aspasia B at 12:28 PM No comments: 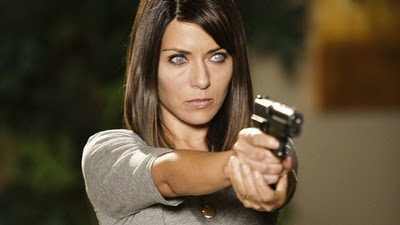 I wish I had more to say about "Surfacing" but it's pretty standard Gates/soap opera fare: melodrama, scheming women, families being torn asunder. They even managed to include a possession this time. And while there were moments of actual scariness it was all resolved far too quickly. Apparently it's not that hard to appease vengeful spirits these days.

We start with Nick suddenly waking from a nightmare, which he's apparently been having for weeks. Since he won't talk to Sarah about it, she consults Devon. Our resident bad witch suggests an inhibition-lowering tea (supposedly to get Nick to talk about what's bothering him) and then with a word manages to hypnotize Sarah into forgetting she ever spoke to Devon (presumably this is a side effect of the "relaxation" tea Devon has been giving Sarah). Once Sarah leaves, Devon brews up a potion that lets her get into Nick's mind, where she sees him reliving the death of Teresa (recap here). Armed with that information Devon decides to consult her tome of summoning spells. Enter the aforementioned vengeful spirit.

Strange things start happening around Nick, although he doesn't get concerned until he actually starts seeing Teresa. But after he hallucinates that Sarah has turned into Teresa as they're kissing, Sarah drags him to Devon who gives him some of her tea, telling him that whatever's bothering him won't go away without it. He doesn't trust Devon but he agrees that if the hallucinations don't stop soon he'll drink the tea.

Elsewhere, Claire's nerves are on edge. Not only did Emily nearly see her drinking blood but the biological aunt comes for a visit and brings a child services worker along with her. Although the child services woman is satisfied that Emily is in a great home, the aunt isn't letting up, asking to see a copy of the adoption papers. At least things are getting better between Claire and Dylan--their 50-year anniversary is coming up and they're planning on renewing their bond (marital as well as sire/sired).

As Nick has more and more Teresa encounters he finally decides he needs to check that she's really dead. After getting the location of her burial site from Dylan, Nick heads to what turns out to be a bog. I thought for sure he was going to get sucked under as he was digging but instead he cuts himself (I couldn't quite tell on what but I think it was a bone shard) and finds Teresa's necklace. The cut prompts him to go see good witch Dr. Peg, who administers spiritual advice as well as medical care. She tells him he needs to help Teresa's spirit move on but cautions that it'll only happen if she's ready to move on. Helpful.

It turns out Teresa's not quite ready to depart. She haunts Nick's house, returns her necklace (after he dropped it back at the burial site) via his garbage disposal, and nearly drowns Charlie in the pool. Finally she possesses Sarah (possibly because Sarah decided to put on the haunted necklace). Desperate, Nick makes a deal to kill himself (justice, according to Teresa) in exchange for her leaving his family unharmed. Of course before he offs himself he gives a teary, heartfelt apology for killing Teresa's brother. That's good enough for Teresa--she departs, leaving Nick alive and Sarah unaware of what happened.

The fallout of all this? We get another hint at what's up with Leigh (after being shot in the chest by Teresa, Leigh is fine. She claims she was wearing a vest but it's fairly obvious she wasn't. My theory about her being literally heartless is looking promising). After nearly dying Charlie realizes he loves Andie, so they're back together. And Nick comes clean with Sarah about everything--including the fact that Dylan's a vampire. Sarah wisely decides it's time to get the hell out of The Gates. Devon also suffers some disappointment when Nick returns her tea unopened. Maybe next time she should be a little less obvious when she's pushing it on someone.

Speaking of coming clean, Claire and Dylan decide it's time to tell Emily what they are. But surprise--Emily already knows! So they have some family bonding time over how old they are and what it's like to be vampires.

What's going to happen with Nick and family? I'm guessing they won't get very far. And if the show had more than two episodes left I'd wonder how long before Emily lets the family secret slip to the wrong person. But overall I remain unenthused.

Mythology: Vampires can make or break bonds with one another.

The Gates, Season 1 Episode 11 "Surfacing." Written by Grant Scharbo. Directed by Holly Dale. From ABC.
Posted by Aspasia B at 8:59 AM No comments: 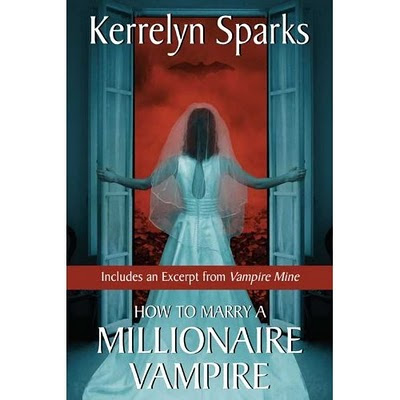 Just what the realm of the undead needed: gold diggers! But actually, How to Marry a Millionaire Vampire doesn't sound too bad. A human woman crosses over into an alternate vampire reality and wackiness ensues. And hey, you can't go wrong with a free download! It also comes with an excerpt of the author's upcoming (29 March) book, Vampire Mine, in which a Scottish vampire who'd given up on love meets a vulnerable fallen angel trapped in human form.

Find out more about Vampire Mine here.
Posted by Aspasia B at 4:41 PM No comments: