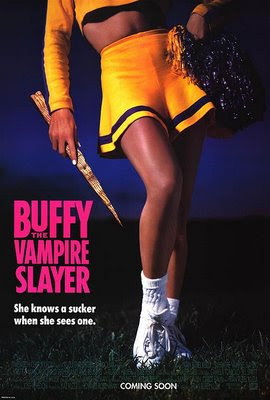 I love Buffy. No, forget love--I worship at the altar of Whedon. The man is a genius, not to mention creator of some of the best vampires in the history of ever. And it all started with this humble little movie. So it seems fitting to start this blog by re-watching Buffy the Vampire Slayer (1992).

Part Clueless (before Clueless) with a touch of Heathers and an undead element, BtVS is a fun if not fantastic 90s teen movie. Joss wrote and Fran Rubel Kuzui (future co-producer of the series) directed, which makes me wonder how much better it could have been if Joss had directed too. But no use crying over spilled blood and all that...

You can see the seeds of future characters on the Buffy series (Principal Flutie, Cordy, Giles, Spike), which is always entertaining. Luckily, not everything from the movie made it into the (far superior) series (actually hardly anything did). Among other things that were cut, I'm particularly grateful we didn't have to continue watching Buffy moan and clutch her stomach in pseudo-menstrual agony every time she's in the vicinity of the undead. I think that was supposed to represent some kind of primordial woman power. So glad they dropped it. Also happy they got rid of the vamps' floppy elfin ears! I couldn't imagine Angel or Spike looking like rejects from the Lord of the Rings auditions.

The fight scenes are pretty lacklustre, and Kristy Swanson's acting seems like all her knowledge of teenagers was based on someone else's vague description of them. Luke Perry (Pike), on the other hand, is actually pretty good. Both his character and his portrayal are enjoyable; his 90210 experience probably helped him play another teenager long past his "best before" date. The vamps aren't overly scary or interesting--they mostly skulk around making guttural noises, laughing maniacally, and showing off their new goth-ish makeovers, but Benny (David Arquette) and Amilyn (Paul Reubens) are entertaining, getting a lot of the best lines in the film. Lothos (Rutger Hauer) would probably be more menacing without the 70s porn-star mustache and haircut and Halloween-costume cape.

I think the best way to view BtVS is not as a movie unto itself, but rather as the early rough draft for the awesomeness that is to come. Watch it, laugh with it (or at it, as the case may be) and appreciate Buffy the series all the more.

Cassandra: What do you think about the ozone layer?
Buffy: Yeah, we gotta get rid of that.

Amilyn to Pike: You ruined my new jacket. (To vampire minion) Kill him a lot.

Pike to Buffy: This is no caring nurturer. He's a blood-sucking fiend from beyond the grave!

(After Amilyn has lost his arm) Amilyn: We're immortal, Buffy; we can do anything.
Buffy: Oh yeah? Clap!
Posted by Aspasia B at 3:37 PM