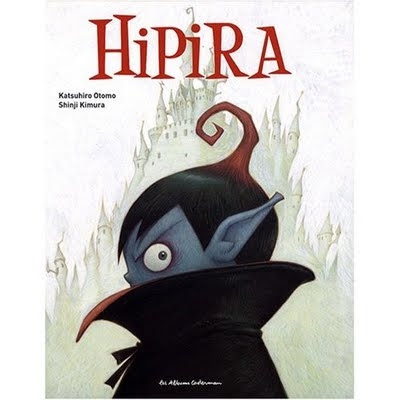 When I was a kid, way back in the dark ages of BC (Before Cable), there weren't many options for vampire-loving ankle-biters. We had The Count on Sesame Street, Bunnicula, and the cheezefest of The Hilarious House of Frightenstein (although as bad as it was, I remember loving it, probably because it fed my need for all things monstrous. I'm sure Vincent Price's contribution didn't hurt, either.) These days things seem a little better for the rug rats--or at least more interesting, thanks to movies like The Little Vampire and books like Hipira.

Hipira is a mischievous young vampire living in the vampire-town of Salta, where it's always night. The book comprises a series of five short stories. In "The Tale of Soul," Hipira encounters the town elder who is using magic to distill human souls into sprites. The idea is to drink the blood of the sprites in order to go to hell (which for vampires is heaven). Of course the spell goes wrong, but at least Hipira gets a friend (a sprite named Soul) out of it. The whole putting human souls through a wringer and then going to hell thing might be a tad dark for the younger set, but it's just the right kind of twisted for some of us (and is it just me or is the whole concept so quintessentially Japanese?)

In "Cock-A-Doodle-Doo!" Hipira practices flying and freaks out the entire town by imitating a rooster and making them think the sun is rising for the first time in 2000 years (they are not amused).

In "The Frog Prince," Hipira and Soul are playing in the forest at the back of the town when they come across a briar pixie who needs their help to find out why the river has stopped flowing. They discover the reason, along with a bloated monster that tries to eat them whole. They save the day but Hipira earns himself an enemy.

"School is Fun" finds Hipira in school learning about vampire history. Or at least, someone who looks like Hipira is at school. There's also an underwhelming--but cute--cameo by Dracula.

In "A New Friend" a meterorite tears through Salta's sky, letting a shaft of sun in. The initial panic over being turned into ash seems to subside pretty quickly when the vamps decide sunglasses are really nifty (how glasses will protect them from fiery instant death is not for us to question). When Hipira notices the meteor is sprouting a plant, he waters it until it grows massive and begins producing seed pods full of devil-like alien babies. It only gets weirder from there.

Hipira's attempts at being scary are ridiculously cute (a fact that he'd no doubt despise). Otomo and Kimura's backgrounds in film really show in the gorgeous, moody artwork in the book. For that reason alone I think Hipira is as entertaining for adults as it is for kids. Personally I'd love to see this animated. If you know a kid who's into vampires (or just likes things on the dark side), then this is the book for them. But then again, why should the tots get all the good stuff?

My name is Hipira. The truth is, I'm a vampire! Everybody had better be really afraid of me!


Hipira by Katsuhiro Otomo (writer) and Shinji Kimura (illustrator). Published by DH Press (a division of Dark Horse). Recommended for ages 12+ (but I think you could go younger).
Posted by Aspasia B at 8:35 AM