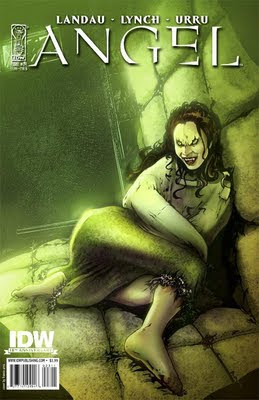 I really loved the character of Drusilla when she was still on Buffy. She was eerie and crazy and had a fun accent and the best wardrobe. She lost something, I think, when she went to Angel. Her edge seemed to dull a bit as she ditched the Victorian wardrobe and became a modern girl in the big city (TM). It was hard to imagine the new Drusilla making out with a slime-dripping chaos demon on a park bench. I'm sure it didn't help that she no longer had Spike to play off of (those two really were the perfect couple).

But still, I had been wondering what happened to Dru, where she's been while Buffy went to Scotland and Angel went to Hell (again). Turns out she's been hanging out in an insane asylum in LA.

Angel #24 is part one of a two-issue special about what Drusilla has been up to lately. Starting off before the fall of LA, we discover that Dru has been brought to the asylum under mysterious circumstances. Discovered in an alley by the police, bloody and wounded, it's unclear whether Dru was attacked or is into some serious self-mutilation (possibly involving a sword and a stake). Meanwhile it seems that some people at the asylum know what she is and are keeping her there for a reason, while the rest believe she's a violent nutjob with boundary issues (really, they're all right).

One of the best things about Angel #24 is that it seems Drusilla has her edge back (this might have something to do with actress Juliet Landau's contribution to the script). The artwork is also beautiful--Dru moves like a marauding ballerina as she makes short work of anyone standing between her and the exit. In addition, the colouring is very well done--lots of soft greys and blues and greens--with just the right amount of red to convey the proper tone of the story and the essence of Dru. There's also a small gallery of photos of Landau at the back, if you're into that sort of thing.

The problem I had with this issue is that it's short. It seems to just be getting started when the little "to be continued" notice pops up on the page. There's also a ton of questions left in its wake--too many to be answered in any sort of satisfying way within the span of merely two issues (especially if part two is as short as part one). I really think a character like Drusilla needs more than two issues to properly update (or conclude) her story. Unless she becomes a regular again, which is an intriguing possibility. I guess we'll have to wait to find out. In the meantime, my interest in Dru has been rekindled. I'm looking forward to reading more.

Angel Issue #24; art by Franco Urru. Written by Juliet Landau and Brian Lynch. From IDW Publishing.
Posted by Aspasia B at 1:50 PM