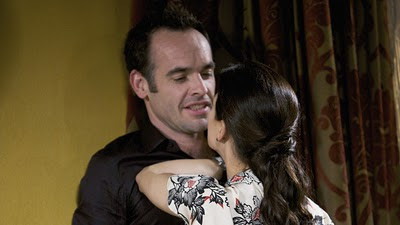 It's been awhile since I've caught an episode of The Gates (bad blogger, bad!) but the interesting thing about taking such a long break and getting a chance to watch some of the other vampire shows out there, it really emphasizes how underwhelming this show is. It's not bad, but that's about the most you can say. There's no outstanding characters, witty dialogue, or compelling relationships to draw you in. Every time they look like they're starting to get the hang of it, the show reverts back to the mundane. I don't know--I'm kind of mad at ABC right now for cancelling Pushing Daisies so they could get shows like this on the air instead.

Anyway, although the episode centres around the murder of Barbara Jansen (The Gates' resident gossip, and witness to Claire's late-night excursion with Christian--aka not her husband) by a vampire, not a hell of a lot happens. Nick suspects Dylan. Dylan has a rock solid alibi. Nick wants the names of all the vampires in The Gates. Dylan refuses and claims the vampires will carry out their own investigation of the murder. Nick has Dylan followed and finds out who he talks to (all the vampires in The Gates--convenient). Nick finds out Dylan spoke to Gloria, Barbara's best friend and former lover. Gloria admits she found Barbara and tried to turn her in order to save her, but it was too late. Gloria gets kidnapped by the other vampires. Nick suspects Dylan. Dylan had nothing to do with it but he'll try to keep the other vampires from executing Gloria until Nick can find out who killed Barbara. Cue the "twist" ending that really isn't all that unpredictable. Cleared of all wrongdoing by the other vampires, Gloria thanks Nick for saving her life. Nick asks Dylan what would happen to him if the other vampires found out he killed Teresa to save Nick. Dylan confirms the punishment would be death. Nick shakes his hand and tells him he owes him.

I just saved you an hour of your life better spent elsewhere (btw, the human ex husband did it, but it was completely accidental).

During the course of his investigation, though, Dylan discovers Christian is in town. He finds Christian at his favourite bar and the reunion isn't what you'd expect. Not only is Dylan completely unaware that anything is going on between Christian and Claire (including Christian's longstanding love for Claire) but it turns out he and Dylan are best friends. Cue the surprise dinner guest at Dylan and Claire's that night with requisite tension (unnoticed by the clueless Dylan) between Claire and Christian.

Claire and uptight Karen don't like each other and have an entertaining exchange where Karen makes a snide comment about Claire's excessive sunscreen use (vampire!) and Claire offers Karen a silver necklace (werewolf!) It adds a whole new dimension to catty cliques.

Surprisingly the most interesting part of the episode centers around Devon. When she volunteers to host a fundraiser at her spa, you know she's up to something, but all seems to be going well until the end when she unleashes some of her pent-up bitterness at her ex (Frank) and his new wife, Vanessa. After they're gone she opens up to Sarah about how her relationship with Frank ended (she found out on their 10th anniversary that he'd been sleeping with Vanessa for years and the entire town knew about it). But after even Sarah leaves, Devon heads to the back of the store where she retrieves Vanessa's facial peel remnants (a rubbery, creepy-looking mask) and hangs it next to a row of similar masks. What kind of spell is she weaving? Hell hath no fury like a witch scorned. I'm not a fan of Devon but I am intrigued to see her wreak her revenge.

There's also a nice camera shot earlier that's worth mentioning. As Nick watches the security tape outside the club Barbara frequented, he sees her getting into her car and driving away. Suddenly from the shadows, the headlights of another car light up--like a large predator opening it's eyes. Very cool effect.

Speaking of Frank and revenge, the episode ends with Nick paying him a visit. As Nick confronts him about all the non-humans within The Gates, Frank coolly threatens Nick. Suddenly Dylan arrives, having been summoned earlier by Frank. As he and Nick look on, confused and then horrified, Frank shows them the tape of Dylan killing Teresa. Oops. Keeping their secrets might be the best way to protect families (according to Frank) but it's an even better way to protect yourself apparently.

So, like I said--pretty middle-of-the-road stuff--basically soap opera fare with a supernatural element thrown in. If The Gates really wants to thrive, the producers should consider who the audience actually is and maybe focus more on the supernatural and less on the soap opera.

Weaknesses: Sunlight (they protect themselves with a skin lotion).

Mythology: No killing is allowed within The Gates; any vampire that breaks this rule will be killed by the others. To turn a human, the vampire needs to feed from the human until they're on the edge of death, then they give their own blood back to seal the bond.

Christian: Claire, you and I both know it always should have been us.
Claire: Don't call me again.

Devon: Welcome to suburbia, where everyone uses their perfectly manicured nails to scratch each other's eyes out.

Dylan: You should have stayed in touch.
Christian: Yeah, well. I assumed you and Claire wanted to leave your old life behind and that's what I...am. I'm your old life.

Christian: And then your mother proceeds to drink this Irishman...under the table. Poor bastard didn't know what had hit him, right?
Claire: Language, Christian.
Christian: What, I can't say 'Irishman'?

The Gates, Season 1 Episode 6 "Jurisdiction." Written by Jared Romero. Directed by David Grossman. From ABC.
Posted by Aspasia B at 3:59 PM