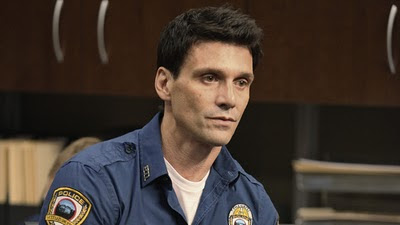 Really this episode shouldn't be titled "Repercussions" as it's more about secrets and lies than their consequences, but who am I to quibble? There's a fair bit going on in "Repercussions," most of it not out in the open.

A lot of the action centers around Teresa/Amanda. From the beginning of the episode as we watch Dylan burying her body in the forest, to the end when Frank watches her being killed, it's all about a minor character who became a major plot device. Nick spends the episode struggling with fear over what almost happened, guilt over what did happen, mistrust of Dylan (especially now that he knows what Dylan is), and panic over trying to keep a worried Marcus from finding out what happened to his girlfriend.

Meanwhile Dylan is trying to keep the situation--and Nick--under control, while at the same time protecting his own family. His actions are on the strange (read: not entirely believable) side, though. He starts off reassuring. Within hours he's flying off the handle and threatening Nick in a not-so-subtle way (displaying his vampire abilities in front of at least two Gates security cameras). Finally he decides to take the laid-back approach. In the end we don't even know if anything he was doing would have made a difference as Nick's fears are allayed when Marcus comes to the conclusion that Teresa/Amanda had ulterior motives and left of her own volition.

Meanwhile, even as Claire is being the supportive wife to Dylan (he ended up telling her what happened and she is far more understanding about it than he would have been), she has her own problem to worry about. Town gossip Barbara is already making veiled remarks in public about Claire's night out with Christian. At first Claire calls Christian for his help in taking care of the situation, but then she changes her mind and decides to deal with it herself. Whatever she's planning, we don't get to see it this episode, but I'm looking forward to finding out what Claire's solution will be.

The Andie-succubus storyline is moving forward and getting unnecessarily dramatic. Now that Dr. Peg's given Charlie the all-clear on his "mono," he's ready to pick up where he and Andie left off, but she's not feeling so amorous. Between some scary online research into succubi and the doctor telling her if she takes medicine for the rest of her life she might be able to control it, Andie isn't feeling so great about her mother's heritage. She decides to take things slow with Charlie. She also questions her dad about how he and her mom made their relationship work without benefit of medication (apparently he was sick a lot due to the succubus's tendency to drain men's life forces). For some reason Andie is really reluctant to take the medication, but I don't know what the problem is. Seriously--it's a herbal supplement--I take a bunch of them every day just as preventatives. See what I mean about unnecessary drama? Her dad does his best to dissuade her from taking the "very dangerous" risk he and her mom took, but Andie doesn't seem entirely convinced. In the end, dad confides his worries to Dr. Peg, who tries brushing them off--that is, until dad confesses that Andie's mom didn't really die in a car wreck. It turns out one night she lost control and he had to kill her or be killed. That's what you get for having a demon lover.

There's also a new twist with Devon, and it's actually interesting. It turns out that Frank (builder of the Gates) Buckley is her ex-husband and things didn't end well. When his new wife--and former mistress--Vanessa comes into Devon's shop, Devon goes out of her way to make amends with her successor (not that we're buying it for a second). Vanessa is happy enough with their newfound peace that she invites Devon to a party she and Frank are hosting in Nick's honour that night. Of course once there, the first chance Devon gets she sneaks into her former bedroom and gets into Frank's safe. Inside--and this is the interesting bit--is a pile of DVD cases, each labelled with the names of residents of the Gates. Devon grabs the disc from inside her case and stashes it in her purse, leaving the case behind so nothing seems amiss. Later we see her watching the disc; it turns out to be footage of her and Chad Taylor--arrested, despite his protests of innocence, for killing the former police chief--hooking up. Her and Chad is no surprise, but how did Frank get the disc and what does he plan on doing with it?

The episode ends nicely, with Nick giving a speech about how neighbours look out for and take care of one another. As he talks we see shots of Dylan and Claire, of Andie's dad noticing the flowers beside her bed (a gift from Charlie), of Devon watching the DVD of her tryst with Chad (and then destroying the disc), and finally of Frank watching another DVD--of Teresa's murder. He removes the disc from the player and puts it into a case that he then labels with Dylan and Nick's names. Finally the disc is placed in the safe. Who is Frank really, why did he build the Gates, and what is he up to?

Although some of the storylines get resolved a little too quickly on The Gates, the show at least is never lacking in new intrigues. The vampires (finally) seem to be getting a more central role. And though some of the drama is forced, some also works well and draws you in. The Gates is still uneven, but I'm confident it'll find its footing.

Appearance: Human, with small sharp fangs that extend at will.

Mythology: Vampires are not bothered by holy water or garlic, and they can be seen in mirrors. If a vampire reveals what he is to outsiders (and is caught) he will be killed (by other vamps) and his family will be "banished."

Dylan: [to Nick, handing him the location of Teresa's body, as Nick requested] I trust you will protect my family like I did yours.

The Gates, Season 1 Episode 5 "Repercussions." Written by Scott Nimerfro. Directed by David Solomon. From ABC.
Posted by Aspasia B at 12:13 PM