All Together Dead by Charlaine Harris 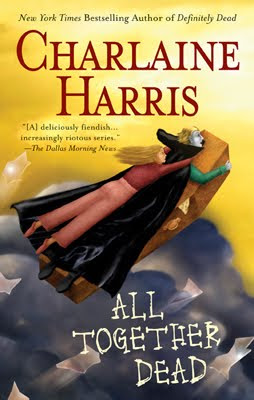 I'm not sure it's possible for a book series to jump the shark, but if it is Charlaine Harris has managed it with All Together Dead.

She didn't do it with her new continuity person, who showed their incompetence within the first few chapters.

She didn't do it with her resumption of endless mundane detail.

She didn't do it when Sookie and Quinn finally had sex (that was more or less okay).

She didn't even do it with Jason's last-minute wedding to were-panther Crystal. Or Russell Edgington's surprise wedding to the King of Indiana. Or Tara's unexpected nuptials with J.B. du Rone (do you see a pattern here?)

The book takes place post-Katrina, with the Queen of Louisiana seriously down on her luck and the Louisiana vampires reduced in numbers (again thanks to Katrina). I just want to interject a moment to say I think including Katrina ended up being a mistake. The idea that vampires have come out of the coffin and into human society works in the context of 'sometime in the near future' or 'vague alternate universe'. But when you link the storyline to a major contemporary event, it throws the reader out of the story. We know vampires aren't out in our world, we know they didn't suffer during Katrina; suddenly I can't lose myself in the story anymore. And after all, what else is the point of books like these?

Anyway, the Louisiana vampire contingent are determined to put on a display of strength and solidarity at the upcoming vampire conference in Illinois, which is where most of the book takes place. Sookie is being forced by the Queen to go, although she's appeased by the large sum of money she'll be receiving as payment. Once they arrive, Harris unleashes what seems to be the usual pattern of events for her books: dullness followed by multiple crises and interspersed with a few enjoyable moments.

It's at the conference when the proverbial shark is jumped. Harris introduces a pair of Britlingens, uber bodyguards from another dimension (as well as from some of her other books/stories). In this case they've been hired to guard the King of Kentucky. I'm not opposed to crossovers among characters/universes--in principle. But I have a problem with this crossover. First, I don't particularly like the Britlingens or their universe (we were first introduced in Must Love Hellhounds and I was less than impressed). Second, their inclusion comes off as forced, as though Harris felt the need to just put them in somewhere. Lastly, are vampires, weres, witches, fairies, and demons not enough; do we really need to be bringing in extra-dimensional characters? It's just getting silly at this point. The fact that they were given a larger role in the story than they merited didn't help, either. All this adds up to one massive fail.

Add to that a few plot holes (why would the bad guys alert the vampires to the presence of unclaimed coffins in the basement if the coffins are full of explosives and meant to stay in the basement anyway?), Sookie's inexplicable (and annoying) aversion to Eric, and the utter uselessness of the vampires (who apparently can't put two and two together without Sookie to show them how) and you've got one unsatisfying book. I think it's safe to say that most, if not all, the regular readers of this series are more interested in the Sookie-Eric dynamic than anything else. And yet, seven books in, we still remain unsatisfied. Meanwhile we're forced to read play-by-plays of bridal showers and minutiae about countless minor characters. I think it's time Charlaine Harris and her editors realize that the Sookie Stackhouse universe has bigger things than the weather to worry about.

Appearance: Pale humans with long, sharp fangs that extend when they're excited or hungry. Some have eyes that glow. Their skin also glows, although only Sookie can see it (so far).

Strengths: Super speed, strength, ability to move silently. Every vampire has a gift: some can fly, some are skilled with swords, and some have an unusually strong and loving connection with their "children."

Mythology: The more a human drinks from a vampire (and vice-versa) the closer a human becomes to being a vampire. Repeated blood exchanges also end up forming increasingly strong bonds where the vampire and human can sense each other and care about each other (whether they want to or not).

Eric: Do you love him?
Sookie: Don't know yet.
Eric: Did you love me?
...Eric waited...
Sookie: Maybe. Sort of. But I knew all along that whoever was with me, it wasn't the real you. And I knew sooner or later you'd remember who you were and what you were.

All Together Dead by Charlaine Harris. From Penguin (Ace Books).
Posted by Aspasia B at 2:10 PM