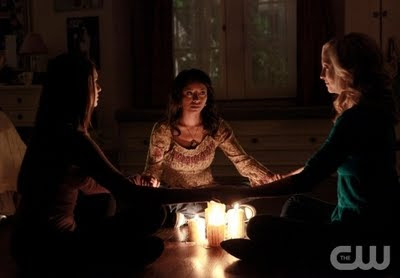 We were so close. We could almost reach out and just grab it: a decently watchable show. But then it slipped away, along with the notion that the producers of The Vampire Diaries remotely know what they're doing.

I've mentioned before that the show doesn't know whether it's about teen drama or the paranormal. It does finally seem to be slipping the paranormal mantle on more securely. This is a good thing. The real problem now is that the pacing on The Vampire Diaries sucks. Allow me to illustrate: within the span of nine short episodes...
If you haven't already figured it out--that's a hell of a lot to happen. They could have easily cut half of that out and expanded the rest of it into a perfectly compelling (no pun intended) season. Yet here we are, not even halfway through, dreading the ever more ludicrous lengths we know the writers will now have to go to in order to achieve "new and exciting" storylines. Sigh. It's not porn, people--you don't have to get the plot out of the way in the first three minutes. It seems almost silly at this point to spend any time describing what happened in "History Repeating." Apparently none of it is all that significant.

Here's the Cliffs Notes anyway. Damon made a deal with Bonnie's ancestor Emily Bennett to use her witchy powers to save Katherine and the 27 other vampires in the burning church (oh yeah--turns out those supposed Union sympathizers were actually vampires) in exchange for Damon protecting her bloodline (presumably by not eating her descendants). Katherine et al have been buried alive in a tomb under the church all along. Damon just needs the Very Important Crystal to unlock them, not only to be reunited with his love, Katherine, but to get back at all the jerks of yesteryear by unleashing a bunch of vampires on the town 150 years later. Too bad dead Emily has other ideas. Undergoing a moral epiphany from beyond the grave, she visits Bonnie in her dreams before ultimately possessing her. She then performs a little of the magicks (look--a burning pentagram!) and destroys the crystal before departing again. And somehow it doesn't occur to either her or Stefan that breaking her end of the bargain frees Damon to have his way with hapless Bonnie. Of course he botches it again (worst vampire ever) and Stefan heals Bonnie with his own blood. Damon is a broken man now that his diabolical plan has been foiled, telling Stefan he'll finally leave town. Sure thing--any minute now.

In other Mystic Falls news, Caroline and Matt bond over their cuddle session of the previous episode, not to mention their mutual loneliness. Jeremy is taking school seriously again (thanks to Damon's compelling skillz) and while researching a paper comes across one of his ancestor's journals (a new diary? May it be more interesting than the last ones). A new history teacher (Alaric Salzman, played by Matt Davis) arrives wearing a tacky ring and showing signs of having a blood habit (I believe hints that he's a vampire are just misdirection. Either that or the writers are as skilled at subtlety as they are at pacing. But my money's on him being a hunter, what with the unsolved murder of his wife he finds the time to mention). Oh yeah, and Jenna's ex, Logan, is still alive (or, I should say, he's not dead). He's back and paler than ever! Fantastic.

And for anyone wondering where Elayna and Stefan's relationship stands this week: she's into it and he's not. Expect that to change minute by minute.

I'm not sure what wackiness will transpire next episode, but you can be sure there'll be a lot of it. Just don't count on it being interesting (at least, not for long). Anyone else really missing Buffy right about now?

Weaknesses: Vampires who feed exclusively on animal blood are weaker, more vulnerable to pain. A strong vampire is weaker than a strong witch.

Mythology: In order to be turned, a human has to die with vampire blood still in their system. Once the blood has cleared their system/worn off, there's no chance of the human being turned.

Bonnie: I'm a witch.
Caroline: And don't we all know it.

Damon: (after Stefan reveals that he was actually the last one to spend time with Katherine--wink wink, nudge nudge) I can rip your heart out and not think twice about it.
Stefan: Yeah, I've heard that before.

Damon: Katherine never compelled me. I knew everything, every step of the way.

The Vampire Diaries, Season 1 Episode 9 "History Repeating." Written by Bryan M. Holdman and Brian Young. Directed by Marcos Siega. From The CW.
Posted by Aspasia B at 3:57 PM