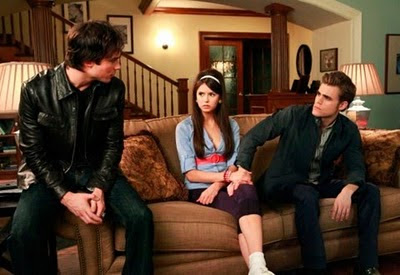 Caroline might be one of my least favourite characters ever but she does get a lot of the best lines in The Vampire Diaries (sad, isn't it?) In "Unpleasantville" she actually voices what I was thinking when she asks Elayna if her relationship is now a threesome with the Salvatore brothers. Elayna emphatically says no, but I'm willing to bet I'm not the only one wondering at this point. I know in the books (which I haven't yet read) the character of Elayna is torn between the brothers, but I was under the impression that the show was diverging from the original story. Maybe not so much after all. Of course, why TV Elayna would be attracted to (or even able to tolerate) Damon is the real mystery here. As I mentioned in my last review, Damon (who I actually do like as a character) has done a lot of evil things, and girls--there's a huge difference between a bad boy and an evil one. Elayna apparently hasn't caught on, though.

Moving on to the episode, now that Elayna and Stefan are getting along again (any takers on how long that will last?) they muse over who the vampire in the road (the one Elayna hit with her car) might have been. Stefan also gives her a boatload of vervain--enough for her family, friends, random strangers she happens across... Once again I'm annoyed that in "Bloodlines" Elayna went vervain-less and nothing happened. Wouldn't it have added an intriguing shot of tension to have the previously safe Elayna suddenly under the control of some nefarious fanged baddie? Honestly, I think the whole vervain vampire-protection thing is a big cop out, especially now that everyone's got some. Why give vampires the power to compel humans if they never get to use that ability? The writers should have just kept it limited to Elayna. Which reminds me: why does Elayna skirt around the reason she's giving Caroline a vervain-containing necklace? Caroline was not only dating Damon, but was his regular meal--I think Elayna can be up-front about the vervain. Come to think of it, Caroline might just have moved to second in the annoying character rankings--Elayna's officially slipped into first (helped in no small part by Nina Dobrev's acting skills--or lack thereof).

Anyway, as Elayna and Stefan wonder about the mystery vamp, he shows up at the door in the guise of a pizza delivery guy! That's some clever subterfuge. Of course Jeremy invites him in, in the most hamfisted way imaginable, and mystery vamp henceforth has a standing invite into Elayna's house. Later, in a scene right out of Scream, mystery vamp calls up Sidney--I mean Elayna--to tell her that he knows what she did last summer--I mean, a couple of nights before. Sorry--I'm suddenly awash in confusion over all the Kevin Williamson content. You know writers have run out of ideas when they start ripping off their own work.

After the creepy call, mystery vamp proceeds to stalk Elayna, even attacking her in her living room (luckily Stefan showed up at just the right moment to thwart him). Stefan and (inexplicably) Damon then decide to set a trap to get the vamp that very night, because they obviously can't let it go when this guy has an invitation into Elayna's house. What's their big plan? Accompanying Elayna to the 1950s-theme dance at school and using her as bait to draw the stalker out. Sure, why not?

If there was any doubt the boys would get their man, push all such thoughts aside. Of course they do, grilling and torturing him before Stefan finishes him off with a broom handle (I was kind of hoping Elayna would do the job with a pencil, but sadly that wasn't the case). Before his anticlimactic death, mystery vamp (whose name turns out to be Noah) lets slip that he knew Katherine (hence the appeal of going after Elayna) and then scoffs that Stefan and Damon don't even remember him (what--it's only been 120 years). I mention this because I have a feeling it's going to come up again in future.

As usual, lots of other things were going on besides the main event. Jonathon Gilbert's journal has practically become a character unto itself. After writing a paper based on it, Jeremy loans the journal to Alaric Saltzman, who claims a Civil War-era account is like porn for history teachers (in one fell swoop elevating the reputations of history teachers everywhere). Meanwhile, Damon's also looking for the journal because it supposedly contains the location of Emily's grimoire--which he needs to reverse her spell trapping Katherine and the other vampires (it turns out the vampire-hunting Founding Families weren't above burning witches and taking their belongings). Oh, and it turns out Jeremy's new friend Anna is yet another vampire, and she wants the journal too. Her and her buddies (including the recently deceased Noah and her boyfriend Ben) really want to free Katherine and the others, but for some reason aren't too fond of Damon.

Ben, meanwhile, is a recent graduate of Mystic Falls High School, former football star, bartender at the local bar, and part of the ranks of the undead. While his girl Anna tries to get the journal from Jeremy, Ben is busy wooing witch Bonnie (who I guess has her powers back, although it was never resolved). Bonnie is already falling for him, so I suppose we'll find out soon enough how she fits into the scheme.

Alaric Saltzman's real interest in the journal wasn't mentioned, but it probably has something to do with his need for revenge against Damon. Speaking of which, he tries getting info from Damon at the dance, although he manages to set off Damon's spidey sense pretty quickly. After catching him leaving the scene of the staking, Damon compels and questions him. Saltzman's responses are what you'd expect from the average clueless human, but of course that's because he's got a handful of that pesky vervain. You'd think vampires would learn to check for that stuff instead of just assuming humans are under their spell.

Much later when Saltzman escorts Jenna home, he happens to mention that his dead wife (whom he married young) was from the area. He also mentions that her name was Isabel--the very same name as the teenager who *gasp* gave birth to baby Elayna and abandoned her with the Gilberts! Jenna perks up when she hears this because apparently there's only one Isabel in the entire state of Virginia and she clearly must be Elayna's birth mother. So does that make Saltzman Elayna's dad? It also brings up the question: If Isabel Saltzman was Elayna's birth mother, is that somehow related to why Damon killed her?

You getting all this?

Oh, and apparently no one in town knew that Elayna was adopted because Elayna's dad, a doctor, doctored up the paperwork so it seemed like he and his wife were her birth parents. Somehow no one in this small town noticed that the doctor's wife had a baby out of nowhere. If they say so.

Caroline and Matt also hook up, proving that if you're lonely enough anyone can seem appealing. By the way, is it just me or is Caroline unduly snobby for someone whose mom is a lowly civil servant (lowly in the sense that they don't exactly make the big bucks)? She spends most of her onscreen time in "Unpleasantville" looking down on the people pathetic enough to have to work in the service industry, including her new boyfriend Matt, who's taken a busboy job alongside vampire Ben at the bar. Wow--this show is, like, bringing up class issues and everything. It's so deep.

Once Elayna is safe again (for the moment), Stefan focuses on setting up Damon, promising to help his brother free Katherine (and kill the other 26 vampires) when he has no intention of letting Katherine go. Damon believes him, which isn't surprising given his habit of taking everything at face value (because untrustworthy people always trust everyone else). Stefan lets Elayna in on the plan, and she admits she's bonded with Damon even though she doesn't trust him. Anyone else secretly hoping the vamps all get out and unleash a bloodbath on Mystic Falls? Just me, then, huh?

When The Vampire Diaries started I was worried that it didn't know whether it was a teen show or a vampire/horror show. Well, I finally figured out what it really is: a soap opera, with all the requisite melodrama and absolutely no substance. I'm just looking forward to the long-lost twin storyline...uh, wait a minute...okay, then the possession subplot--no, wait. Kidnapping of the heroine? Secret baby? Plots and conspiracies? Okay, I guess the show's already covered all the soap opera basics. From now on I won't even worry about the loose ends and lack of logic--in the end, it'll all probably turn out to have been Caroline's dream. Hey, at least it's giving the people who watch something to talk about--and then promptly forget.

Weaknesses: The ability to compel (hypnotize/control) humans--except when said humans have vervain on or in them. Stakes, wood.

Mythology: Vervain needs to be on or in a human in order to be effective. Vampires can't sense one another. A vampire needs an invitation to enter a private residence, but once invited they're always invited.

Bonnie: (to Damon) You know I can start fires with my mind. Fires kill vampires, right? [They tend to kill humans too, but never mind...]

Caroline: (By way of apology to Matt) I'm a terrible, awful person, but I'm working on it.

The Vampire Diaries, Season1 Episode 12 "Unpleasantville." Written by Barbie Kligman and Brian Young. Directed by Liz Friedlander. From The CW.
Posted by Aspasia B at 1:54 PM