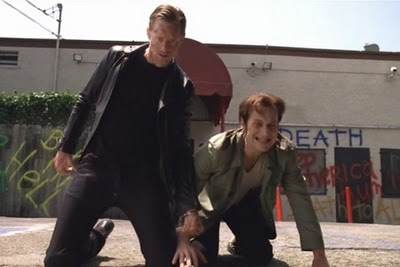 I have a confession to make: I'm not in love with Season 3 of True Blood. I don't know if it was a weak season or if it's been tainted for me by the generally disappointing Sookie Stackhouse books or if I've simply become too critical. But other than a few standout scenes throughout the season I don't feel any burning need to go back and watch again. In fact, watching episodes a second time has left me overwhelmingly...bored. Considering I'll happily sit through Forever Knight marathons, that's just plain sad.

Anyway, the big news in "Fresh Blood" is Eric's plan for Sookie. After being chained in Fangtasia's basement, Sookie is quickly rescued by a bitter Yvetta (who is somehow pissed off because Eric didn't leave anything to her in his will). Meanwhile Bill is upstairs fighting with Pam, who is weaker than he is but is holding her own by spraying colloidal silver into his eyes. Sookie manages to overcome Pam with a silver chain and then threatens her with the colloidal silver in order to get information. Considering how much of the Magister's torture Pam withstood, she crumbles pretty quickly in the face of a little water and silver cocktail.

Eric, meanwhile, is busy confronting Russell and convincing him not to kill them all...yet. Russell is skeptical but the possibility of being able to walk in the sun (after drinking fairy--aka Sookie--blood) is too tempting to resist.

After getting away from Fangtasia Bill and Sookie have a relationship talk as she drives. Sookie claims she no longer trusts Bill or Eric. She also admits that she does have some feelings for Eric, although she doesn't believe they're anything to do with love. She and Bill then play a game of 'what-if', where their life together would be completely different (she'd be a real estate agent and he'd teach third grade). Just as Sookie declares their ideal life would be Eric-free, Eric and Russell appear in the road ahead of them. Sookie slams on the brakes and Russell brings the car to a complete stop. So much for their happy thoughts.

Back at Fangtasia, Eric has Bill start a fight with him in the parking lot while Russell escorts Sookie inside. Once they're alone Eric lets Bill in on his plan. Inside Bill is restrained while Eric informs Russell that drinking Sookie's blood will allow him to walk in the sunlight. Sookie did say she no longer trusts Bill but the way she's always so quick to think the worst of him--and even Eric--is just annoying (and senseless). Despite Bill trying to signal her with his eyes she decides the vampires are clearly sacrificing her and reacts like a bratty teenager, screaming at the top of her lungs that she hates them. I was never a huge fan of Sookie but season 3 has just killed her for me. Since killing her off isn't an option can she please be put under some kind of personality-altering spell to make her less whiny and stupid?

Anyway, Russell buys Eric's story and agrees to take Sookie's blood--if Eric will go first. Bill reminds them that if they drain her their first taste of fairy blood will also be their last. There's a sweet moment between Eric and Pam where you really get a sense of the bond between them. I'd love to see more of these. Then he approaches Sookie. Eric at least tries to be gentle, and there's another lovely moment when he caresses the side of Sookie's face. Russell of course has no patience for this and just grabs Sookie and chomps down. Eric hesitates for a second as though he wants to pull Russell off her but then his fangs come out and he bites alongside his enemy. A minute later, as everyone else watches on the security monitors, Eric steps outside into the sunlight. A look of amazement crosses his face as he steps into the light and then he turns and beckons to Russell. What Russell doesn't see is that Eric has started sizzling and is praying that Russell won't notice.

Russell is crying in joy as he walks into the light while inside Pam is crying with sorrow, knowing that her maker is about to die. Meanwhile Bill shouts at her to let him go so he can give blood to Sookie, who is now unconscious. As Russell approaches Eric, the younger vampire turns so that his scorched face comes into view. In an instant Eric has cuffed them together with silver handcuffs. Then he tells Russell to be brave: they're going to die together. Eric is kind of awesome.

In other news this episode, after his V trip with Jesus, Lafayette starts hallucinating demons; Jason decides Crystal being a werepanther is okay by him; Hoyt and Jessica resurrect their romance with a bite (good scene); Sam is drunk and angry and pisses off or alienates everyone in the bar, including Tommy who he fires and kicks out; Holly and Arlene perform a magical ritual but Arlene still doesn't lose the unwanted baby; Tara confronts Andy about lying over who shot Eggs; Tara and Sam connect emotionally and physically; Tommy breaks into Sam's office safe; and Summer and Maxine scheme to get Hoyt away from Jessica. Despite so much else going on, none of it is really that relevant this episode--although it's all clearly setting up future conflicts and storylines. Just keep the point form in mind and you'll be caught up.

I did enjoy most of the vampire scenes this episode and a couple of the human-only ones as well. But I can't get excited about any of it. There's no moment that's so fantastic it has me riveted to the screen (or anxious to watch it again). There's nothing that makes me scrutinize it from every angle and annoy all my friends with constant analyzing (actually, that's probably a good thing). I'm not saying that True Blood has been bad this season; I guess I'm just saying meh. Maybe that's worse.

Appearance: Super pale humans with red-rimmed eyes and snakelike fangs that descend or retract at will. They cry blood.

Mythology: Vampire blood (V) is used as a powerful drug and aphrodisiac by humans. It is believed that consuming fairy blood will make a vampire immune to sunlight; in reality it only offers temporary protection.

Pam: Don't leave me alone with this idiot immigrant!
Yvetta: Idiot? [laughs] In Tallinn I was cardiologist.

Russell: [after Eric tells him why he killed Talbot] My my--to lose the one man I ever loved because you miss your mommy and daddy, well that is a kick in the pants.

Tommy: [to Sam] Look at you all drunk and yelling. You're nothing but Joe Lee in a Sam suit.