October continues to favour vampire devotees, this time with the Bram Stoker International Film Festival, featuring independent international horror/suspense/sci fi films, documentaries, and shorts. Most of the movies aren't about vampires, but there's still plenty of bloody good entertainment, should you happen to be fortunate enough to be within easy reach of Whitby, England this weekend. Besides films, there's a free all-ages Vampire Walk on the 18th (to be led by "The Countess Dracula herself" Ingrid Pitt); opening night festivities, including burlesque/cabaret performances and The Mocky Horror Show; and guest speakers including the aforementioned Ms. Pitt (Countess Dracula, The House that Dripped Blood), New York Times best selling author G.P. Taylor (Shadowmancer), filmmaker Devi Snively (Death in Charge), author/journalist Gavin Baddeley (The Gospel of Filth), and writer/producer Rod Morris (Dying Breed).

The fourty-four films at the festival are unrated and, therefore, open only to the 18+ crowd. Vampire fans might want to check out:

Blood on the Highway: Dimwitted teenagers mistakenly wander into a Texas town populated by even dimmer-witted vampires. The remaining humans band together and prepare for battle. Directed by Barak Epstein and Blair Rowan.

Dracula, the Vampire and the Voivode: "The first documentary ever to reveal the TRUE story of Bram Stoker and his legendary novel..." Directed by Michael Bayley Hughes.

How My Dad Killed Dracula (short): When two young teens don't believe their cousin's dad killed Dracula, he picks up a shovel and starts digging. Directed by Sky Soleil.

Nightlife: A mockumentary about six vampires and the amateur hunters who stalk them (think reality TV meets The Lost Boys). Directed by Timothy Sanderson. 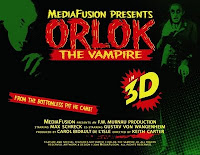 Orlok the Vampire: From the bottomless pit he came... and was re-imaged in 3D! World premiere. Directed by Keith Carter/F.W. Murnau.

Temptation: A murder victim is turned by a sympathetic vampire, and then has 48 hours to decide whether to kill herself or embrace an eternity of being undead. Directed by Catherine Taylor. 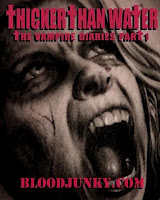 Thicker than Water- The Vampire Diaries Part 1: No relation to the TV series or the books by L.J. Smith. "The family that prays together... slays together." Directed by Phil Messerer.