The Vampire Diaries S1 E5 "You're Undead to Me" 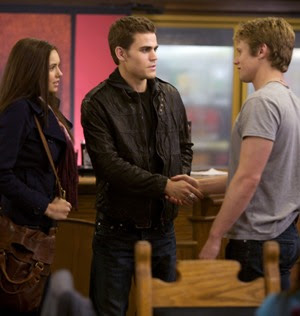 Having been less than impressed with the last couple of episodes of The Vampire Diaries, I was gratified to see that Episode 5, "You're Undead to Me," was more interesting than usual; at least I wasn't staring at the clock at 8:23 wondering how I was going to get through the rest of the hour. Of course it also exhibited signs of getting stupider (two words: Sexy Suds). But the impression this show is leaving on me is still not a good one; after I went to bed I dreamed that I fell asleep watching it. Seriously--not good. Let's just say my True Blood and Buffy dreams are a lot more...stimulating. But I digress...

"You're Undead to Me" starts with Damon still locked in the vervain grow-op room in Stefan's basement. His ring's been taken, and Stefan tells him he plans on leaving him there until his circulation stops and he can't move anymore. Then Stefan plans on moving Damon to "the family crypt," after which they can re-evaluate the situation in fifty years.

Things look pretty grim for Damon, but we've got to hand it to him--he's not one to easily give up. When he can't convince Zack (by throttling him) to let him out (Stefan inconveniently shows up and saves Zack) he focuses his efforts on calling Caroline to him. Her memory might be spotty, and she might be preoccupied with the "Sexy Suds" (gag) fundraiser car wash she's organizing, but a thrall is a thrall and it isn't long before she's on her way to Damon.

The car wash is annoying on numerous levels. Time was, people (even the ones on TV) didn't feel they needed to try so damn hard to be sexy. Personality and style were the key (for some of us they still are). Now there seems to be a certain pervasive desperation that's not even questioned. Women in particular, of all ages, are wasting their time and money--with dubious results--to achieve some plastic cookie cutter version of "sexy" that really isn't. Meanwhile, everyone's insecurities are raging, being goaded by idiotic messages from people who, in the end, don't matter in the slightest. Guess what? Wasting screen time on a storyline that involves a character planning a "sexy" car wash, then making a point of having the character tell everyone they have to be "sexy" at said car wash, before mentioning that even the band is helping out--or at least the ones who can wear a bikini--is just pathetic. Not to mention spending even more time on the car wash itself. Really, truly pathetic. Which ultimately just makes the show lame.

Elayna is not happy with Stefan, but then she so rarely is. She does an entertaining impression of him, but other than that it's mostly pouting, storming off, and questioning him even when she claims to believe him. Basically she's mad, madder, somewhat appeased, suspicious, and really suspicious. Granted, his vague answers to her questions would be irritating, but why is it any of her business what his history with Katherine was, or what his family's done for the last ten generations? I didn't realize background checks were standard in all new relationships. Stefan does try. He makes her dinner and admits all sorts of dull and unrevealing facts about himself ('You like the Beatles? Get out! I like the Beatles!) She seems happy enough until she cuts herself (that girl is quite accident prone) and notices his reflection in the window as he's vamping out. He gets the situation under control and she thinks she's hallucinating. But then at the car wash, an old man who claimed he recognized Stefan from years before shows up again and has a chat with Elayna. The old man claims to have stayed at the Salvatore boarding house back in 1953. He also claims to remember Damon too, as well as their rings, and says that Stefan hasn't aged a day since he saw him, just after his uncle (Joseph Salvatore) was attacked and killed by an animal. Elayna then grills Stefan not-so-subtly (although he seems oblivious) and begs Aunt Jenna's old/new flame, Logan (the reporter), to show her the old news stories apparently only he has access to (I guess people really don't know anymore what libraries are for). A little CSI: Mystic Falls later and Elayna has photgraphic evidence of Stefan in 1953. Da da duh.

Bonnie is still setting things on fire with her mind. Is she a witch or merely pyrokinetic? And for someone who's supposed to be Elayna's best friend, they barely seem to talk to each other. I think Stefan had more meaningful interaction with Bonnie this episode, and she doesn't even like him. Bonnie does provide a minor highlight, though, when she seeks help from her grandmother, who turns out to be played by Jasmine Guy! If you know Jasmine Guy from A Different World, this isn't so impressive. If, however, you know her as Roxy on Dead Like Me, you'll understand my enthusiasm.

Back to Damon, he finally gets Caroline's attention (between the crow he sends, his disembodied voice, and hallucinations of him, even someone as self-involved as Caroline was bound to notice eventually). She walks into his house (apparently Canadians and residents of Mystic Falls are the only people in North America who still leave their doors unlocked), wanders to the basement, and has a conversation with him before Zack finally shows up to stop her from letting Damon out. Alas, he's too late. As Caroline runs, Damon shows his gratitude for being locked up by breaking Zack's neck (he can't drink Zack's blood because it's loaded with vervain). But when he tries to follow Caroline outside, he sizzles like a piece of bacon. Finally--some vampire action in a show about vampires. What a novel concept.

Since Vicki and Jeremy finally hooked up (she even spent the night), it was inevitable that they would immediately start fighting. And since this is, more or less, a horror show, it was also inevitable she would die (when will teens learn?) That night, as she's getting high in the cemetery with her fellow stoners, they deem her "it," sending her back to the car to re-start the music. I was sure she would come back to find her friends all dead, but kudos to The Vampire Diaries for taking the less-predictable route and having Damon kill her instead. Damon's back in my good books for offing not one, but two annoying characters this episode (three in total). Well done. Of course, the real tragedy is that Jeremy will now think Vicki stole the Gilbert family pocket watch, instead of realizing it was Logan (invited back to the house after his date with Jenna, who clearly wasn't that traumatized by him despite leaving town over his dastardly ways). But now that the watch has been acquired by the would-be hunters (explained in my last review), I guess we should all start worrying about Stefan (because we know they'll never catch Damon). By the way, it would have been nice if the show had drawn out the search for the watch a little more. Tension is generally a good thing in a television show. Maybe if they weren't so busy with ludicrous plotlines about skanky fundraisers...

The show ends with Stefan discovering Damon's dead crow (yup--the blood-starved vamp literally ate crow. Ha ha) and Zack. As he's dashing to find his better half, he opens the door and instead finds Elayna standing there. Yes, boys and girls: she's finally clued in that she's dating a vampire. And we're all waiting on tenterhooks to see how they'll resolve the latest crisis threatening their relationship. Aren't we just?

Mythology: Special rings protect Damon and Stefan from burning in the sun (Stefan's is made of Lapis lazuli). Vampires who don't feed become steadily weaker until they finally can't move; eventually they desiccate like a mummy, turning into a living corpse. Stefan claims to love garlic, so garlic apparently has no effect.

Elayna: (re: Stefan) What do we know about him, really?

Damon: You got the bad guy. Now nothing can come between you and Elayna. Except the truth.

Damon: Let me out of here, please.
Caroline: You bit me.
Damon: You liked it.

The Vampire Diaries, Season 1 Episode 5 "You're Undead to Me." Written by Sean Reycraft and Gabrielle G. Stanton. Directed by Kevin Bray. From The CW.
Posted by Aspasia B at 7:06 AM