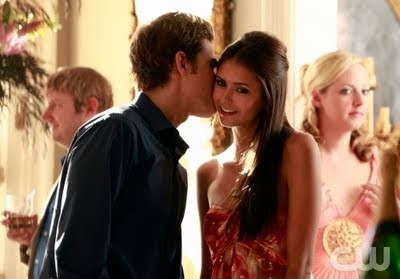 And the plot thickens. Not in any actual interesting way, mind you, but it is bloating up nicely. Like a corpse way past its 'bury-by' date.

"Family Ties" opens with one of the show's favourite plot devices: the fakeout dream. You know--where something terrifying and/or disturbing happens to a beloved character, shocking and appalling the viewer until it ultimately is revealed that it was a dream all along. Yeah, these have been used way too much already, and not used particularly well, at that. I wish I could say that I don't think we'll be seeing any more of them in future episodes.

From there it's on to the big news in Mystic Falls. Not only has the deadly animal responsible for all the recent deaths been caught (turns out it was a mountain lion), but the Founder's Party is coming up! The party, held by (and seemingly for) the town founders, is the biggest thing since the comet! Everyone's talking about it and everyone's going. Elena's even fulfilling her mother's promise to lend several family heirlooms for the event. The only thing she keeps back is the pocket watch that Jeremy feels particularly attached to, telling the mayor's bitchy wife that it is lost somewhere in the house (why she feels the need to lie is unclear. What is clear from the sudden prominence of the watch, is that we'll be hearing about it again soon).

Elena and Stefan continue their endless game of "I like you--hold on a second, no I don't. Oh wait, I do again. Maybe. Let's go out on a date!" That one never gets old. Actually, mostly Elena plays while Stefan looks hurt/confused and broody (can't really fault him for the confused). I'd also like to take a second to mention the lacklustre chemistry between Nina Dobrev and Paul Wesley. When they were dancing at the party, Nina/Elayna's back was almost bent double in an effort to keep her distance from Paul/Stefan.

Meanwhile, Bonnie's big contribution to the episode--besides pointless repetition of dialogue--is to remind us of her new witchy feelings by accidentally lighting a candle at the party... with her mind!

But there's plenty more going on at this party. After convincing Tyler--who turns out to be the mayor's son--to invite her, Vicki ends up spending the evening being treated like an embarrassment. Her lesser status is confirmed when Tyler's mom refers to her as trash (well yeah, she has a job... as a waitress! Horrors!), but not before Vicky finally stands up for herself and tells Tyler off. She then goes straight to her ex/stalker, Jeremy, and they happily fall into each other's arms. Kudos to The Vampire Diaries for teaching girls the valuable lesson that the right guy is the one who never gives up, even when you've repeatedly told him no. That's sarcasm, by the way.

Flaky Aunt Jenna makes an appearance and is confronted at the party by her ex, news reporter Logan, whose heinous past crimes (cheating) were so horrible they drove her out of town (really?) But being massively traumatized is still no match for persistence and charm ('but I've changed, baby'); Jenna eventually agrees to a lunch date with Logan. And once again we learn that all a woman really needs is a man to relentlessly pursue her, no matter what she says. "No" means keep trying! That's still sarcasm.

When Bonnie sees the mayor's wife being rude to the help because the candles haven't been lit, Bonnie lights them all... with her mind!

And throughout it all, Damon is Damon. He torments Stefan and Zack. He uses Caroline. He tells Elayna about the "first Salvatore brothers" who tried to save the woman they loved from a fire (deliberately set in a church to kill the Union sympathizers locked inside) and how the brothers were shot dead for their efforts. He also somehow managed to ensure the Founders Party wasn't cancelled (mentioned by him but not explained), simply so he could get inside and retrieve a "very important" crystal he'd left there at the last party he attended (which happened to be the inaugural party). He even apparently arranged so that vervain (a weed-like herb, by the way) would never grow in the town again. Sure thing. I initially liked Damon because he got the best lines and, go figure, actually behaved like a vampire. But his character is getting tiresome. When Spike (Buffy/Angel) smirks, it adds to his character and (I think) adds to his attraction; when Damon smirks (which he does constantly) he just looks like a bratty kid. And as for getting the best lines, I think he was too busy standing shirtless in front of a mirror, expounding on how great it is to spend eternity as a buff stud, to actually say anything of interest this episode.

Damon's smirk does finally get wiped off, though. After Caroline accidentally lets Elayna see the bite marks on her body (marks, by the way, which look like Damon's been gnawing on her rather than just piercing with fangs), Elayna confronts him and tells him to stay away from Caroline, or else. Damon then decides he's done with Caroline, sinking his fangs in with the intention of killing her. He immediately starts choking before doubling over in agony. Stefan, it turns out (although not unexpectedly), had the foresight to spike Caroline's drink with a double dose of vervain, rendering Damon helpless as soon as he injests her blood. Stefan then whisks Damon back to their house and locks him into the secret vervain grow-op room Zack had set up in the basement. Of course, we all know he'll be out of there by next episode, but Stefan seems confident that his work is done.

The show ends with the big twist. A select group of prominent townspeople (Caroline's mother/the sheriff, the mayor and his wife, reporter Logan) are sitting around discussing how to get the missing pocket watch from inside Elayna's house (Logan's pretty sure he can get in to retrieve it). It seems they'll need that watch because, with five bodies all drained of blood, it's official: "They're back."

Okay, a cabal of town elders know about the vampires and are planning a hunt. So why don't I care? Why am I completely uninterested in Elayna's relationship (or lack thereof) with Stefan? Why am I not worried about Damon getting out of that locked room? Why am I actually rooting for main characters to get killed? Why does this show bore me so very much?

Last time, I commented that the show needs to decide what it's going to be about. It would be nice if the sudden introduction of hunters was a signal that the vampires are about to take centre-stage. I have a really bad feeling, however, that it's just going to be an excuse to add lame adult melodrama to the already-rampant levels of lame teen melodrama. The first episode of The Vampire Diaries was just okay--definitely nothing great. Why, then, does it seem so vastly superior to all the subsequent episodes? Kevin Williamson, you've done it again.

Weaknesses: Vervain. Physical contact (Stefan seems to start vamping out every time he makes out with Elena. He'd better watch out or he might end up losing his soul altogether...)

Mythology: Rings protect them from burning in the sun.

Damon: (reading) What's so special about this Bella girl? Edward is so whipped.

Caroline: Are you going to kill me?
Damon: Mm-hm. But not yet.

Damon: (to Stefan) I'm not some drunk sorority chick. You can't roofie me.

The Vampire Diaries, Season 1 Episode 4 "Family Ties." Written by Andrew Kreisberg and Brian Young. Directed by Guy Ferland. From The CW.
Posted by Aspasia B at 1:59 PM