The Gates S1 E4 "The Monster Within" 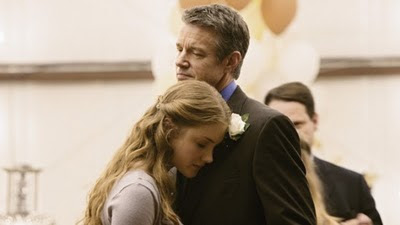 Two dead bodies, and one is actually courtesy of a vampire! The Gates is starting to get the hang of this paranormal thing...well, sort of.

"The Monster Within" starts off well enough, with another nighttime scene in the woods (again shot too dark) as the wolves are out running. Suddenly we notice a hunter and the next thing we know one of the wolves is shot and badly wounded. Of course the wolves are the local weres, and the wounded one is Lukas. Brett, meanwhile, overreacts and ends up killing the hunter. Promising, right? (Inner Monster Count: 1; although, the hunter might count for one too, if for no other reason than he was poaching.)

The tension over Lukas's well-being dissipates all-too-quickly as Coach Ross (fellow were and beta of the Pack) removes the bullets and tells Lukas he'll be fine with time. Of course, the teen wolves don't tell the Coach that they left a dead hunter back in the woods. Surely he'll never find out!

And then he finds out. Pretty much right away, actually. He secretly moves the body ten miles away (yet somehow forgets about forensic evidence) and then gives Brett a stern lecture about Pack rules. He won't tell the Council what Brett did (something to do with Brett's mother) but he does punish him: Brett is now off the high school football team...permanently. Um, yeah. Brett reacts with ultimate rebellion: going out running against the alpha's (Lukas, apparently) orders. Craziness.

I'm also confused about the whole alpha thing. Is Lukas alpha of the teens or alpha of the entire pack? Because his dad seems to be the boss of him, so how could Lukas be alpha? And if he's not leader of the entire pack, he wouldn't be leader of only part of it, right (I mean there's no such thing as co-alpha or junior alpha--at least, not anywhere outside The Gates).

Anyway, besides having to search for the missing hunter and then trying to make sense of the forensics and coroner's report, Chief Nick has a lot going on personally. Not only is it the day of the Gates' annual Daddy-Daughter Dance, but it's the one-year anniversary of his shooting the unarmed rape/murder suspect (an unfortunate mistake that got him fired from his last job). He swears to his wife that he's dealt with it and is fine to go to work. And it's almost believable. Unfortunately this show hasn't mastered the subtle art of, uh, subtlety yet so it's pretty obvious where this is going. Until then he "distracts" us all by griping about having to spend time with Dylan Radcliff at the dance.

Dylan isn't any happier about the situation, but what can he do--his daughter and wife are friends with Nick's daughter and wife. It's rough being a suburbanite. Of course, no one knows that better than Claire, who's grappling with her desire to be a good wife and mother versus her desire to be true to herself (Inner Monster Count: 2). She ultimately gives in to the latter, meeting with Christian while Dylan is busy at the dance. But when Christian is about to pick up The Gates' biggest gossip for dinner, Claire not only steps in ('I can't let you kill her--I know her') but she steps in it. Now the entire town is going to know she was out with another man. Horrors.

Speaking of forbidden love (okay, I wasn't really but I am now), things are progressing nicely with Charlie and Andie. That is, until ten seconds of kissing causes Charlie to pass out. The witch-doctor realizes the fainting spell is down to Andie's emerging succubus powers (sigh, and also Inner Monster Count: 3) but she tells Charlie he has mono. Then she reminds Andie's dad that it's time for The Talk. So after spending one last moment with his "little girl" (at the dance), Dad finally steps up and gets to telling her what she is and what it means. Too bad we don't actually get to hear any of it.

On to the much-anticipated dance. Marcus is at work (he's covering Nick's shift) so he and Teresa chat on the phone before she leaves for the dance as official volunteer photographer of the event. Only, something's up. Teresa breaks out in tears when Marcus tells her he likes having her around, and then she goes over the top thanking him for being so nice to her after she's had such a "rough year." Once they hang up, out comes a gun.

Meanwhile, just before leaving for the night Nick decides to admit to his wife that he's been lying all along. It turns out he didn't shoot the guy in self-defence, that he knew he wasn't armed. It was cold-blooded murder. See, the guy was going to walk, and Nick knew he did what he was accused of (with all the psychic cops in TV land, you wonder why anyone would ever need trials or judges). So, yeah, he feels really bad about what he did and about lying all those months but he's got to get going. Try to not be completely traumatized, honey! (Inner Monster Count: 4.)

At the dance itself Nick and Dylan finally get over their awkwardness and bond over fatherhood, talking about how they would do anything to keep their families safe. During a break Nick calls home and is relieved to find out his wife not only still loves him, but promises that they'll move past this. But it's not so easy for everyone to move on. Claiming that Marcus is outside and has a question for Nick, Teresa gets him to follow her to the parking lot. She then pulls the gun on him and announces her real name is Amanda Walcott--sister of the man Nick killed (I almost expect her to pull off the mask she's been wearing and reveal her true face too). She herds Nick into the woods and tells him she was going to kill his entire family first, but the dance proved to be too good an opportunity to catch him off his guard. But as soon as she's done with him she's going back for his daughter (and the son and wife too, presumably). (Inner Monster Count: 5.)

Finished with her monologue, Teresa/Amanda is about to pull the trigger when lo and behold, someone jumps on her and pulls her down. Surprise, surprise--it's Dylan, and he's finally unleashing the vampire within (Inner Monster Count: 6). Once the woman is dead he tells Nick to go get their daughters and take them home--he'll take care of the body; no one ever needs to know what happened. Nick is somewhat shaken, to say the least. The episode ends with Dylan's official moment of coming out. Well, you know, those ten-minute-long bonds are the ones that really matter.

So, it was another fairly mediocre episode punctuated with a few moments (and I mean moments) of decent action. Maybe things will pick up now that Nick knows the monsters don't only reside within.

Claire: It wouldn't be such a terrible idea for you to spend some time with Nick.
Dylan: Well, I don't know what we're going to talk about; I don't think I'm currently a suspect in any of his cases.
Claire: The day is young.

Claire: I know that it's wrong but when I'm with you, Christian, I feel like my old self again.
Christian: I like the old Claire.
Claire: Yeah. I do too.

Nick: What are you?
Dylan: You know exactly what I am.

The Gates, Season 1 Episode 4 "The Monster Within." Written by Gabrielle G. Stanton. Directed by Paul A. Edwards. From ABC.
Posted by Aspasia B at 7:15 PM