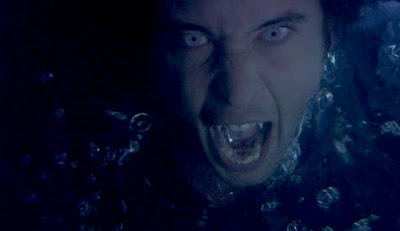 Have you ever been desperately in love with someone; someone you knew was bad for you but you just can't seem to stay away or let them go? Have you ever loved someone until the emotion infests you like a disease, eats away at you, and leaves you helpless before it? Mick has. And not with Beth. Love really does suck.

"The Ringer" starts off with a fire at a downtown hotel--one Mick used to go to with his parents for Sunday brunch. After chatting about it with Beth (who is at the scene reporting) Mick spots a woman taking photos in the crowd. He freezes. The woman looks exactly like his dead vampire ex-wife/maker, Coraline. Did I mention he killed Coraline by setting a building ablaze with her in it?

After a flashback in which we witness the first time Mick and Coraline meet (back in the 1950s when he was a mere Hawaiian-shirted mortal musician, a look and occupation that I just don't buy on Mick). Back in the present, Mick confronts the woman only to find out (a) she's human; (b) her name is Morgan; (c) she has no idea what he's talking about; and (d) she and Beth work together (Beth uses her photos for stories).

And yet, Mick can't shake the feeling that Coraline has somehow returned from the dead and made herself human. There are just too many coincidences to ignore, starting with the photo Morgan snapped of a woman (bearing a resemblance to her) being murdered in the fire by a man bearing a resemblance to Mick. The woman in the fire even has a fleur-de-lys tattoo on her back, just like Coraline did. Not to mention that Morgan moves and talks just like Coraline, that she has a copy of Coraline's favourite book by her bed, and that she happens to play one of Mick's favourite songs when he's at her place.

Josef is rightly skeptical. He admits that she is Coraline's doppelganger but Morgan is clearly human--not even Coraline could pull that off. And Mick clearly can't let go of his ex. Meanwhile Beth is showing signs of jealousy as it becomes clear there's some sort of connection between Mick and Morgan. (On a side note, this show really has the men hapless in the face of evil vamp women. Love not only sucks, it bites too).

Finally it all gets to be too much for Mick. In a moment of crazy he accosts Morgan, rambling on as if she is Coraline, and ripping her shirt to get a look at Coraline's telltale tattoo. But when he sees there is no tattoo and realizes that Morgan is bleeding but not healing, he finally backs down. Apparently he can believe his ex was resurrected and that she somehow cured herself of being a vampire, but the idea of tattoo removal is beyond his scope of believability. Back at his place Mick finally tells Beth what's been going on, how Morgan looks just like Coraline, how Coraline died, how insanely in love with Coraline he was (emphasis on insane). When Beth asks if he's disappointed that Morgan isn't Coraline, Mick can't answer. Beth's look before she walks away is part pain and part disgust. Mick just looks dismayed.

The episode ends with Morgan at her place as she breaks out the makeup remover and uncovers the fleur-de-lys on her back. Cue dramatic music.

There were a couple of nice moments in "The Ringer." The nighttime shot in the columbarium (yeah, I had to look it up) as Mick walks through was gorgeous (although why a vampire would need a flashlight to see in the dark is something of a mystery). There's also a great shot of flames (from the fireplace behind him) surrounding Mick as he talks about his feelings for Coraline. The fight scene at the cemetery is also pretty cool.

Moonlight isn't the first vampire show to feature a vamp who's managed to revert to the mortal coil (Angel and Forever Knight leap immediately to mind) but I'll be interested to see its take on the subject. And even more interested to see how Mick and Beth deal with it.

Mythology: To be absolutely sure a vampire is dead you need to see their ashes.

Musician: (re: Coraline) She's something else, isn't she?
Mick: Yeah, I wouldn't kick her out of bed for eating crackers.

Josef: (to Mick) Coraline drove you crazy the whole time you knew her. Now she's dead and she's still driving you crazy. You need to let her go.

Morgan: (questioning Beth about her relationship with Mick) I'm a photographer--I see things.
Beth: And I have a boyfriend, remember.
Morgan: Like that ever stopped anybody.

Josef: (to Mick) One of these days you're going to have to stop hating what you are.

Moonlight, Season 1 Episode 7 "The Ringer." Written by Josh Pate. Directed by Chris Fisher. From CBS/The CW.
Posted by Aspasia B at 2:58 PM