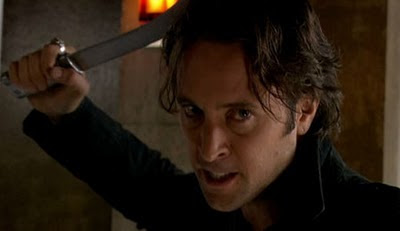 I didn't love "12:04 AM" and I don't know why. There were decent fight scenes, good use of music, an amusing (if not entirely believable) bit in a confessional, nice moments between Mick and Beth, no sign of Coraline, and on top of it all, a creepy Manson-like murderer who just won't die (by the way, for the younglings out there--that's Charles Manson, not Marilyn. And if you're too young to know who Marilyn Manson is, I don't want to know about it). All the elements for a damn fine episode. And yet it didn't click. Not for me anyway.

The episode starts off well, with Mick removing embedded bullets from his body (the downside of super quick healing) and dropping the latest addition into a jar full of previously removed bullets. As he works he watches Beth's latest report on BuzzWire.

Our Manson-esque killer, Donovan Shepherd (played by Gideon Emery, who also played Vlad the Impaler in The Middleman), is about to be executed for brutally killing six people 14 years earlier. He was convicted on the testimony of a 10-year-old girl (Audrey, played by Sarah Foret--a Katie Holmes lookalike--Beautiful People), who watched him murder those people, including her parents, and is there now to witness the execution. Meanwhile, Donovan's insanely devoted followers (his "family") are protesting outside and being generally threatening. Beth instantly bonds with Audrey over their mutually traumatic childhood experiences.

After some unnecessary Christ-like imagery, Shepherd (the name is included in said imagery) unleashes his final vitriol, telling the assembled witnesses that he regrets nothing, that he seeks the blood of those who crossed him, and that he'll live on while they die screaming his name. Nice. Audrey is further traumatized, while Beth inexplicably repeats his last words on air to the exultation of his gathered followers. This scene isn't believable and it also makes Beth seem like an irresponsible jerk. This might have something to do with why I'm not a fan of the episode.

From there things get weird as Audrey starts being stalked by someone who may or may not be Shepherd. Meanwhile bodies start piling up and she and Beth could be next. While Mick investigates the situation, Beth discovers that he was her rescuer and "guardian angel" not just when she was four, but ever since as well. The only thing that's not resolved by the end of the episode is Beth and Mick's relationship.

As I mentioned there are a few nice moments between Beth and Mick. Before she realizes he was her rescuer she tells him that it's ironic that Shepherd has been in prison yet Audrey never felt safe, while Beth's kidnapper was never found but she's always felt safe. His reaction is subtle, but you can tell he likes hearing that.

The way Beth glows just a little bit whenever anyone asks whether there's anything between her and Mick (which they always do), even as she denies it. And the way she nods in complete agreement when Audrey admits she feels safe with Mick. Did I mention she even smells Mick's sweater blissfully while he's out?

Meanwhile, when Mick realizes Audrey and Beth are in immediate danger, his first (and apparently only) thought is of Beth.

And then the final scene when Beth approaches Mick and tells him she knows he's been watching over her. He seems chagrined but she's shedding tears of happiness because she's found her guardian angel. He claims that now she knows why things can never work between them (I'm not quite sure how he figures that), and she responds that since she's met him she's learned that anything is possible. As dawn breaks over the horizon, she kisses him. But, rather than respond, he skulks away, shielding himself from the sun and leaving her basking in it.

Now that I'm thinking about it, I think what really bothers me about this episode is the lack of subtlety. Everything is so obvious, and just in case you don't get it it's spelled out for you. Maybe I'm being too critical, maybe they were having an off day. I'm just going to try to focus on all the good (even great) aspects of the episode and the show. Even the undead need to be cut some slack once in a while.

Strengths: Fast healing. Bullets and shrapnel are not an issue and can be left inside a vampire's body, which usually heals before they can be removed (but try getting through a metal detector). Super speed and strength. Heightened sense of smell. Vampires' visual comprehension is "off the charts." Ability to jump great heights.

Mythology: Vampires don't need an invitation to enter a home. Vampires can detect multiple scents in blood, including the smell of emotions.

Donovan Shepherd (to Audrey): Hello, sweetheart; I see you.

Mick: I thought about being an actor back in the 70s. But I think I just really wanted to be Steve McQueen. There is a difference.

Priest: Who are you?
Mick: I'm the one who wants a confession.