Dead to the World by Charlaine Harris 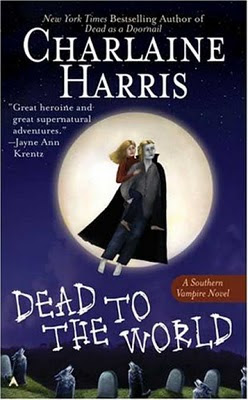 There are a few things in life that are always a nice surprise: a letter from a friend, a gift of flowers, the toy inside a Kinder egg--and discovering that something you initially weren't too fond of is worth liking after all. After hating the last two Sookie Stackhouse books I was pleasantly surprised to find that Dead to the World isn't bad. Nope, it ain't too bad at all.

Not that it's all flowers and Kinder eggs, either, but we'll get to that in a bit. First, the good stuff.

Hopefully most of us wouldn't stop in the middle of the night to pick up a near-naked strange man by the side of the road. So, of course, that's exactly what Sookie does as she's driving home from Merlotte's after work. Luckily the strange man is Eric, although he's not quite himself. It turns out he was cursed by witches and has forgotten who he is (although somehow he still knows he's a vampire). Witches who also happen to be weres with a taste for vampire blood, to be specific, and now they're out hunting for him. Some convoluted exposition later and Sookie is hired (with quite the salary) to keep Eric safe at her place until the witches can be found and dealt with. Meanwhile Sookie also has her hands full with ongoing trouble from Debbie Pelt, dead and wounded Shreveport weres, her not-entirely resolved feelings for Bill (conveniently off in Peru for most of the book), the unexpected attentions of a local were, an unusual "Supe" named Claudine, and--oh yeah--the disappearance of her brother, Jason. She's got a lot going on for a small-town girl with a limited social circle.

*There's a touch less exposition in this book than in the previous ones--always a plus. Also, Harris seems to be cutting down on the mundane details (I don't think she mentioned anyone's socks once this time! Although the clothes are still tragic).
*Eric with memory loss is pretty likable. Eric with memory loss hooking up with Sookie, well, that's just a bit of gravy (apparently he's a Viking in the sack--ha ha).
*There's some actual tension in the story!
*Sookie's horrible perma-smile seems to be slowly fading away.
*There are some good descriptive bits (mostly around the magic used). The books could use more of that.
*It's an interesting plot device to have the love interest (sex interest?) temporarily lose his memory so the heroine can hook up with him without any boring long-term commitment.
*Bubba is actually kind of growing on me. I have no idea how this happened.
*Bonus points for mentioning Buffy and Angel, although describing receiving the first season of Buffy as a "gag gift" is not cool.

*There's still too much exposition and mundane detail.
*The resolution with Eric is kind of sad.
*The battle with the bad guys was seriously anti-climactic (although it occurred to me that these aren't the sort of climaxes romance readers are necessarily interested in anyway).
*I was hoping the Jason storyline would be stretched into the next book, but it ends up resolved (also anticlimactically).
*The Wiccan bits sound like Harris is summarizing Wicca for Dummies. And she still manages to sound slightly insulting/condescending toward Wiccans and witches.
*Ongoing editing issues, e.g. "Bon Temp's." Also this line: "They're Wiccans. They're evil," probably was supposed to read "They're Wiccans. They're not evil." At least, I hope so (although I kind of wonder if that might not have been a Freudian slip on Harris's part).
*I think somebody pointed out certain plot holes to Harris and she scrambled to "fix" them in this book. Suddenly (and clumsily) we're told that Bubba can enter without an invitation because he's brain damaged and so doesn't really register as a vampire. So, can he also withstand sunlight? Can he eat real food? Can Sookie hear his thoughts? Vampires, as described in the books, are creatures of magic--what do brain patterns have to do with anything? Lame, lame, lame.

*There's an Italian character nicknamed "Dago" and not a thing is mentioned about it. Um...
*Harris seems to have an underlying belief that anyone who isn't Christian couldn't possibly be moral or inherently good.

Okay, so Dead to the World is not without its problems. But there's a tiny glimmer of hope that Harris is catching on and slowly improving. I'm looking forward to the next book, but in a reserved sort of way. Because there's nothing more disappointing than when something you've just started liking suddenly goes downhill.

Appearance: Very pale humans with long fangs that extend or retract at will (or when a vampire gets excited). Some vampires have glowing eyes. Vamps also have glowing skin, which apparently only Sookie can see.

Strengths: Super strength, speed. Fast healing. Can take a bullet without any lasting damage. Some can fly.

Weaknesses: Sunlight/daytime, stakes. Because they're creatures of magic they're susceptible to magic used against them. They're vulnerable to being drained by V addicts and dealers (and if the vamp isn't killed it takes years for them to recover from a draining).

Mythology: When a vampire's maker calls they must respond. They need an invitation into a private residence, and must immediately leave if the invitation is verbally rescinded. Vampires are creatures of magic (except when they're not, apparently) and are susceptible to magic worked on them.

"Draining was a hazardous job, of course. Sometimes the vampire got loose, with a very predictable result. A court in Florida had ruled this vampire retaliation justifiable homicide..."

Dead to the World by Charlaine Harris. From Penguin (Ace Books).
Posted by Aspasia B at 5:44 PM