Angel After the Fall--Epilogue (Issue #23) 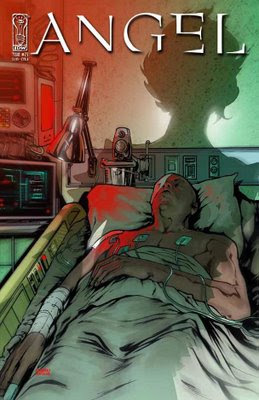 First, I have to apologize for reviewing out of order. Ideally, I shouldn't review Issue #23 of Angel After the Fall until I've reviewed issues 1 through 22 (and probably the TV series as well). But this blog was late in coming and now I'm behind, so in the hopes of staying at least somewhat on top of current releases, I guess I'll have to colour outside the lines a bit.

Second, there aren't actually any vampires in this issue. Well, Angel has minor cameos and Spike is mentioned (and the issue also has tie-ins with Spike: After the Fall, and Spike: Asylum), but other than that it's a vamp-free zone. There are, however, various and sundry lesser demons, Betta George, Illyria, and a T-Rex. And Gunn, naked. So all in all, we can't really complain.

I have to take a second to mention how much I love Illyria. I loved Fred too, and hate what happened to her, but Illyria is such an awesome character it's hard not to want more of her. Luckily, this issue is being spun into a five-part miniseries (Only Human) in August, so there'll be plenty of Illyria and Gunn action (but not that kind of action...probably...)

If you've already been reading AAtF, you'll want to keep going with this one. If you haven't and you're even a minor fan of the Buffyverse--what are you waiting for? The comic continues the Whedon hallmarks: great action, witty dialogue, solid storytelling, fantastic characters. Throw in some fine artwork and you're set.

Angel After the Fall--Epilogue, Issue #23; Art by Franco Urru and written by Brian Lynch. From IDW Publishing.
Posted by Aspasia B at 9:44 AM