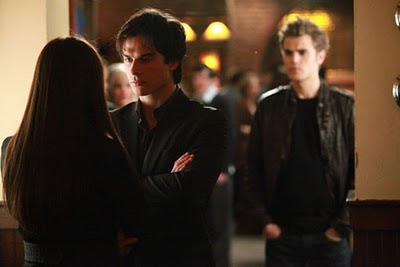 Thank the vampire gods for Damon! Between Stefan's complete lack of personality, Elayna's uselessness, and the generally annoying nature of most of the other characters, Damon is pretty much the only reason to watch this show (but at least he's a good reason). I believe I've said it before but I can't tell if Ian Somerhalder is a a really good actor, or if he just seems that way in comparison to the rest of the cast. In any case he shines, and I'd be surprised if anyone watching actually roots for the heroes of The Vampire Diaries. I know I'm not.

Mind you, it's not all bad. I rather enjoyed the introduction of Matt's drunken mom, Kelly, played by Melinda Clarke, who also played one of my favourite characters on Firefly, Nandi. (And for anyone keeping count, that's two Firefly alum now who have made appearances on TVD. Any chance Nathan Fillion or Jewel Staite are going to show up?) I especially liked Kelly when she told Caroline she could give sucking up to her a rest, adding that Caroline is completely fake like her Sheriff mom and, oh yeah, Kelly just doesn't like her. Of course, since pretty much every character I like on this show bites it, I doubt Kelly will last more than a few episodes.

So, "A Few Good Men" is bookended by a vampire named Harper (Sterling Sulieman, 24). We last saw him being revived by spilled blood in the tomb, and even though I was pretty sure the tomb was magically sealed to prevent vampires from getting out, he apparently didn't have any problems. At least he's a polite bloodsucker, apologizing to the helpful man in the woods before killing him and stealing his clothes. Actually, I kind of like Harper too.

I almost forgot to mention--Harper is out in the middle of the day with nary a mild sunburn. Apparently pretty much every vampire in Mystic Falls has a magical ring to protect them from the sun. Much like my complaint that's it's pointless for every human to have the supposedly uber-rare anti-vampire herb vervain, it's equally pointless for every vampire to be able to run around during daylight hours. When everybody's special, no one is. Besides, this just makes everything far too easy (read: boring) and, quite frankly, is some damn lazy writing.

Anyway, Elayna spends the episode seeking out information about her mysterious birth mother, Isobel. With the help of Jenna (and some truly, truly horrible product placement for Microsoft's Bing--do they think we don't notice?) and Stefan, Elayna finds out that Isobel: was a cheerleader, had a best friend named Trudy (whom Elayna goes to see), never admitted who the father was (Saltzman didn't even know she had a baby), and was killed by Damon. More on that in a bit.

Damon is dealing with Katherine's rejection the way any reasonable vampire would--with booze, blood, and sorority girls (it's okay--he's "reformed" now and doesn't want to kill them). Stefan (or as Damon calls him: "Buzzkill Bob") clumsily questions Damon about Alaric Saltzman's wife, Isobel (whom Stefan doesn't think could be the same Isobel as Elayna's mom because it's too much of a coincidence. If only...) Damon claims he doesn't remember her, even after being shown a photo. Meanwhile, Saltzman keeps creepily hanging out around Damon until Damon finally gets his biggest fan--the Sheriff--to do a check on Saltzman. When she reports back that Saltzman is from North Carolina, where his wife, Isobel, mysteriously disappeared, it finally clicks. Damon then decides to publicly and openly taunt Saltzman onstage during a charity bachelor "auction" (actually a raffle), claiming that his wife was "delicious." Way to keep a low profile, Damon! Not to mention that Elayna, all sweetness and sympathy toward Damon up until now, realizes as she watches the auction that he killed Isobel. She then angrily confronts him and lets him know that Saltzman's wife was her birth mother. He's clearly shocked and then upset with himself. Not exactly sure why Damon is so attached to Elayna. Could be all the "moments" they've been sharing lately, much to Stefan's barely noticeable chagrin (there's an especially nice one this episode, although it was based on the flimsiest of pretenses). I also noticed Damon is now calling Elayna "our" girlfriend.

Damon is also confronted by Saltzman back at the Salvatore mansion. I don't know why Saltzman thought he could take on a vampire with nothing but a stake, but the fight is short and brutal, with Damon taunting him even more viciously about his wife--and admitting that he turned Isobel after she begged him to--before using the stake against him. Damon then sits with a drink and coolly watches as Saltzman dies.

I know it was supposed to be a big revelation that Damon didn't actually kill Isobel, but please--it was so completely predictable, even before Saltzman mentioned in a previous episode that his wife's body was never found. I really love shows where all the plot twists either come completely out of left field (Elayna being adopted) or are so utterly obvious there's no surprise when they're finally revealed. There are many well-crafted television shows out there. The Vampire Diaries, however, is not one of them.

Meanwhile, after the auction Elayna and Stefan head outside where they run into the strange man Elayna saw outside of Trudy's house when she was leaving. It quickly becomes clear that the man is under a vampire's compulsion. He tells Elayna to stop looking and that "she" doesn't want to know Elayna. When Elayna says she understands, he steps in the path of an oncoming truck. Shocked at the possibility that her mother is still alive, Elayna takes advantage of the chaos at the scene and pockets dead weird guy's cellphone. Alone at home, she calls the last number that called the phone. A woman answers assuming it's the man, and asks him questions. When Elayna speaks up and asks if she's Isobel, the woman hangs up. So your vampire birth mother goes to a ridiculous amount of trouble to make sure you stay away from her and what's the first thing you do? Keep looking for her, of course! Then again, if Isobel hadn't bothered trying to keep Elayna away, Elayna would have believed Damon killed her and it all would have been over.

When Stefan finally returns home, he doesn't believe that Saltzman attacked Damon. But Damon doesn't care. Displaying the type of logic only someone stupidly in love can come up with, Damon has arrived at the conclusion that if Isobel was Elayna's mother, then Isobel must be related to Katherine, and so Katherine must have sent Isobel to him. There's no way it could be a coincidence! He leaves the room and Stefan shows more of his wide range of brooding skills. Suddenly Saltzman's hand twitches and the next thing we know he's alive again. Stefan is convinced he must have vampire blood in his system, but Saltzman claims it's something else. And then he realizes: it's the ring his wife gave him and made him promise to always wear! One: what is it with this show and magic rings? Two: Where do I get one?

At the end of the episode we see vampire Harper again as he approaches an isolated house. I'm not sure whether the mortal owner is compelled or is simply really into vampires, but Pearl and Anna are already there, along with another female vamp who presumably also escaped from the tomb. I guess they've got some revenge plan in the works. An entire group of pissed-off vampires let loose on Mystic Falls? Works for me. Too bad they can't go after the show's writers while they're at it.

Strengths: The power of compulsion. The ability to taunt mercilessly.

Weaknesses: Hunger, stakes, sunlight (for a couple of them, anyway).

Mythology: Vampires need an invitation to enter a private residence. Certain (most) vampires have magical rings that protect them from the sun.

Stefan: (trying to get Damon to remember Isobel) Think hard. It's important.
Damon: (leaning in and speaking softly) Nothing is important. Not anymore.

Elayna: So, I found out who my birth mother is.
Damon: Ech, who cares? (Elayna looks shocked.) She left you. She sucks.

Elayna to Damon after finding out he killed Isobel: Go ahead--reminisce about how you killed her.

Saltzman: You turned her [Isobel] because you liked her?
Damon: No, I slept with her because I liked her.

The Vampire Diaries, Season 1 Episode 15 "A Few Good Men." Written by Brian Young. Directed by Joshua Butler. From The CW.
Posted by Aspasia B at 4:54 PM