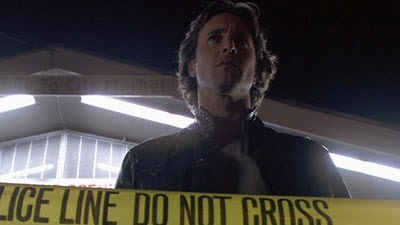 If you can get past the silly title, this is actually a rather good episode. In fact, I'm really starting to like this show--enough to hope that the CW picks it up and puts it back into production (or to be disappointed if they don't).

As Beth tries to come to term with the existence of vampires--not to mention that Mick is one of them, Mick tries to come to terms with the way he was sired (let's just say his wife took her wedding vows to love him forever very seriously). On top of all this they have to deal with a rogue vampire--one whose sire didn't stick around to teach him he's not supposed to go on killing sprees.

Mick's angst works particularly well since, unlike so many other tormented vampires, he's not really that old. You can believe he hasn't properly dealt with the trauma of finding out his new wife is undead as she's in the process of ensuring he joins the ranks. Not to mention that she's psychotic and delusional. Suddenly you'll think your ex doesn't seem so bad.

But one thing Mick's wife/sire, Coraline, did get right was teaching him how to be a vampire--how to survive and how to follow the rules. Which is more than Dr. Jeffrey Pollock gets when he stops to play Good Samaritan and ends up being accidentally turned. It doesn't take long for his uncontrolled hunger to become blood lust. Even though I wasn't expecting this storyline to be all that interesting, it actually works. Best crime subplot so far.

With Beth's help, Mick tracks down the unwitting sire and his bastard son. And he soon appreciates how handy it is to have a human ally around when you're paralyzed by a stake, even if she is on the squeamish side. When he finally confronts the rogue a nifty chase and fight scene ensue. I love that they utilize a few parkour moves, which works brilliantly within the context of vampires and makes the fight scene way more enjoyable to watch than it probably would have been otherwise. And let's face it--not all vampires can be martial arts experts.

I also love the way Mick ultimately deals with the rogue vampire. Given that the guy was an innocent victim himself when he was turned, I was expecting something a little more... sympathetic. Or maybe merciful. Like being taken under the wing of an older vamp and rehabilitated. Or maybe forced to do some community service (reading to elderly vampires?) Even Beth wants to punish him in a civilized manner. But Mick's solution is efficient and brutal. Just as it should be.

This episode also introduces us to a new character: The Cleaner (Molly Culver, Heist). Unfortunately IMDB tells me she's only in the one episode, but the concept is fantastic. Basically when things get out of hand (as they're occasionally bound to) and a vampire ends up with a corpse to deal with, The Cleaner is called. She and her crew take care of the situation. And a nice touch: Cleaner-vampire confidentiality, so no one will get persecuted for their mistakes (although I have the feeling that if she starts getting calls a little too often from the same vamp, she'll be taking care of something other than human corpses). Great idea--wish we could see more of it.

I also need to mention the nice camera work this episode, particularly the shot using the security mirror in a convenience store. Well done.

Other enjoyable moments: Mick was born in November--Scorpios represent! Also, Josef tells an interesting tale of two Buddhist monks--way to entertain and enlighten.

And of course, there's the high point of every episode--the interaction between Mick and Beth. The longing in Mick's eyes... it's some kind of beautiful pain. And he's obviously none too pleased about putting her in danger (or rather, not being able to stop her from putting herself in danger) when he's spent the last couple of decades trying to keep her safe. I like that the writers are taking it slow with the characters. I'm sure they had long-term plans for the relationship before the show got cancelled. But I love the tension in the brief moments of connection each episode, wondering where it'll all end up. TV relationships are hard to do well, but so far Moonlight is getting it just right.

Far too often absolute gems of television shows get cancelled, usually because their concentrated fan base isn't enough to get the ratings that the networks are so obsessed with. These shows stand out--the concept, storylines, writing, acting, directing, design--rising above the morass of cop/lawyer/doctor dramas, lame sitcoms, and desperately pathetic soap operas. There's a reason their fans won't let go, even years later. Sadly, it looks like Moonlight might have been one of those gems. Dommage.

Appearance: Human, until the vampire emerges, then ghostly white eyes and prominent, elegant fangs. Vampire blood "smells like nothing else."

Mythology: Vampires need to keep their existence a secret to avoid being hunted. Food tastes of nothing to vampires (and garlic doesn't bother them). A sire is supposed to take responsibility for the vampires they create; to teach them and keep them under control. Newly turned vampires are all rage and hunger, unaware of what they're doing. If a vampire goes rogue they won't stop killing. In order to turn a human, the human must be close to death and there needs to be an exchange of blood. Vampires do have reflections. Vampires sleep in cold places (fridges, freezers) at least in part because the cold feels good.

Mick: It's going to get dangerous, Beth.
Beth: Then it's a good thing I have you around.

Beth: Can you fly?
Mick: Uh-huh. Just like Superman.
Beth: Really?
Mick: No!

Mick: [Explaining to Beth how he was turned] I went to bed a happily married man and woke up a monster.