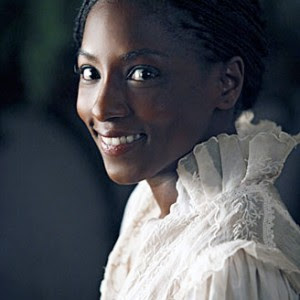 Things you learn in "Trouble" about vampires:
This episode starts off where the last one left off, with Tara and Franklin at the King's mansion. I have to say, I like Franklin a lot in this scene. Something about the way he's getting tetchy with Talbot really works for me. If it wasn't for his insanity, Franklin is definitely a vampire I'd want backing me up. Unfortunately, the insanity becomes ever-more obvious as the episode goes on. We find out from Russell (aka the King of Mississippi) that Franklin has kidnapped--and killed--women before (although Franklin claims Tara is "spectacularly different"), and that he once slaughtered a church group of elderly women (see point 3 above). With Tara he alternates between being possessive (insisting she's "his" to the other vamps), needy, childish, gallant, and downright psychotic. When he sees texts from Lafayette on Tara's phone he nearly kills her because he thinks Lafayette is her boyfriend. A moment later--content that Lafayette is just her cousin--he shows off his texting skills and then petulantly demands that Tara look at him when she doesn't pay sufficient attention. When Tara attempts a daylight escape (foiled by Coot in wolf form), Franklin is distraught, sobbing, wailing why, and basically losing it. Tara realizes that he's not only emotionally unstable, but he's incredibly attached to her (maybe even in love), so she starts playing him as a survival strategy. She tells him that she was wrong, that she's really into him, and that she's just afraid of the other vampires. Finally reassured of her feelings, Franklin decides to "propose" to Tara--he asks her to be his vampire bride. Hey, at least he's not afraid of commitment.

Surprisingly, back in Bon Temps, suddenly neither is Jason. For one thing he definitely wants to be a cop, even willing to put up with a day (!) of mind-numbing tedium (at one point he deals with his boredom by fingerprintsing himself). But even the news that he still needs to pass the written test to become a real cop doesn't seem to diminish his interest in a career change. On top of that he finally meets the mysterious girl he saw at the meth lab bust back in "Beautifully Broken." Despite Crystal's (yes, the girl from the meth bust is named Crystal) constant refrain that there's no future for her and Jason, he's already thinking she might just be Ms Forever. Is it true love? Does Crystal (played by Lindsay Pulsipher, The Beast) have access to emotion-manipulating magics? Guess we'll find out.

A surprising romance is also developing between Lafayette and his mother's orderly, Jesus Velasquez (played by Kevin Alejandro, Southland). At first when Jesus shows up at Merlotte's Lafayette is wary, but I guess after a guy sits around in a redneck bar for nine hours just for a chance to hang out with you after work, that makes an impression. I liked Jesus right away when we first saw him taking care of Lafayette's mother, so I'm glad we get to see a bit more of him.

On the less-romantic relationship side, Arlene still hasn't told Terry that her surprise pregnancy isn't his doing. Meanwhile Terry is moving in with her and is shedding tears of happiness to finally be getting a normal life.

In contrast, Jessica is down after seeing Hoyt come into Merlotte's with a date. Never mind that Hoyt seems more fixated on Jessica than on what's-her-name, or that the other girl is nowhere close to being any kind of competition for the teenage vamp (telling your date you can't wait to have babies is not exactly the path to romance). Her mood perks up a little, though, when Tommy (now working at Merlotte's as a busboy) gets flirty with her. Still, I can't help but feel that there's still hope for Hoyt and Jessica (and if they do get back together I hope she makes him change that hairstyle--I swear it makes him look like a bulldog).

But speaking of Tommy, Sam's got him and his parents ensconced in Dawn's old house. Tommy's working at the bar while Joe Lee is now the general handyman for Sam's various rental properties. Sounds pretty good, right? Come on, this is True Blood. Almost right away it's clear there's some weird vibe between Tommy and his dad. The situation gets progressively worse until Joe Lee finally shows up and gets into an altercation with Sam (shouting that he "owns" Tommy) while Tommy looks on, clearly frightened. Sam eventually defuses the situation, but it's not going to last. Meanwhile, Tommy refuses to tell Sam what the deal is with him and his father.

Back to Mississippi now: The last we saw of Sookie and Alcide, she was running for her life and he was in the process of shifting (along with a bar full of weres). It turns out Alcide managed to hang on to his humanity and he and Sookie escaped without incident. I believe the word you're looking for is anticlimactic (it only gets worse when you realize Sookie's nifty new hairstyle was, in fact, a wig). After everything he's witnessed, Alcide realizes he has to go to the werewolf Packmaster and tell him everything, and he reluctantly takes Sookie along. But the Packmaster already knows, and is terrified of Russell and his wolves. His plan is to let Russell do whatever he wants until he finally moves on. How did this guy get to be alpha?

Conveniently Eric shows up at Russell's mansion to ask permission to hunt for Bill in the King's territory. When he realizes that not only is Bill at the mansion, but that everybody already knows he's the one who was selling V back in Louisiana, Eric changes tactics. He admits that the Magister has his progeny (Pam) and that it's the Queen of Louisiana (Sophie-Anne) who got them all into this mess in the first place. Lucky for Eric, Russell has no love for the Magister and some sympathy for Eric's plight with Pam. He assures Eric that there might just be a way to solve all their problems--but first Eric has to spend the night and wait until Russell's ready to deal with his situation. Poor Pam.

Unable to do much else, Eric gets a tour of the mansion from Talbot (who's not shy about showing his attraction to Eric). Things are going as fine as can be expected when suddenly Eric sees an artifact in a case: a Viking crown. Through flashback we find out that Eric's parents (king and queen of the Vikings, apparently--or at least their particular clan) were slaughtered by werewolves following the orders of a mysterious hooded figure in the shadows. After Eric spots the brand on a dead were's neck, the figure takes the king's crown and leaves. His dying father appoints Eric the new king and also makes him swear vengeance. So now we know why Eric is so desperate to find out who the weres have been working for (although that is a long time to be out for revenge--talk about serving it cold), and he's finally discovered that it's Russell. I'm looking forward to seeing Eric fulfill that vow.

By the way, Eric as a human Viking--much more enjoyable to watch than him as a vampire, although even that has been improving. No more perpetually bored/emotionless characters, 'kay?

As for Bill, he's rapidly losing Russell's trust. It probably doesn't help that he lies about the file on Sookie Franklin found in his house not being his. It helps even less that, after acknowledging to Eric that Sookie is no longer his, Bill beats up Coot (destroying Elizabeth Bathory's bed in the process), shoves a vampire guard's face against the silver door (melty!), and takes off to warn Sookie to get out of town. Of course he was being set up by Russell, so his reunion with Sookie is short-lived. Russell, Coot, and the guard show up, but when Coot attacks and grabs Sookie, the purple-white light comes out of her hands again, this time strong enough to throw him across the room. Bill looks stunned when he sees this, but Russell laughs uproariously and shouts "Fantastic!" Things are all kinds of messed up for our heroes.

I don't know what it is but I'm not loving True Blood this season. I think it's probably partly due to pacing (too much trying to be done in too little time) and a general lack of relationship development (seriously, half the fun is in the build up and, unfortunately, the show is pretty consistent with relationships being over before they've really started). I'm sure I'll be back to being a devoted fan before too long, but for now there's more tarnish than gleam.

Appearance: Pale humans with red-rimmed eyes and snakelike fangs that descend or retract at will. Vampires cry blood.

Mythology: If a vampire claims a human as "theirs" other vampires cannot (by vampire law) drink from that human, hurt them, or use them in any way. Vampires need an invitation to enter a private residence, although it's unclear this episode whether any human (or were, apparently) can invite a vampire in or if it was a momentary lapse in the rule that a resident needs to issue the invitation.

Franklin: But I want cash.
Russell: The last time you had any real money you ended up at the slots in Biloxi slaughtering a church group of elderly women.
Franklin: They wouldn't let me have a turn!

Tara: We need to talk.
Franklin: Don't say that. When you say that everything goes black and I wake up surrounded by body parts.