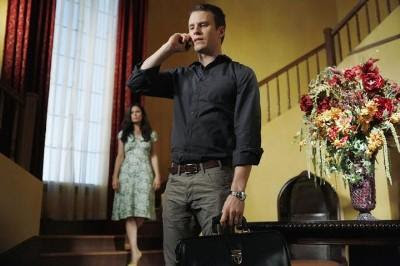 Well, you can't accuse The Gates of not being predictable. In "Identity Crisis"...

I wish I could say this episode isn't indicative of the rest of the series. I also wish I could win the Lotto Max jackpot. Guess which wish is more realistic. The Gates had so much promise and has just ended up being completely disappointing. Four episodes left. If only I actually cared...

Appearance: Human with sharp fangs that we hardly ever get to see. Dead vampires look like dead people.

Strengths: Super speed, strength. Quick healing. Not affected by being run through with a sword.

Mythology: Vampires have a bond with their makers, although it can be broken.

Ben (vampire): If it was up to me you wouldn't be involved in this but Dylan has convinced me that I need to let you attempt to save this woman's life.
Nick: You're gonna kill an FBI agent?
Ben: There are too many peoples' lives at stake here. If she gets that list before you do, well someone out there will make sure she never gets back to FBI headquarters alive.

Claire: I'm home... Don't you even want to know where I've been?
Dylan: What does it matter? For all I know you're lying to me.

Emily: Where are we going again?
Christian: Oh, don't you worry about it, pumpkin. This is going to be fun.

The Gates, Season 1 Episode 9 "Identity Crisis." Written by Scott Nimerfro. Directed by Steve Miner. From ABC.
Posted by Aspasia B at 11:12 PM