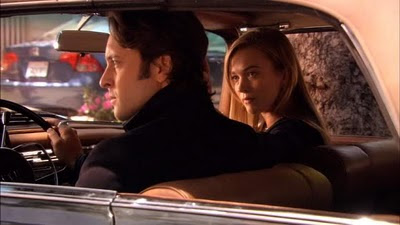 "What's Left Behind" features monsters, war, miracles, regrets, family, and a really nice Victorian house. And unlike the last couple of episodes (read more) it's not disappointing. In fact, I really liked it. And since the series is approaching the end, it's nice to see it concluding on at least one high note (and hopefully another one in the finale).

The episode starts at night with a frightened little boy lying awake in bed. He hears strange noises around him and it seems as though someone is creeping around in the hallway. The next thing we know the boy is grabbed out of his bed from above.

The next morning Beth meets with Ben (his request). Apparently the previous year she covered two similar kidnappings and Ben wants to use her expertise and fresh eyes to help in the investigation. Since the boys in the previous kidnappings were found dead within a week, finding this boy (Jacob) is imperative.

Mick, meanwhile, has spent a night out with Josef...window shopping for couches. (We shall never speak of this again.) On returning to Mick's place he is transfixed by the TV that's tuned to the kidnapped boy's father pleading for his return. The next day when Beth arrives at the crime scene, Mick is already there. It turns out he grew up in the neighbourhood.

Through flashback we find out that the house the boy lives in used to belong to Mick's best friend since childhood, Ray, and Ray's wife, Lilah. We also find out that Mick and Lilah betrayed Ray. So when Mick goes inside and sees a picture of Ray and Lilah he realizes that the kidnapped boy's father (Robert) is their son. Or is he? In the age of paternity melodrama (thank you, Maury Povich) my first thought was that Robert is more than likely actually Mick's son.

Mick has the same thought and even manages to scrounge up some pre-vampire DNA for a test. But that comes second to finding Jacob alive and well. He is possibly Mick's grandson, after all.

As he and Beth investigate the kidnapping he tells her about him and Lilah. It turns out that when they hooked up they both thought Ray had been dead for months (so not sure where Mick's sense of guilt is coming from). Mick left them both alone after Ray's miraculous return from the war, and he'd had no idea that Lilah was pregnant. But the fact that Ray was partially paralyzed and not expected to be able to father children, as well as the fact that Robert was born seven months after Ray's return definitely point to Mick being the baby daddy.

Meanwhile he and Beth have figured out who the kidnapper is. Unwilling to wait for a search warrant, Mick goes after the guy. The kidnapper is as creepy as you would expect, monologuing about his twisted philosophies. He then tries to shoot Mick. But when he sees that Mick is completely unaffected he tells him it's his fault that Jacob will die afraid and alone in the dark. And then he blows his brains out. Things are looking grim for Jacob--until Mick hears a faint heartbeat. It turns out psycho kidnapper bricked the poor kid up into a wall (is anyone else completely freaked out at the thought of that?) Mick breaks down the wall with his bare hands and saves the day.

Later, as Mick and Beth sit in his car outside Jacob's house, Beth hands him the results of his DNA test. For a second I thought Mick wouldn't even look but he does. He's not Robert's father. It turns out Robert really was a miracle baby for Ray and Lilah. Mick is happy for his friend but he never realized how much he wanted a family of his own.

As this is happening outside, inside the house Robert is astonished when Jacob points out Mick in an army picture on the wall. Robert (aware that Mick is just outside) grabs the photo off the wall and runs out as Mick is pulling away. As Robert watches Mick leave he drops the photo. On the back we see Mick's name written (you'd think he would've changed it in 60 years). But thinking about what must be going through Robert's mind gives me shivers. Ghost stories involving a dead person coming back long enough to help someone in trouble are my favourites, so this episode really appealed to me on that level. But the acting was also good, the emotion was real, the house was enviable, and the story compelling. Even though there was no real progression of Mick and Beth's relationship, I (surprisingly) didn't miss it. Overall "What's Left Behind" is an episode I would go back to and watch again, something I can't say about too many shows.

Strengths: Heightened sense of smell and hearing. Ability to see clearly in the dark.
Super strength. Ability to heal quickly. Not affected by being shot. Menacing growl.

Mythology: Vampires give off a distinctive odour of decay. Vampires love children's blood: it is purer than that of adults and some believe it tastes better. Vampire DNA is fundamentally changed from the original human DNA.

Mick: Should I be jealous of him?
Beth: Of course. Even if I have no romantic interest in him your jealousy makes me feel desirable.

Josef: I hope you get the kid back. Your last contribution to the human gene pool.
Mick: Yeah, I guess he is.
Josef: Unless you and Beth rewrite the rules of vampire love and figure out how to procreate-- [sees Beth] Hi, Beth. [stage whispers to Mick] Beth's here.

Beth: Family's not only about DNA.

Moonlight, Season 1 Episode 15 "What's Left Behind." Written by Jill Blotevogel. Directed by Chris Fisher. From CBS?The CW.
Posted by Aspasia B at 3:04 PM