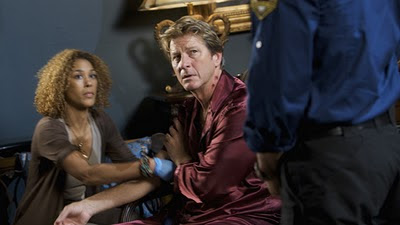 Hate crimes against vampires? What is The Gates coming to? Next thing you know witches will be working malevolent spells and werewolves will be stalking succubi. Oh, wait...

After being told about the more unusual aspects of The Gates (see last episode) Sarah's having a hard time accepting her new reality. But Nick is convinced they're surrounded by good people (even the ones who technically aren't people) and gets her to agree--albeit reluctantly--to give it more time. If only Nick knew what was coming he could have saved them all the trouble and just gone ahead and booked the movers.

The problem starts when Frank Buckley decides he's had enough of being human and asks vampire wife Vanessa to turn him after their anniversary party. Well, technically the problem started when Frank cheated on first wife Devon with Vanessa, but we'll get to that in a bit. Right now, though, Frank deciding to join the vamp ranks looks to the weres as though he's choosing sides. Alpha were Coach Ross lets Buckley know that he and his pack are not pleased, but Buckley, trusting fellow that he is, insists on following through with his plan.

No surprise that Devon is even less impressed than the weres when she hears that Frank is going to make an eternal commitment to wife number two. She breaks out all the nasty spell ingredients she's been collecting (vampire blood, werewolf eyes, facial peel remnants...) and then pays Sarah a visit. After pointing out that she's the only one who didn't lie to Sarah about The Gates' secrets and then hammering home the message that Sarah can trust her because she's also a "normal" human, Devon puts the whammy on Sarah, ordering her to have a chat with Frank and then conveniently forget all about it.

At the anniversary party (being held at Dylan and Claire's house--not really helping the whole 'choosing one side over another' theory), Ross and the other weres unexpectedly show up announcing that they're okay with Buckley choosing teams, after all. It's clearly a good night for vampire-werewolf relations as even Claire and Karen are getting along. Obviously it couldn't last. A pounding at the door reveals a heart staked to it with a note stating "Even vampires die." Frank still isn't deterred from wanting to be turned, convinced that the note is harmless (either he's really naive or The Gates is entirely populated by mischievous teens who are basically good kids).

After the party breaks up (the staked heart is pretty much everyone's cue to leave) and alone at last Vanessa finally gets ready to turn her husband. But as she starts drinking she suddenly begins choking. A moment later she's dead, having withered into a mummy-like corpse (something that Dylan later admits he's never seen and is not the way vampires usually go). After a lot of expository storytelling it turns out that Devon poisoned Frank's blood via a compelled Sarah. His blood will now kill any vampire exposed to it. Oh noes--and the weres are coming to get his blood so they can use it against the vampires (weren't they all friends a minute ago?) Frank still refuses to believe that anyone in The Gates would kill him. Then he kills himself (the vampire lead-medical examiner makes sure the body and its blood is completely destroyed). Meanwhile, Devon's gone into hiding and she could poison anyone else's blood again at any time, putting all the vampires in The Gates at serious risk. So the hunt for Devon is on. But as far as Nick's concerned it's time to grab the family and get the hell out of Dodge. I guess it was really only one good person keeping him there all along.

In other news, Brett's jealousy over Andie and Charlie finally gets the better of him when he finds out that Andie's taking medication that allows her to harmlessly act on all her succubus urges. Of course, this happens right after Andie and Charlie declare their love for each other and Charlie expresses his deep fear of losing Andie. What could possibly go wrong?

As The Gates nears its conclusion it's heartening to see that it seems to be tying up loose ends (nothing worse than an incomplete story). I'm sure the bad guys will be caught and punished, the good guys will find another reason to hang in there, and true love will prevail. Of course, there's always a chance we could be surprised. But I somehow doubt it.

Appearance: Human with sharp fangs that descend and retract at will.

Strengths: Strong emotional bonds with one another.

Claire: [to Sarah] Well, if I told you the truth the first day we met do you honestly think you would have believed me?
Karen: And, after all, it's not the kind of thing you open a conversation with. 'Pleased to meet you--I'm Karen and occasionally I transform into a wolf.'
Claire: I suppose what she's trying to say is that... now you know what we are; try not to forget who we are.

Brett: What's the point of having teeth if you never use them?

The Gates, Season 1 Episode 12 "Bad Moon Rising." Written by Richard Hatem and Jared Romero. Directed by Arthur Albert. From ABC.
Posted by Aspasia B at 2:09 PM