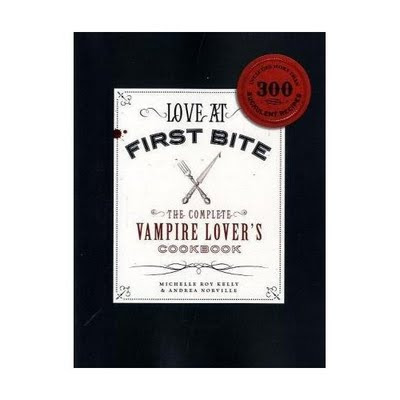 It seems strange to base a cookbook on vampires. Of all the things that we associate with creatures of the night, food is not one of them (at least, not the kind you'd find in a cookbook). The most interest a vampire might have in a human's diet would be to know whether it was heavy on the garlic, and as a vampire lover I sure as hell don't want to partake in the typical vamp's meal plan. Reading Love at First Bite: The Complete Vampire Lover's Cookbook and trying out a few of the recipes didn't make it seem any less strange. But I do have to admit that Gran Stackhouse does make a mean pecan pie.

Ultimately the book is more horror oriented than vampire specific. This struck me as a little lazy, as did the editing. Mistakes like "palette" instead of "palate" (p 1!) are sloppy but overlooked easily enough. In this context, however, calling the band "The" Bauhaus (p 105) and spelling Bela Lugosi's name "Legosi" (p 219) are unforgivable. These mistakes also make me think the authors are cashing in on a trend rather than having any real interest in the subject matter. Maybe it's a little high school of me but I can't seem to get the word "poser" out of my mind.

Other issues I have with the book include the eye-rolling-inducing puns and turns of phrase. The appetizers chapter is titled "Bits and Bites: Appetizers to Leave Them Screaming"; the salad chapter is "Salacious Salads: Grotesque Greens for Every Occasion"; the sandwich chapter is "Seductive Sandwiches: A Handful of Horror"...it goes on. The worst part is that the recipes barely even relate to the chapter titles. If there was a "seductive" sandwich or "salacious" salad in the bunch I didn't see it. Recipe titles are often even more confusing. How did "Corpulent Crudite" make the short list? Or "Foul Fowl Soup"? Not exactly inspiring images of fanged fiends in the shadows. And as I point out in my Heroes & Heartbreakers post on this book, Love at First Bite frequently misses the mark. Fruit bats get a shout-out but not the Salvatores. Spike gets a sweet potato recipe named after him but there's no mention of spicy buffalo wings or blooming onions. Again, I'm left wondering what the authors' motivation was.

Not that the book was all bad. It's nicely designed with good graphics and nice fonts. The "Tasty Tidbits" trivia found throughout are pretty good (the best part of the book, IMO). There's plenty of inspiration for horror-themed parties and dinners. Oh yeah, and there's recipes too. Due to various constraints beyond my control (including difficulty finding some of the ingredients) I ended up trying only three of the recipes. One (Blood Bowl, p 47) was mediocre at best. The other two (Blood Oranges & My Darling Clementines, p 10 and the aforementioned Stackhouse Pecan Pie, p 220) showed that the authors at least seem to know their culinary stuff. I would (and will) go back to this book in future to try out more recipes.

So should you get Love at First Bite? If you're looking for horror-theme party ideas, love cooking, or obsessively feel the need to collect all things vampire related, I say go for it. At worst you'll have some fun, get to eat something tasty, and have an unusual addition to your collection. But if you're expecting a truly complete vampire resource, you'll have to keep looking.

Email ThisBlogThis!Share to TwitterShare to FacebookShare to Pinterest
Labels: books. Heroes and Heartbreakers