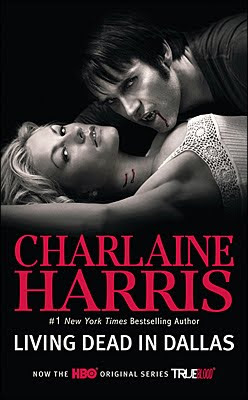 I can't believe it's been an entire week since I last posted. Unfortunately the day job required all my attention these past few days. But have no fear--I'll be catching up now. Keep an eye out for posts on Moonlight, The Gates, and, of course, True Blood. But first...

So Living Dead in Dallas is where True Blood and the Sookie Stackhouse books start diverging (although not quite as much as I expected). You'll recognize the characters and even some of the storylines, but unfortunately the books are a pale imitation of the show. Really unfortunate, in fact, since the books came first! Is it just me or have movies and TV shows become better than the books in the last few years? And as a lifelong reading addict, that's saying something coming from me. But I digress.

Living Dead in Dallas bears a passing resemblance to Season 2 of True Blood. There's a trip to Dallas to look for a missing vampire, a crazy vampire-hating "church," and a maenad. But the differences between the two are almost entirely in favour of the show. I think the books are really only for the hardcore Sookie and Eric fans. Everyone else will just be disappointed.

After going on a bender, Andy Bellefleur's car remains in the Merlotte's parking lot all night. The next morning when Sookie shows up for work she discovers a body in the car. The good: there's much less silly screaming in the book than there is in the show. The bad: the body belongs to Lafayette. At least he lives on in the show. The murder sets Sookie reluctantly off on a hunt for the real killer (until then, Andy is the main suspect).

But before she can deal with that, Sookie is obligated to go to Dallas (she's "rented out" by Eric to the Dallas vamps who need her telepathic abilities) to look for a missing vampire (not Godric, although he does make a disturbing appearance). There's also a sub-plot about the maenad.

I have a few problems with the book--mainly that it's dull. Harris tends to go on about the most tedious, irrelevant details (often involving the tragic clothing everyone seems to wear). There's too much exposition, particularly in the dialogue (show, don't tell!) And just when things look like they're starting to get interesting... they're resolved... in the laziest manner imaginable. I know people love, love, love Charlaine Harris's work, but this is a woman who has no concept of building tension (except possibly between Sookie and Eric). We all know Sookie won't be killed off, but at least make us believe she's in real danger. And you know when an orgy scene makes you yawn, there's something wrong with the writing. Never mind that the most fantastic creatures (vampires, weres, telepaths, shifters...) are consistently put into completely mundane situations. Why?

There also seems to be a fair amount of racism, sexism, homophobia, religious intolerance, and vampire-phobia in the books that is taken for granted. In the show it's at least questioned, if not portrayed as outright negative. In the books, for the most part, it just is. I have no doubt this is a reflection of the way things are in the South, but it further puts me off the books. As does Sookie herself; there's only so many fake grins, self-righteousness, and plain ignorance I can put up with in a character before I start actively despising them. Constantly telling us how hot and smart and "well-read" she is doesn't make up for it. The utter lack of character development doesn't help, either (learning to use a pay phone does not count).

I also really need to start compiling a list of cheesy sex-euphemisms from romance novels. My favourite this time: "We reached the end of the tunnel." *Snort* By the way, why do silly euphemisms need to be used for body parts ("manhood") but the phrase "ball a vampire" is okay? Who makes up these rules?

And it wouldn't be one of my reviews without a mention of the editing, which is just as bad this time as it was in the last book. Check out page 119 for the amazing gender-switching cop and reporter! Also, you'd think somebody would have caught that someone named "Chow" would not be part of the Yakuza (one is Japanese, one isn't--or maybe it's just reflective of the racism I already mentioned; what's the difference--it's all Asian, right?)

But I think the biggest reason I'm starting to really dislike the Sookie Stackhouse books is that Charlaine Harris clearly has no love for vampires or the people who are into them. I believe I already touched on some of the anti-vampire sentiments in my review of the last book. The generally negative outlook toward vampires continues here, as well as some newly expressed derision toward people obsessed with vampires, who apparently are "pathetic" (pg 86). Oh really? If Harris doesn't like vampires, or the people who do, why is she writing these books? Quite frankly, I'd rather give my money to authors (and moviemakers, musicians, artists...) who actually have love for what they're creating. If they don't even believe in what they're doing, why should we?

My instant adoration of the show left me eager to read the books on which it's based. Unfortunately, they're turning out to be a huge disappointment (not to mention, on occasion, downright insulting). In a perfect world, books wouldn't get published unless they were actually worth reading. In this world, you can at least save your money for something more worthwhile.

Appearance: Pale humans with glistening white fangs that descend or retract at will (particularly when vampires are excited). A vampire who's recently fed looks pinker. Some vampires have glowing eyes. Vampires cry bloody tears.

Strengths: Super strength, speed. Some vampires can communicate telepathically with other vampires. Ability to glamour (hypnotize) humans. There is a connection between vampires and humans who have consumed their blood.

Weaknesses: Sunlight, garlic, the need to sleep in coffins even in windowless rooms.

Mythology: In the books, vampires have "equal rights" (mainly because Congress figured out they could make them pay taxes if that was the case), but they still can't legally be married. Synthetic blood in the books is called "True Blood." Vampires won't allow themselves to be examined by doctors, and they won't let themselves be pressed into military service; in exchange all vampire doctors and nurses were asked to retire. No one (except the vampires) really knows what causes vampirism: the theory this time around is an extreme multiple-allergic reaction. Some vampires are "renouncers"--self-haters who team up with radical humans who help them commit suicide while making a point about how evil they are.

There are also rogue vampires. They never wanted to come out of the coffin, refuse to drink synthetic blood, and want to return to secrecy and invisibility. They're willing to openly slaughter humans, simply to force vampires back into hiding.

"Portia ain't as tough as everyone thinks she is," Terry told me [Sookie]. "You, on the other hand, are a sweet little eclair on the outside and a pit bull on the inside."

Sookie: What's on the agenda for tonight? Business or pleasure?
Bill: Being with you is always a pleasure.

Eric: Angelic Sookie, vision of love and beauty, I am prostrate that the wicked, evil maenad violated your smooth and voluptuous body, in an attempt to deliver a message to me.

Living Dead in Dallas by Charlaine Harris. From Penguin (Ace Books).
Posted by Aspasia B at 11:30 AM