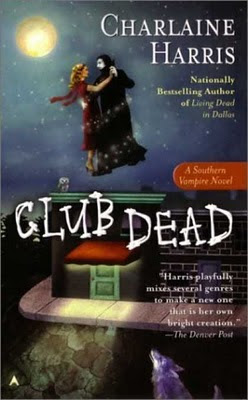 I don't get people. This is nothing new; I've often had trouble understanding why people do the things they do. Lately I'm suffering a lot of consternation trying to figure out why people like the things they like. The Sookie Stackhouse novels, for example. I'm trying to figure out how they can be bestsellers when the characters range between pointless and annoying, the editing is nonexistent, the mysteries are lame, and the writing sucks worse than a hungry vampire. I have to question whether maybe I'm being too hard on these books, whether maybe I should cut them some slack in light of the genre. But no--I've read numerous paranormal/suspense/romance type novels that are actually very good, with interesting characters, decent writing, and actual plots. Maybe it's the appeal of Eric that's got everyone so into these books; I know that sometimes one good character can overcome a lot of flaws. The thing is--I don't think Eric is that good. I mean, he's okay, but there are plenty of other books out there with equally good, if not better, characters. So what's the appeal?

In an attempt to figure it out, I've managed to come up with a list of ten reasons to love (or at least enjoy) the Sookie Stackhouse novels. Maybe the explanation rests somewhere within them.

1. If you've ever wondered what Elvis would be like undead, these books are for you.
2. Reading the books is like reliving the 80s, only with internet.
3. Club Dead (and likely the next books, as well) gives you a chance to swap teams Edward and Jacob for teams Eric and Alcide
4. No matter how bad your life is, you know Sookie's will be worse.
5. If your vocabulary needs work, you might learn something from Sookie's Word-a-Day calendar.
6. These books are perfect for anyone who enjoys finding errors and inconsistencies. In Club Dead you can ponder, among other things, how Bubba got into Alcide's apartment without an invite; or why drinking synthetic blood would possibly help Sookie after massive blood loss; or how Sookie, who is so "well-read" calls it the "Rhyme" of the Ancient Mariner (instead of the correct "Rime").
7. Sookie's willingness to voice and/or indulge every petty impulse she has allows readers to vicariously be shallow through her.
8. Superpowers don't seem so cool after reading these books, so you don't have to feel bad about about being a boring, powerless human.
9. The books are ideal for those with anxiety issues, because there's very little tension and resolutions come quickly.
10. It's hard not to enjoy vampires (and even werewolves), at least on some level.

I still don't get it. But if you want to find out more about Club Dead, read on.

The honeymoon seems to be over between Sookie and Bill, even before he runs off with his ex and then gets himself kidnapped and tortured. That's okay, though, because both Eric and Alcide (a werewolf) are there to take Sookie's mind off her problems with Bill. Conflicted about him and wanting to help after finding out he's gone missing, Sookie risks life and limb to save Bill (even as she's tempted to kill him herself). There's a variety of subplots, mostly involving werewolves and/or Bubba. In the end things are up in the air with Bill, Alcide may be a future love interest, and Sookie's set herself up in a power position among the vampires (although that's bound to backfire). Anything could happen next.

Appearance: Pale humans with skin that glows (although only Sookie can see it). Glistening white fangs.

Strengths: Super speed, strength. Some vampires have the ability to fly. Vampire fangs secrete a healing agent (along with an anticoagulant and a coagulant). Quick healing, if the vampire is well fed.

Weaknesses: Being forced to stay awake during the day, silver, stakes, sunlight, starvation.

Mythology: Vampires almost never have long-term sexual relationships with one another because the "mating" and the blood gives them eternal power over each other. Apparently all vampires are either Celtic or modern pagans since they all celebrate Halloween because it's the ancient festival of Samhain (p. 93). It is considered good etiquette by a human, if they are wounded, to allow any nearby vampires to lick the wound. Vampires need an invitation to enter a private residence, but if the invitation is revoked they are compelled to leave.

Alcide to Sookie: You look like a real woman and not one those sick bitches who get off on hanging around the vamps. [And in one sentence the women's movement is set back 40 years.]

Sookie: Somehow, it had never crossed my mind--I guess since I'm an American--that the vampires who had snatched Bill might be resorting to evil means to get him to talk.

Club Dead by Charlaine Harris. From Penguin (Ace Books).
Posted by Aspasia B at 2:46 PM