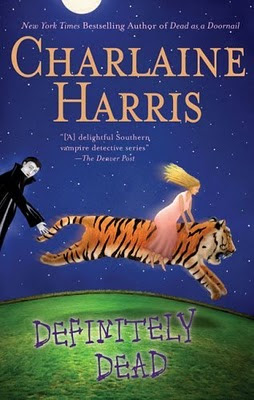 Two steps forward and one step back. I don't like that dance, but apparently Charlaine Harris does. Unfortunately, Definitely Dead is definitely dull.

Just when things were starting to get good, Harris has to go back to all the things I hated about the first few Sookie Stackhouse novels: excessive exposition, a focus on mundane details, sloppy editing, predictability and, as usual, anti-climactic resolutions. Speaking of which, the "sex" scene makes me want to tell Harris to grow up.

Also, I finally understand why everyone loves Eric so much--the scenes he's in are the only really interesting ones. Too bad he's hardly in the books (except for Dead to the World--we need more like that one).

That's not to say Definitely Dead all bad, but the bad definitely outweighed the good this time around.

Some of the better bits:

*New character Amelia Broadway, the witch. She's not written well, but she's still likable. Besides, you've got to like a girl who accidentally turns her boyfriend into a cat.

*The scene where Sookie finds out the truth about Bill. Better than in the show (season 3 finale)--somehow I really felt her pain.

*The fight scene at Sophie-Anne's big party, although it was over far too quickly.

As for the plot, which mostly takes place in pre-Katrina New Orleans, this is how it goes: Boring detail, Sookie has a moment of happiness/calm, CRISIS, crisis resolved. Repeat until end of book. Note to Charlaine Harris: drop the boring detail, have fewer crises/"mysteries" but concentrate more on them (same with relationships). Also, stop finding excuses to include Bubba--that's just annoying. Give him a real reason to be in the story.

Honestly, I wish this series could be rebooted with a different author at the helm. When editing (my day job) a book on accounting is more compelling than finding out what happens next in the novel you're reading, you know there's a problem.

Appearance: Pale humans with fangs that descend or retract at will (or when they're excited). Some vamps have glowing eyes.

Strengths: Super strength, speed, can track humans who have had their blood, ability to glamour most humans.

Mythology: Vampire weddings are ceremonial and political (they're not based on emotion).

The not-so-good: [Sookie] I disengaged and buried my face against Quinn's chest again. I knew I couldn't move away for a minute or two, since his excitement was pressed right up against me. Though these weren't the best circumstances for evaluation, I was pretty sure Quinn was proportional.

The not-so-bad: Carried away on a wave of excitement, Eric kissed me long and hard and then scooped up Wybert's head. "Bowling for vampires," he said happily, and flung the disgusting object at the black vampire with an accuracy and force that knocked the sword out of the vampire's hand. Eric was on it with a great leap, and the sword swung on its owner with deadly force. With a war cry that had not been heard in a thousand years, Eric attacked the circle around the queen and Andre with a savagery and abandon that was almost beautiful in its way.

Definitely Dead by Charlaine Harris. From Penguin (Ace Books).
Posted by Aspasia B at 9:44 AM