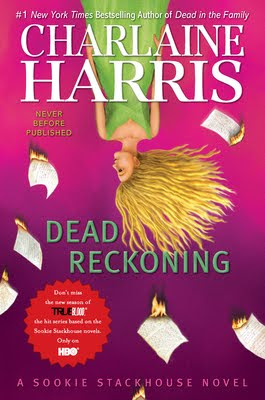 I feel like my world revolves around Charlaine Harris these days. My last several posts have been related to her and her work. Season 4 of True Blood dominates my thoughts. Even the posts I write for Heroes and Heartbreakers seem to disproportionately feature her (for example, this one). I'm not sure how it's ended up this way. Other vampires and their creators beckon for my attention and yet still I return to the Sookieverse. I'm going to have to do something about that. In the meantime, though, you'll have to endure one more Harris review--but at least Dead Reckoning is worth it.

The book starts off well, bringing you smoothly back into Sookie's world. And, of course, it isn't long before trouble begins. A molotov cocktail through the window of Merlotte's leaves everyone wondering who the culprit could be--and who they were after.

I was happy that there was plenty of Eric action this time around, starting early in the book (a nice change!) Unfortunately something odd is going on with him. He's getting into major fights with Pam and is clearly keeping something from Sookie. He's also stressed because Victor is continuing to make life miserable for him and isn't above getting to Eric through those he cares about.

There's also lots of fae action for the fairy fans out there. Although most of it is more disturbing than fun. Incest among fairies was mentioned more than once (suddenly glad I have no fae relatives). And we discover that fae vengeance is not pretty. There are also a number of revelations involving Gran, a fairy artifact, and Mr. Cataliades. We even (finally) find out why Sookie has more fairy attributes than Jason.

Of course there were also the usual annoyances, which for me are mostly due to Sookie, as well as a certain Southern, small-town attitude I can't relate to. Other people may not have an issue with these things, though. But does it not bother anyone else that every non-human species is portrayed as barbaric, or backward, or otherwise less than humans? I've complained in past reviews that Harris writes about vampires but doesn't like them. I think the same can also be said about her other paranormal races. Her scorn might be subtle but it comes through and, for me anyway, it's a constant irritation. There's also the usual sloppy editing (e.g., "DEFCON 4" when the author clearly meant "DEFCON 2"--how hard would it have been to double-check this before letting it go to print?)

One major plot point that really bothered me was Sookie using magic to break her bond with Eric. It seems stupid given all the threats she constantly faces, as well as cruel (Eric thought she was dead). Even worse--she never fixes it. The book ends with the bond still broken. Maybe I'd like Sookie more if she did anything that seemed remotely logical to me.

Dead Reckoning finishes with quite a few loose ends, although it's done intentionally and makes for a decent cliffhanger. In particular Sookie's relationship with Eric is left on seriously shaky ground. Sookie has the means to fix things but between her burgeoning self-hatred and her uncertainty about Eric her only action so far is inaction (I sincerely hope that changes in the next book).

While it wasn't without its problems, Dead Reckoning was definitely one of the better Sookie Stackhouse books. It was interesting and well paced. It sets things up for the future without skimping on what's happening in the present. I lost myself in the story and kept wanting to find out what would happen next. Yet when it ended I was disappointed there wasn't more to read. All in all, I would actually read this one again.

Appearance: Very pale humans with long fangs that extend and retract at will (and also when the vampire feels strong emotions).

Strengths: Some vampires have special skills, such as the ability to fly. Super strength, speed. Fast healing (holding a vampire's severed limb in place while drinking real blood will heal the limb).

Weaknesses: Vampires are beholden to their makers. Stakes. Beheading. Sunlight.

Mythology: When a human drinks vampire blood the vampire can then sense the human and feel their emotions (the more blood is exchanged the stronger the bond). Vampire blood is a potent, illegal, and unpredictable drug for humans.

[Sookie] "In one of those awful moments you have at random, I realized that everyone I'd ever dated--though, granted, that was a short list--was a killer. And so was I."

"It wasn't often you ran into a bondage/Elvis/whorehouse-themed vampire club."

For those of you who can't wait to find out what (might) happen next, Ms Harris drops some hints on her blog for the next book ("Deadlocked"):

While I know where I want to be at the end of each book, I don't always know how I'm getting there. Sometimes I surprise myself. Last night, Sookie got kidnapped, and I'm going to see how that shakes out. A character I thought was dead is probably alive, and I'm real happy for him. Then again, if the work doesn't go so well today, he may be dead again. This is the fun (and the panic) of being a writer. Every day brings decisions, and I have the power of life and death and procreation over all these people I've invented.

I wonder who the possibly dead guy might be (or if we'll ever find out for sure).

Thanks to Laura at Penguin for sending me my review copy.
Posted by Aspasia B at 11:53 AM