From Dead to Worse by Charlaine Harris 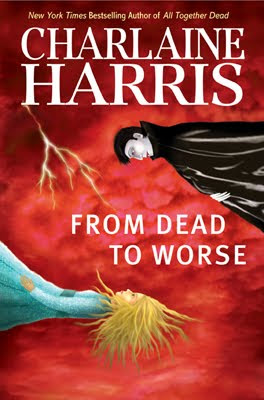 It's funny how, even though I haven't enjoyed most of the Sookie Stackhouse books, I still crave them when I've finished one. I think I've finally figured out the secret to Charlaine Harris's success: she's created the equivalent of literary crack. You know it's bad but you still want more. Luckily, I thought From Dead to Worse was actually pretty good.

For a start (literally), From Dead to Worse had the best beginning of any of the books in the series so far. It's interesting, it draws you right into the story, and it also catches you up on past events without too much repetition or dull exposition. After reading it, I couldn't wait to get to the rest of the book (in fact, I ended up having trouble putting it down).

As usual, there's plenty going on. The Shreveport weres get involved in a war, and not all of them make it (RIP to a character I liked, although not naming names). The war itself is anti-climactic (that happens a lot in the SS books), but there's a cool bit involving Sam.

Sookie gets to meet her fae great grandfather, Niall. I like him. And I like Joe Maganiello (Alcide on True Blood)'s tweet that he'd love David Bowie to play Niall even more. That would be perfect casting. I wonder if an online petition would help? Speaking of long-lost relatives, Sookie also ends up meeting Hadley's young son and, it turns out, fellow telepath. We'll definitely be seeing more of him.

Louisiana is subjected to a hostile takeover by Nevada's vamps and their King, Felipe de Castro (side, possibly interesting, note: castro means castle in Greek). This one is also incredibly anti-climactic. Suffice to say that Eric and Pam make it through okay, although Sophie Anne meets the true death (alas). And Sookie definitely benefits later, when she saves the new King (and Eric); the King repays her by offering her the formal protection of the vampires of Louisiana/Arkansas/Nevada. That protection, along with being a friend of the Shreveport were pack and a beloved relative of a fae prince makes Sookie one powerful telepath, although I don't think she understands that just yet (I hope she won't be all humble and Southern about it).

By the way, I really like Pam. I like her a lot on the show, but I think she's fantastic in the book. Not only does she show up at one point in an Alice-in-Wonderland-esque dress, but she's into embroidery. She's also been known to prove herself deadly in battle. That is my kind of girl.

And Eric has really grown on me to the point where I finally understand the whole cult of devoted fans thronging to him. I can't even put my finger on what exactly is appealing about him, but Sookie had better finally succumb to his charms in the next book. At least they've got that blood bond working for them.

As for the other men in Sookie's life, after he disappears for a good chunk of the book, Sookie breaks up with Quinn. I never liked him all that much so yay for that. And Bill is trying to woo Sookie back. Anyone else thinking she should just go for three-way relationship with him and Eric? Just me, then? I still like Bill so I'm curious to see if anything comes of his efforts (Sookie swears she's done with him but there's an air of protesting too much around it). Oh, and Jason makes himself completely unlikeable so that even Sookie tells him she never wants to see him again. I'm glad he's not quite as big an ass on the show.

There's more too, but you can read it for yourself. I do feel the need to specially mention the cover, as well. You can't see it in the photo above but Sookie's dress and the lightning are glittery and textured. It's a small touch, but a nice one, and it makes this cover that much more interesting than the previous ones. Go, girly glitter!

It's a little difficult to get too enthused about this book because there's a good chance the next one will be craptacular, but if all the Sookie Stackhouse books were like From Dead to Worse, Charlaine Harris would have a devoted fan in me.

Appearance: Pale humans with prominent fangs that extend or retract at will (they also tend to extend when a vampire is angry or excited). Vampires also emit a soft glow, although apparently only Sookie can see it. Some have glowing eyes, as well.

Strengths: Super strength, speed, hearing, vision. Ability to glamour humans. Some can fly or have other special talents. Ability to move silently.

Weaknesses: Silver, other vampires. A wounded vampire will usually heal, but in the meantime they're weak and easy targets.

Mythology: Vampire society is hierarchical with territories presided over by Sheriffs and Kings or Queens. Territories can merge through marriage or by killing the reigning monarch.

[Sookie] If this was The Lord of the Rings and I had a smart British voice like Cate Blanchett, I could tell you the background of the events of that fall in a really suspenseful way. And you'd be straining to hear the rest.
But what happened in my little corner of northwest Louisiana wasn't an epic story. The vampire war was more of the nature of a small-country takeover, and the Were war was like a border skirmish. Even in the annals of supernatural America--I guess they exist somewhere--they were minor chapters...unless you were actually involved in the takeovers and skirmishes.
Then they were pretty damn major.

From Dead to Worse by Charlaine Harris. From Penguin (Ace Books).
Posted by Aspasia B at 11:00 AM