The Gates S1 E2 "What Lies Beneath" 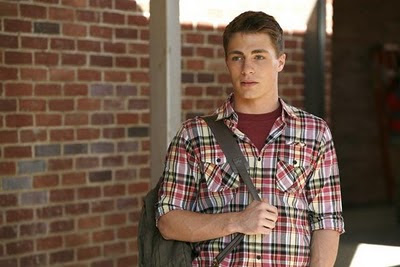 He could swear that was a group of TV execs clutching cancellation notices coming toward him...

Well, I've now watched "What Lies Beneath" twice and if I had to describe it in one word, it would be "yawn."

Okay, maybe I'm being a little harsh; we're only two episodes in to The Gates. But while I thought the pilot episode showed promise, episode 2 does not bode well. Think stupider characters, forced drama, and the inexplicable loss of the subtlety and mystery this show so desperately needs. The dialogue is uninteresting (I had to struggle to find any kind of Sound Bite) and the acting suddenly seems so much worse (maybe due to the larger onscreen presence of annoying kids and Devon). Did I also mention that the opening scene--which could have been awesome--was ruined by poor directing and cinematography (it was confusing and badly lit)? Yeah.

Let's see, Chief of Police Nick Monohan investigates the murder of the former Chief (even though it's not in his jurisdiction). Along the way he discovers that the ex-Chief was taking substantial bribes in order to suppress reports of Gates residents' (including werewolves Lukas Ford and dad, Simon, as well as vampire Claire) misdeeds. Nick ultimately arrests a former deputy, Chad Taylor (played by Devon Gummersall, My So-Called Life), on the flimsiest of evidence. Chad protests that he hasn't even been in The Gates in the last year, which prompts Nick to get suspicious when he sees a box of "Vine of the Soul" tea from Devon's spa. You'd think this would make Nick suspicious about the guy's claim to not have been inside The Gates, but instead he becomes suspicious of Devon. Right reaction, wrong reason, since poor Chad is obviously under one of Devon's spells. When Nick starts poking around the spa and asking Devon questions, she brushes him off by claiming Chad ordered the tea online and had it shipped. Then she gives him a box of the pricey teas. He claims he's prohibited from accepting gifts, but when Devon suggests it's for his wife, suddenly it's fine. Um... no... gifts (aka bribes) to cops are not okay, whether they're for him, his wife, or his great-aunt Ruth. See--stupid.

Meanwhile Devon's been busy threatening Claire over the murder of the contractor. She claims the memory spell she cast on the only witness (Mrs. Cooper) could slip at any time. If only Claire would give her a vial of her vampire blood--for the spell, of course--she could make the spell permanent. Why Claire doesn't rip her throat out, I have no idea. Oh yeah--because of the flimsy premise the show's put in place. Right. More on that in a bit.

The love triangle between high-school cutie Andie, her werewolf boyfriend Brett, and Nick's son Charlie continues. Andie is stressed and confused, so she tries ignoring Charlie--at which point they get partnered on a project. Brett tells Andie he loves her, she's still stressed and confused so she doesn't respond. At all. Brett is angry at Charlie for his obvious interest in Andie but still saves him from getting his ass kicked by Lukas. Charlie ignores Andie, but then instantly agrees to cutting school and going horseback riding with her when she suggests it. Charlie fakes and injury and then kisses her. She kisses him back but then suddenly feels weird and takes off. Got all that? Good, because now you have to process the fact that Andie is half-succubus. A disgusting looking dark vein on her back sent Andie to the doctor, Peg, (I thought she was a witch/herbalist?) Some bloodwork later and it's confirmed that Andie unknowingly took after her dead mom, and is turning into a Succubus "Paramour." Anyone else get the feeling the show is trying way too hard? But I guess they should get some kind of points for originality--I can't think of any other show that includes a succubus. Perhaps for good reason. Anyway, Peg tells Andie's dad (so much for doctor-patient confidentiality) and insists he has to tell Andie right away, or any man she comes in contact with could be in "mortal danger." Of course dad doesn't tell her.

Now back to Claire. First of all, let me just say that one short scene where the vampires extend their fangs is not enough to keep any vampire fan interested. Secondly, there's nothing less impressive than an uptight vampire (Claire's husband, Dylan) who wants to suppress all aspects of being a vampire--except maybe a vampire that wants to unleash but instead conforms to please her husband. Thirdly, no wonder Claire is so disenchanted with the suburban housewife role: she insists on dressing and acting like it's the 1950s (and not in a good way). The role she's chosen to submerge herself in might not be quite so onerous if she acted like a person rather than a stereotype (some of the coolest people I know are suburban housewives).

Now, here's my big problem: Dylan and Claire keep going on about how they moved to The Gates to be in a "safe" place for the sake of their daughter. Why would a pair of vampires think a super small community, under constant surveillance, where everybody knows everybody else's business is any kind of safe environment? Why wouldn't they go to the safest place for a vampire: a big, anonymous city? And if they put their kid in a nice boarding school they could take off if necessary and easily settle somewhere else, leaving the kid none the wiser and unaffected. The Gates is obviously not a safe place for them, so why are they so hung up on living there? Because if they weren't there wouldn't be a show. Sigh.

Remember that vial of blood Devon asked for? Well, to preserve her marriage and make sure things are okay (sorry, safe) for her family, Claire goes ahead and gives it to her. The agreement is that if Claire gives Devon her blood, then Devon will make everything bad stop. Uh-huh. And for good measure, Claire says that if Devon is lying she'll kill her. The fact that a powerful and unscrupulous witch has a vial of her blood--which she can now use to perform any kind of spell, including the kind that will put Claire under her control--somehow didn't occur to Claire. Monumentally stupid. There is no excuse for a vampire this dim--unless she was turned last week, which seems unlikely, Claire should be able to think things through and find solutions to problems like Devon. It's called survival instinct, and vampires are all about survival. Well, most of them, anyway. Most aren't obsessed with staying safe, either. I'm suddenly really missing Damon from The Vampire Diaries.

I'm no longer holding out any hope for The Gates. There's barely any vampire (or paranormal) action, it's rife with forced drama, characters are unlikable and selectively stupid, and worst of all, the vampires are boring. This is a drama/soap opera that's trying to be different by adding a paranormal element. So why does it still seem like every other melodramatic TV show out there? Do yourselves a favour, ABC--stick with Desperate Housewives-type shows. At least people expect those to be lame.

Weaknesses: Their own self-hatred, stupidity, and obsession with staying safe.

Mythology: Apparently they do feel pain.

Charlie: All we did last night was talk. How is that stressful?
Andie: I... I don't know. I'm a girl; I can be complicated without reason or explanation.

Devon: [to Claire] If you ever find yourself in a jam I'm great with kids, and I know how important this little girl is to you. Have a nice day.

The Gates, Season 1 Episode 2 "What Lies Beneath." Written by Grant Scharbo. Directed by David Barrett. From ABC.