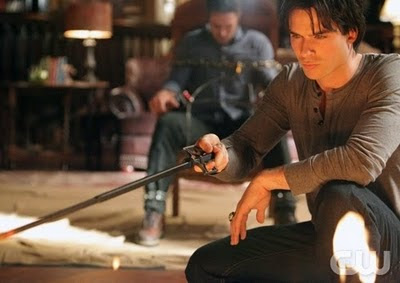 How can something so awesome be so much trouble? Or maybe he's awesome because he is so much trouble. I'm talking about Damon (as if there was any doubt). And I'll get back to him in a minute.

"Plan B" opens with Stefan and Elena in bed. They're being cute and affectionate, as couples sickeningly in love tend to be. Suddenly the camera cuts to another room, this time featuring Mason and Katherine cavorting in bed. There are some nice juxtapositions as the camera cuts between the two couples, and at the end of the scene their words echo one another's, the main one being "promise." I guess no one told any of them they shouldn't make promises they can't keep.

I'm still convinced Elena and Katherine are the same person, by the way. I haven't worked out all the details but we still haven't seen the two of them together with anyone else there. Elena got a phone call from Katherine this episode, but we don't know that Katherine was really on the other end. She could easily have compelled Jenna into picking up the phone at a certain time (I can't remember hearing it ring) and believing someone was on the other end asking for Elena. Either that or someone's been experimenting with cloning technology. Just saying...

Anyway, Damon gets a visit from Jeremy and while he's not too impressed to see him, Jeremy's plea to help with the Lockwood werewolf situation finally wins him over. It does make for an amusing running gag (although I'm not sure it's intentional) as everyone asks what Jeremy is doing with Damon. Alaric is first when he shows up with a boxful of Isobel's research, freshly arrived courtesy of former assistant Vanessa. It's apocryphal but there's a chance the moonstone Mason was so desperate to find can be used to break the werewolf curse. But then the big question becomes why Katherine would want it

Just about everyone else is involved in this week's big event: preparing for the upcoming charity masquerade ball. Mystic Falls is one active little town. Bonnie and Elena are there and they end up having a long conversation about the big V-shaped wedge that's come between them recently. Maybe if Bonnie is so concerned about losing her friends she shouldn't be quite so judgmental.

But speaking of the wedge, Caroline visits her mom, still holed up in the Salvatores' basement, waiting for the vervain to clear out of her system (see last episode). At first Liz wants to keep pretending that Caroline no longer exists, but then she relents and starts asking questions. I guess vampires don't seem so bad when your daughter turns out to be one.

Back at masquerade central, Mason is surprised to see Stefan alive and well. Stefan lets him know that from now on Mason will have to do his own dirty work. As Mason's hurrying out of there he brushes against Bonnie, who ends up having a vision of him and "Elena" kissing. Stefan sees something's up and after Bonnie tells him what she saw, he makes the connection that the werewolf is working with Katherine.

Damon arrives looking to fill Stefan in on the moonstone situation and instead gets the news about Katherine and Mason. After finding out that Mason already has the moonstone, the guys approach Bonnie for help in what could be their one chance to beat Katherine at her own game. Bonnie, vampire lover that she is, doesn't want to help, but ultimately gives in in the face of logic and being asked nicely.

Interestingly, in her conversation with Damon, Bonnie admits that the blinding headaches she induces in vampires are actually multiple aneurysms--as soon as the vampire heals from the first one, she sends along another. That seems pretty sadistic for someone who claims to be morally superior. But it turns out she can do the same thing to anyone, and those who heal quickly (supernatural types) will survive. Bonnie puts the whammy on Mason so that Damon can knock him out. Then Damon puts Mason is his own truck and they drive off. It's a pretty effective plan. By the time Mason wakes up he's chained to a chair in the Salvatores' living room. Damon even had time to cover the carpet (you know, to protect it from stains).

Downstairs, Caroline is still chatting with her mom. I was glad to hear that Caroline is off the bunny diet Stefan had her on. That just seems so wrong. Instead she's pilfering blood from Damon who steals it from the hospital (you'd think the hospital would have better security). As Bonnie is leaving (after getting a vision of a well from Mason, but before the beginning of the torture), Caroline runs upstairs to say hi. Caroline seems harmless enough but Bonnie still wants to keep her distance. But then she has a change of heart and asks Caroline to join her in looking for the moonstone at the well. She also texts Stefan to let him know about the well. As he takes off to look for the moonstone, Elena--who's been twitchy all day because she's not in the loop--abandons their facade of not getting along and runs after him.

I have to applaud The Vampire Diaries for not holding back or shying away from difficult scenes. I'm sure most parents' groups would vehemently disagree with me but their opinions interest me about as much as calculus. Maybe less. But when Damon starts torturing Mason, the scene is not for the weak. I actually wonder how the actors got through it (I imagine with a sense of humour). Without getting into too much detail the torture involves red-hot pokers and wolfsbane (which is the werewolf equivalent of vervain). And while Damon keeps questioning Mason about Katherine and her plans, Mason's remaining quiet on the topic. Pretty impressive for a surfer.

At the well, Stefan easily removes the cover and jumps in. Only to discover he's trapped in a well full of vervain. Ouch. Elena starts panicking but luckily Caroline hears her and comes running, vampire-style. She lowers Elena into the well on a heavy chain and by the time she reaches Stefan he's not looking too pretty anymore. As Caroline pulls Stefan up Elena takes a minute to search for the moonstone. She finds it, along with at least two snakes. The scene that follows is strange: a big deal is made of the snakes, but Elena manages to get out without a bite despite her close proximity to them. Then again, if she's Katherine I guess a snakebite won't be much of an issue (and don't forget, we found out in "Memory Lane" that Katherine is immune to vervain...)

Back at Damon's House of Torture, Mason finally admits that he's getting the moonstone for Katherine so she can break his werewolf curse. When Damon asks why she would do that, Mason answers that she loves him. Damon's response is nice--he laughs and claims that now he gets it--Mason is stupid. Pretty much what we're all thinking, I'm sure. At this point Damon is done with Mason. Realizing Damon intends to kill Mason, Jeremy tries to argue that he should be let go. In a flash, Damon's on Jeremy reminding him that right now it's kill or be killed and Jeremy needs to either suck it up or leave. He then makes the unexpected observation that Mason wants Damon to kill him, that being a werewolf really is a curse to him. Mason doesn't contradict him. Jeremy leaves, looking disgusted, and the next thing we know Damon rips Mason's heart out. With his bare hands. Was not expecting that.

After the excitement at the well, Elena heads home while Caroline returns to her mom and tells her all about what happened. Liz is amazed that Caroline has become so strong and confident. She tells her that Damon doesn't need to compel her--she'll keep Caroline's secret. It's a nice idea but Caroline knows her mom will never trust the others, so she compels Liz herself, including some admirable detail-work. Caroline has clearly found her calling.

Meanwhile Stefan returns with the stone as Damon is texting the mayor's wife (Mason's sister-in-law) from Mason's phone to say he's heading back to Florida long-term and he'll send for his things. Being a known flake makes this story believable. But Damon can't resist calling the last number dialled and gloating to Katherine about killing Mason and stealing the moonstone. The smirk gets wiped off his face, though, when Katherine informs him that he should know she's always a step ahead, that she's got a plan B and C and D...

As Elena and Alaric chat in her kitchen, Jenna speaks to someone on the phone and then hands it to Elena, saying it's for her. It turns out to be Katherine. She's calling to let Elena know how easy it was to get into her house, to destroy all of Jenna's vervain and make Jenna her spy. And to convince Jenna that the world would be better off without her. In the background Jenna suddenly stabs herself with a rather massive knife. At the hospital it turns out Jenna was lucky and will recover, but Elena is rattled and Jeremy is vengeful. In fact, Elena is so rattled she heads over to Stefan's and breaks up with him for real--it's the only way to get Katherine to leave her alone. Of course it's extra tragic because she still loves him, and Stefan sheds more than a few tears. Vampire hearts are so easily broken.

Damon is upset too, showing it probably for the first time ever. As Elena is leaving he stops her and tries to put the blame on himself--he should have known better. But Elena says it doesn't matter--Katherine won.

Katherine, on the other hand, doesn't agree. She's busy compelling Matt. See, she needs a new werewolf so Matt is to go after Ty and not stop until Ty kills him. That's a creepy moment and I can't help but worry for Matt, a character I'm not normally particularly fond of.

This was a brutal episode--dark and stomach-churning and sad. And I loved it. The Katherine-Elena mystery deepens and every week I'm left wondering what's going to happen next. Just when you think nothing more can be done with vampires, along comes a show like this. Well done.

Appearance: Human until the vampire emerges, then dark eyes and facial veins and sharp fangs.

Mythology: Basic vampire nature is the instinct and desire to kill, but it can be controlled.

Mason: What happens when I give you the moonstone?
Katherine: We'll live happily ever after. I promise.

Damon: [after finding out that Katherine is involved with Mason] Mason Lockwood? Werewolf thing aside, the guy's a surfer.

Mason: I love her.
Damon: Oh, I know. I've been where you are. Katherine will only rip out your heart. Let me do it for her.

The Vampire Diaries, Season 2 Episode 6 "Plan B." Written by Elizabeth Craft and Sarah Fain. Directed by John Behring. From The CW.
Posted by Aspasia B at 10:11 PM