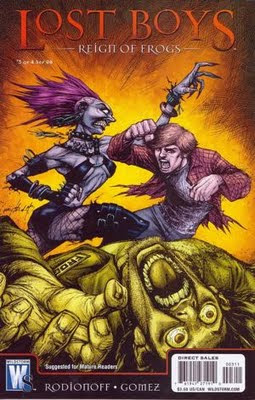 Right, so if you'll recall my review of Issue #2, I wasn't overly impressed with the direction Reign of Frogs seemed to be going in. Unfortunately, Issue #3 has not redeemed it.

The story starts off right after the big reveal of the last issue that grandpa is one of the undead. Sam defends him against the overzealous Frog brothers, who are convinced he's been the head vampire all along. Grandpa, meanwhile, claims he's merely a half vampire who's never tasted human blood--and proves it by taking out his denture-fangs. There's no explanation why he has denture-fangs, but presumably it's so he can feed on the vermin and rodents that sustain him (according to Gramps, squirrel blood is particularly delicious). He claims feeding on animals keeps him from turning into a full vampire, as well as providing raw material for his taxidermy business.

So, cue the next major revelation: the head vampire is... the Widow Johnson, aka the Black Widow of Santa Carla. Partial to the ever-popular dominatrix look, the Widow apparently took a cue from Bordello of Blood (coincidentally also featuring Corey Feldman) when choosing her career path. I have to take a moment here to question: was nothing from The Lost Boys considered sacred? Even the Widow Johnson's minor role has to be rewritten and expanded unecessarily. Was the writer given a limit on introducing new characters, or something? Did they get a deal on printing costs if they re-used all the old characters? Maybe the creators are just super dedicated to recycling. Whatever it is, I think it was applied to the use of original ideas as well. David and the Widow's big plan seems to revolve around getting Sam and the Frogs to her den of iniquity (housed, as they all apparently are, in a Victorian mansion) in order to kill them and, thus, lure Michael and Star back to Santa Carla. Can you tell yet that I'm not loving this?

Also, I'm not sure if I'm missing something but in one panel the whore who invited Grandpa in to wait for the Widow locks him into the room, and a couple of panels later (after he's let the boys in through a window), they're all stalking through the halls, weapons at the ready. This is where an editor comes in handy (or at least a few lines of clarification--did they break the door down? Was there a secret passage? Did they teleport?...)

Miraculously clear of the locked room, their next move is to head to the... wait for it ...dungeon. That's where the real partying happens... blah, blah, blah. Well, it is a vampire brothel in a Victorian mansion--we all knew there would be a dungeon at some point. It's also no shock that the raiding party is beset upon by a horde of scantily clad vampires as soon as they reach the dungeon. Sexy (sort of) bloody action ensues, followed by the one plot development that actually works: Alan is snatched in the confusion and turned. What was probably an inevitable occurrence was well executed and even a little surprising.

So, the pacing and length of the story are still good. The artwork is where it was in the last issue (decent, although a little too stylized); same goes for the framing (acceptable if mediocre). The real disappointment is the writing. The first two issues of Reign of Frogs at least maintained the spirit of the original movie. In Issue #3 the spirit gave up the ghost. The story seems to have degenerated into cliches. The characters have lost their personalities. And even the dialogue--a high point up until now--is lacking. It's like everyone involved just decided to stop trying. My lingering hope that The Tribe will be worth watching is shriveling right along with my enjoyment of Reign of Frogs. It's a shame, really--it started out so well. I wish I could say I'm looking forward to Issue #4 (the final one) to see what happens, but really, I'm looking forward to it so I won't have to keep subjecting myself to this downward trajectory. Too bad.

Edgar Frog: Come on, you damn leeches! Bring it on!

Lost Boys Reign of Frogs #3; art by Joel Gomez. Written by Hans Rodionoff. From DC Comics/WildStorm.
Posted by Aspasia B at 2:46 PM