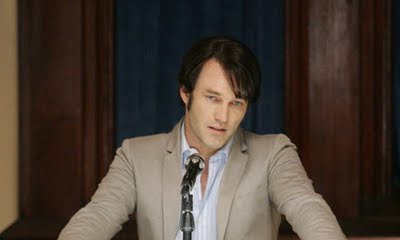 This past Sunday brought us the finale of season 2 of True Blood. No comment on that episode yet, except to say that fans are now facing a year-long chasm before the beginning of season 3 (HBO, we need to have a word). Until then, I plan on getting by with the books (pre-ordered and on their way at the end of the month), repeated viewings of the first two seasons (works for Buffy and Angel too, by the way), and getting caught up on my reviews. Anyone who wants to start a True Blood-withdrawal support group, you know where to find me.

So, there's a fair bit going on in episode 5 "Sparks Fly Out" (I have to mention that I think the episode titles are great, creatively descriptive without being too obvious). It starts out with Bill dropping Sookie off at home after their evening at Fangtasia and subsequent unpleasant encounter with the cop (details here). She's still upset, calling Bill's life crazy and saying she prefers her old boring-but-safe world. Much to my chagrin, he tells her that he won't call on her again. As he leaves we see the dog that may or may not be Sam watching them.

Fulfilling a promise to his upset cousin, Lafayette goes to see how Jason is doing post OD. Of course, he looks like he's wondering why he ever made that promise as Jason uses a sausage to give a cringe-worthy demo of the needle aspiration he had to endure (twice). It's not surprising he never wants to go near V again. What is surprising is that Lafayette argues that Jason just needs to learn how to control the V and then offers to show him how. I'm suddenly reminded of my junior high teachers' warnings that drug dealers lurk around every corner just waiting to get you hooked. Whatever Lafayette's motivation for getting Jason on V, he also lets slip that Tara's been in love with him since she was eight, which somehow turns out to be news to Jason (well, he isn't the brightest).

The next day starts with Sookie's Gran getting angry, threatening phone calls from people incensed that she's invited an abomination (Bill) to speak to her "Descendants of the Glorious Dead" group at the church. At work, Sookie swears up and down she's done with Bill and vampires in general, prompting Sam to ask her out. She agrees to go with him to see Bill speak (she has to go for her Gran's sake) and then for a coffee after.

It's odd to see a vampire making nice with the townspeople. Usually human-vampire interaction is limited to fighting/killing/hiding/screwing (sometimes in combination). Getting along is a rarity, and getting the villagers to put down their torches and pitchforks even more so. But that's more or less what Bill does at the meeting. He starts winning them over right away when he removes "Old Glory" from the cross it was covering (placed there by Maxine and Hoyt Fortenberry due to misplaced concern that Bill would literally explode at the sight of a cross), and claims that as a patriot (another weird thing to hear from a vampire) he would never put his needs before the flag. He then explains that vampires are not minions of the devil, tells heartwarming stories of his Civil War buddies/ancestors of people at the meeting, and gets emotional when presented with an old tintype of his wife and children (hiding his tears, which turn out to be blood). I get the feeling there's something a bit...manufactured about Bill's stories, as though they're heavily edited for a PG audience. I'm not sure if that was deliberate or just accidental, but it seems as though Bill is trying a little too hard to get the residents of Bon Temps to accept him. And they do. By the end of the speech people are lining up to shake his hand, have their pictures taken with him, and hug him (the latter coming courtesy of Terry Bellefleur, a twitchy Iraq War vet who bonds with Bill over their mutual experience of the horrors of war). It's also obvious that Sookie is moved, although the tension between Bill and Sam prevents her and Bill from saying much beyond a couple of pointed remarks.

Jason, meanwhile, is clearly high on something other than life. Sweaty and mussed, he sees trees breathing and claims that sparks are coming off Tara's skin when he runs his hand along it. He also claims that his eyes have finally been opened and that she's the one for him and has been all along. She tells him to come back when he's sober but he swears he'll prove himself to her. Not quite the proof she was hoping for, she catches him not too long afterward enthusiastically nailing a bar skank out back behind the Dumpsters (he does invite her to join them, though. Tara responds by tossing garbage over them).

Sookie and Sam's date starts off well enough, although it's definitely on the dull side compared to the (not exactly conventional) dates she had with Bill. As they chat, Sookie mentions that Sam's thoughts are unlike other people's: his are words mixed with odd sounds and waves of emotion. She also asks him why no one knows anything about him; he responds elusively. But things start going badly when Sam kisses Sookie and she admits she's uncomfortable kissing another man so soon. Sam goes off kilter after hearing she's kissed Bill. He starts grilling her on what else she's done with him, as well as going on another anti-vampire rant, reminding us that not only does he have a problem with vampires, but is also capable of some creepy behaviour. He could well be Dawn and Maudette's killer (although that would be too obvious, and I don't think True Blood is about to take the obvious route). When he angrily pins Sookie against his truck, she's done. She returns inside to call a cab while Sam takes off in a foul mood.

At home again, Bill gets a visit from Sheriff Dearborne and Andy Bellefleur (noticeably reacting to the name Bellefleur, although he doesn't say anything about it). They question him about Dawn and Maudette's murders, and he informs them that if the bodies weren't drained of blood, vampires had nothing to do with killing them. No vampire, him included, would ever be able to resist a fresh corpse full of blood. The Sheriff doesn't seem convinced, but they leave and Bill gets lost in the memory of the night he was turned into a vampire (also the first and last time he saw his family after he went off to war). Back in the present he rages at what happened to him. After his pleasantly bland demeanour at the meeting and with the Sheriff and Andy, it's nice to see him exhibiting some real (not to mention realistic) emotion.

The episode ends with Sookie finally returning home. In the dark she slips on something and skids a little along the floor. Turning the light on reveals a pool of blood and her Gran's body, covered in even more of it. Cut to the credits as Sookie stares in shock.

Okay, so a good chunk of "Sparks Fly Out" is devoted to exploring and exposing the prejudices lurking in Bon Temps. From the relatively minor fears Sookie has about the new and unknown (Tuvan throat singing? She doesn't even know where that is!) to the kind of extreme hatred that leads to women being murdered for associating with the "wrong" kind of people. Even Bill gets called out by Sookie for glamouring and nearly biting the cop just because "traditionally" the police have given vamps a hard time. And somewhere in the middle of all this lie the fears and misconceptions people hold about vampires.

I like that there are no pat solutions offered. Sookie and Bill have to work through their issues on their own; problems aren't magically overcome simply because they care about each other. And just because the misconceptions about vampires (or at least about Bill) are shattered at the meeting doesn't mean that everyone in town is suddenly accepting. Although some people's minds are changed, others remain as wary as ever.

Racism and homophobia are also alive and well in Bon Temps. At the meeting of the Descendants of the Glorious Dead, the Confederate flag is unfurled without any apparent hesitation or self-consciousness (only Tara--standing out in a sea of white faces--reacts), and the Civil War is referred to as "the war for Southern Independence" (which I suppose from their perspective, it was). A trio of rednecks at the meeting (who try vainly to annoy Bill by crushing garlic cloves) later instigate a confrontation at Merlotte's with Lafayette, by complaining about the AIDS in the food that he made. Lafayette puts them in their place, but it's obvious that knowing everyone in town doesn't prevent anyone's irrational dislikes of one another.

The episode is also about loss: Bill's loss of his humanity and family, Jason's loss of his grip on reality, Tara's loss of Jason, and Sookie's horrific loss of her grandmother. Despite a lot of humorous moments, this is one sad episode.

Anyone who still doubts whether a show about vampires can be anything more than fantasy fodder for goth wannabes should spend some time with True Blood. And as the reality of a year-long wait for season 3 sets in, I can at least look forward to re-viewing episode 6.

Mythology and Vampire Culture: Vampires are not affected by crosses, bibles, or churches. They are not "minions of the devil." They do show up in photographs.

Caller: You will go to hell for this.
Gran: (trying to prevent Sookie from realizing what's going on) All right. Same to you. Bye now.

Lafayette: Our blood sustains life. This blood [V] is life.

Sam: (pinning Sookie against his truck) They're not like us. They [vampires] can turn on you.
Sookie: And people can't?

True Blood, Season 1 Episode 5 "Sparks Fly Out." Written by Alexander Woo and Charlaine Harris. Directed by Daniel Minahan. From HBO.
Posted by Aspasia B at 1:59 PM