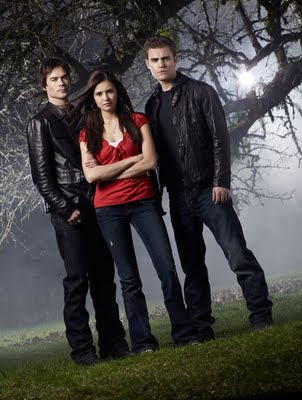 With the popularity of Twilight and True Blood, and the void left by Buffy, it seems inevitable that we'd be getting a new TV series about vampires in high school. Enter The Vampire Diaries.

Set in Mystic Falls (uh-huh), Virginia, the premise is that 17-year-old Elena Gilbert (Nina Dobrev, Degrassi: The Next Generation) is trying to move on from the recent deaths of her parents (in a freak car accident in which she was in the back seat but managed to escape). She instantly catches the eye of the "new" guy in town, Stefan Salvatore (Paul Wesley, Fallen), a vampire who's at least 150 years old and lives with a man he calls his uncle Zack but who is actually his descendant. And just when things were starting to look promising, along comes Damon (Ian Somerhalder, Boone on Lost), Stefan's bad-boy vampire brother, to stir up trouble.

And since this is a teen drama, there are all kinds of subplots going on. Matt is Elena's ex who still carries a torch for her and is suspicious of the new guy. Matt's sister Vicki is the school tramp who had a summer fling with Elena's brother, Jeremy (Steven R. McQueen--grandson of Steve McQueen, and looking eerily like Edward from Twilight). Jeremy still wants to be with Vicki, but she's too world weary to believe he actually cares. Jeremy also still has major grieving issues over his parents and is "acting out" by drinking in public and dealing drugs to his classmates. Elena's best friend, Bonnie, jokes about being psychic only to actually have an unexpected vision of the future. And Elena's best frenemy, Caroline, competes with her for Stefan, whines that everyone prefers Elena to her when she doesn't get him, and then happily catches the eye of Damon. It's no surprise, meanwhile, that Stefan prefers Elena, seeing as how he carries around a picture dated 1864 of a woman named Katherine who is a dead ringer (no pun intended) for Elena (thankfully, this doesn't seem to be going in the direction of a reincarnation storyline). And to complicate things even further, a series of attacks (courtesy of Damon) culminates in Vicki's throat being shredded but not quite killing her. When she comes to in the hospital, with Matt anxiously by her side, she struggles to get out one word: vampire.

Lots going on in Mystic Falls.

As a framework around the story, both Stefan and Elena keep diaries, from which they narrate in voice-overs throughout the show. This was generally well-done, not too intrusive or cheesy, worked naturally into the storyline, and not occurring too often or too seldom. I'm just wondering if it'll get dropped over time, as all the threads of the plot expand and possibly take over.

I was pleasantly surprised with The Vampire Diaries, actually. I was worried it would suffer from either poor production values or an excess of teen melodrama. Luckily, the pilot didn't exhibit either. The effects were few but good. Makeup, lighting, wardrobe were all up to par. The story was engaging. Pacing was all right, dragging a little toward the middle but otherwise fine. Characters were minimally annoying. The problems our teens face are actual problems and not just "Beth wore the same outfit as me *pout*" (hey, that's the sort of thing we were stuck with back in my day--pity us). There's a reasonable amount of realism in the portrayal of the teenagers too: they swear, drink, take drugs, have sex--but not all the time. They actually seem *gasp* well-rounded. Now this is just the pilot so things can change (and the publicity photos I saw of Stefan in football gear are not promising). We'll just have to wait to see where things go.

Now, speaking of Buffy, there were numerous similarities between the two shows. As I mentioned in my review of the first episode of True Blood, there's only so much you can do with a certain type of story and characters, but I think the producers/director of The Vampire Diaries might have let themselves be a little too influenced. Stefan is definitely channeling Angel, right down to the prettiness and brooding (he's also way too old to be a convincing high school student. It would have helped if they'd found an actor under the age of 28). And Damon--surprise, surprise--gives off a strong Spike vibe (particularly pre-chip/soul Spike). Stefan feeds off animals as Angel did after getting his soul (and before realizing butchers have ample quantities of pig/cow blood available), while Damon has no problem killing humans for his meals. He's got Spike's taunting skills down too. They both share the ability of Angel and Spike to silently and suddenly appear and disappear (how long until someone on this show suggests Stefan and Damon put on collars with bells?) They even have their own version of the Gem of Amara, rings that allow them to walk in the daylight without frying. Although the Vampire Diaries books (by L.J. Smith) were first published in 1991 and, therefore, predate Buffy, the show apparently diverges significantly from the novels. It should take care not to spend too much time in Buffy's shadow.

Overall this was a promising start to a new show. Looking forward to seeing the next episode--even if it does include football-playing vampires.

Appearance/Physical Characteristics: Human, until the vampire is unleashed; then eyes darken and dark veins appear on their face. Fangs are prominent canines. No pulse, appear to be dead.

Strengths: Ability to fly, power of hypnotism. Super sensitive hearing. Can control animals (crow) and mist. Can go out during the day if they're wearing their rings. Ability to suddenly appear/disappear (super speed). Super strength. Stefan has the power of his intense stare.

Weaknesses: Will burn in the sun without their rings. Stefan can't always keep the vampire under control. Vampires who subsist on animal blood are weaker than those who feed on humans.

Mythology: Not much mentioned yet, but they wear similar protective rings. Need to be invited in order to enter a house.

Stefan: I am a vampire. And this is my story.

Stefan: It's been 15 years, Damon.
Damon: Thank god. I couldn't take another minute of the 90s.